A Most Violent Year

Directed by J. C. Chandor
An immersive drama about a businessman who stays calm in the midst of a dreadful series of setbacks.

"To be nobody-but-yourself — in a world which is doing its best, night and day, to make you everybody else &mdash; means to fight the hardest battle which any human being can fight; and never stop fighting."

Writer and director J. C. Chandor is a heavy hitter in terms of creating bold and creative films that take us to places we've been before but never with such clarity and vigor. Margin Call, one of the most spiritually literate films of 2011, is a riveting drama about the disaster facing ruthless and successful leaders in the high stakes world of the financial industry. Kevin Spacey plays a man forced to do some soul-searching as he undergoes a long night's journey into darkness and dread.

Chandor's second film All Is Lost made our Most Spiritually Literate Films of 2013 list. From start to finish, this chilling drama puts us in the shoes of a resourceful sailor who finds himself alone at sea when his yacht is damaged and his communications gear destroyed. He proves to be a master of resilience and improvisation as he struggles to stay alive in a losing situation which wears down both his body and his spirit. This substantive and gripping work of art compels us to confront death and our fears of dying alone.

"Keep your fears to yourself, but share your
courage with others."

A Most Violent Year is set in 1981; in New York City, it was the worst year for crime ever recorded. Abel Morales (Oscar Isaac in an Academy Award-caliber performance) is a first generation immigrant who is a zealous believer in the American dream of success. He runs a heating-oil company with his tough wife Anna (Jessica Chastain), the Brooklyn-born daughter of a Mafia kingpin who sold the business to him.

"Trouble is the common denominator of living. It is the great equalizer."

Abel is a resourceful and ambitious man who has worked his way up through the ranks and has a clear vision of what it's like to drive a truck filled with gas or to make sales calls on potential clients. Seeing him interact with workers, we sense their respect for him. But just when this optimistic businessman is in the midst of closing a sweet deal to purchase some prime property for an oil holding facility near the East River, he is decked by setbacks and shocks that rock his inner core and put him in financial jeopardy.

"Most of us can, as we choose, make of this world either a palace or a prison."

Abel's plunge into one nightmare after another begins with a series of robberies where anonymous men beat up his drivers and steal the trucks from under them for the gas. He does not know who is orchestrating these attacks, and this really bothers him. It takes quite a bit of energy to fend off his aggressive wife's characterization of them as being in a war against the other independent oil suppliers. Anna wants to call in troops from the Mafia to help them, but he refuses to respond with violence.He is very upset when the Teamster boss wants to arm his drivers with guns for self-protection.

"You desire to know the art of living, my friend? It is contained in one phrase: make use of suffering."

Abel is convinced guns will only make things worse. The Teamster boss wants him to arm his drivers for their protection, but he refuses. His resistance to using violence is brought home when he chases a prowler out of his home. The next day, Anna finds their young daughter playing with a gun that was left behind.

Another attack comes from the assistant District Attorney (David Oyelowo) who has been investigating the heating oil business and files charges against Abel's company. Then the bank that had promised to provide the loan for the new property withdraws their support. Abel and Anna only have a couple days to find new funding or they will lose their deposit and most of their savings.

"Your work is to discover your work and then with all your heart to give yourself to it."

Chandor is a masterful filmmaker in terms of creating a mood of constant dread and pressure as Morales is tested in a draining series of obstacles to his dream of purchasing the property and expanding his business. His patient and perplexed lawyer Andrew (Albert Brooks) queries him about what he really wants most, and he cannot come up with a simple reply. But he doesn't have to, since he has demonstrated with his deeds what it means to give your heart to your work.

"There is only one of you for all time.
Fearlessly be yourself." 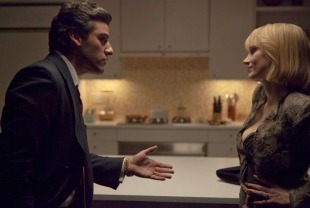 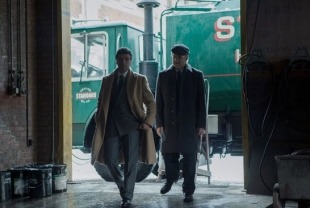 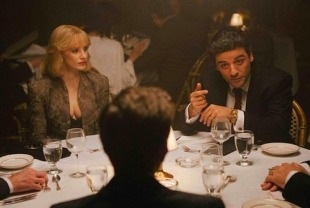