Directed by Robert Schwentke
A dystopian drama that salutes the heroism and compassion of a gifted young woman.

Whereas The Divergent Series shares with The Hunger Games Series a resourceful female heroine, a dystopian society, the power plays of leaders, and the blooming of romance in the midst of chaos and danger, this franchise adds another element to the storyline in its timely celebration of polymathic minds, those who can excel simultaneously in intellectual, artistic, and physical pursuits. Tris (Shailene Woodley), the central character, has three skillsets — selflessness, intellect, and bravery — which give her the edge she needs to survive. Her society is divided into five distinct factions based upon their character qualities; because she exhibits traits of several of them, she is labeled "divergent."

The Divergent Series: Insurgent is adapted from the second of Venonica Roth's three bestselling Young Adult novels. The first book was adapted into the film Divergent. This one focuses on Tris's battle with external enemies, but her biggest battle is an internal one; she is guilty over her role in the deaths of her mother (Ashley Judd) and a close friend. She's not sure she wants to be so different, especially if it means she is "deadly."

In the opening scenes of this futuristic action adventure, Tris and her lover Four (Theo James) are seeking allies among the Amity, Candor, and Dauntless factions. They are being hunted by Jeanine (Kate Winslet), the ruthless and power-hungry head of the Erudite faction. She makes announcements to the whole community branding the Divergents as enemies of the state and then sends her fighters led by Eric (Jai Courtney), her henchmen, after them.

The small band finds sanctuary with the Amity clan, a nonviolent communal society led by Johanna (Octavia Spencer) but soon the heavily-armed army arrives. Tris, Four, and her brother Caleb (Ansel Elgort) flee and end up at the headquarters of Evelyn (Naomi Watts), the leader of the Factionless, outcasts who have to date not been allowed any role or power in the society. She is Four's mother but he wants nothing to do with her since she abandoned him when he was a child. He and Tris head out to find their friends from the Dauntless faction. To Tris' dismay, Caleb doesn't want to join them in planning a way to overthrow the powers that be.

Meanwhile, Jeanine has come into possession of a mysterious box containing a message from the founders of the community; she is convinced it will confirm her policies. But to open the box, she needs to find a Divergent who can pass five simulations. The second half of the film shows Tris undergoing those tests.

Robert Schwentke directs this drama and puts too much emphasis on the visual effects extravaganzas orchestrated by James Madigan. The simulations, replete with long chases and exploding buildings, distract our attention from the emotional conflicts Tris experiences and detract from the time needed to further develop the relationships among the characters.

Still, we are happy to report that the film as a whole salutes the compassion and bravery of a young woman who repeatedly acts from her heart to help or save others. We look forward to the final two movies in this franchise. 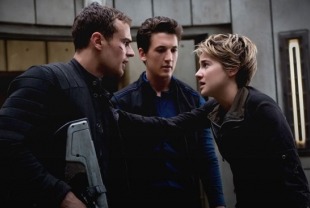 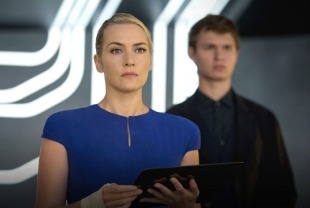 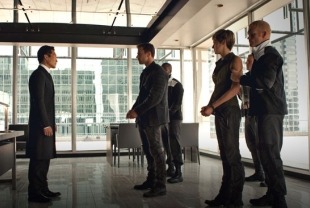 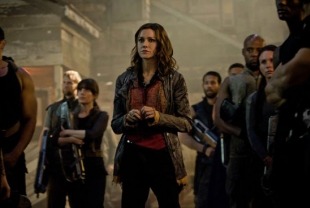 PG-13 - intense violence and action throughout, some sensuality, thematic elemen