Directed by John Curran
An extraordinary drama about a desert trek that becomes a rite of passage.

In 1997, Robyn Davidson (Mia Wasikowska) sets off on an ambitious journey: she intends to walk 2,000 miles from the remote northern Australia outpost of Alice Springs to the Indian Ocean; she expects it will take her nine months. In preparation, she learns how to train wild camels so that they can carry her supplies. At the last minute, Robyn receives a letter from the National Geographic magazine granting her request for financing in exchange for her allowing photographer Rick Smolan (Adam Driver) to chronicle her journey.

In her narration, Robyn expresses her dismay with the onslaughts on "my sex and class" and from the outset she makes it clear "I just want to be by myself." She would prefer to skip the periodic meet-ups with the extroverted photographer, but she soon realizes they are part of the deal. And later in the story, Rick provides just what she needs to carry on --not only once but twice! 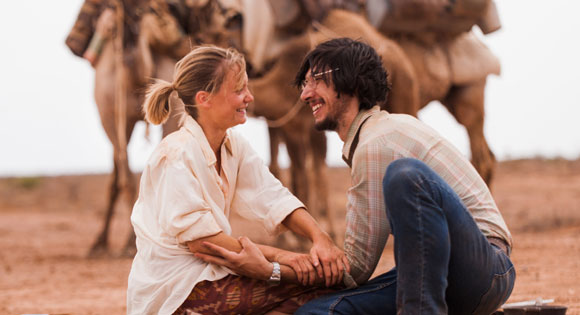 The desert has its moments of beauty, ugliness, and rage -- all of which Robyn, her beloved dog Diggity, and four camels go through together. In one very scary encounter, four wild bull camels charge their camp. With the rifle she reluctantly took along with her, she shoots two of them and the others turn away.

There are sand storms and she sees a mirage. Perhaps one of the most magical moments is when she gets separated from the camels and supplies but relies on Diggity to take her to home base using his acute sense of smell. No wonder she says, "There are three things that make life bearable -- hope, jokes, and dogs. But the greatest of these was dogs." 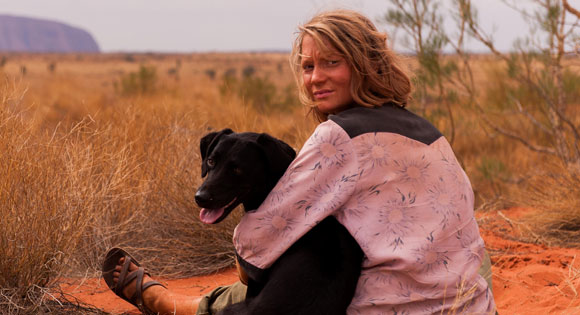 Reaching an outpost, Robyn is accepted by some Aboriginal men and women but told that she will need a man to accompany her; much of the territory ahead has sacred sites and cannot be crossed by a woman alone. Mr. Eddy (Rolley Mintuma) proves to be wise elder who knows everything there is to know about the desert. He also provides the funniest scene in the film by improvising a persona to scare off some of Robyn's unwanted fans.

John Curran (We Don't Live Here Anymore, The Painted Veil) has done a remarkable job translating Davidson's bestseller for the screen. He has assembled a great team in support. The cinematography by Mandy Walker (Australia) makes the most of remote Outback locations, and the music by Garth Stevenson is right in sync with the many different moods of the Anglo nomad.

Curran draws out a top-drawer performance from Mia Wasikowska who previously was superb in Jane Eyre. Here she comes across as an intense and determined 26-year-old woman who love animals more than human beings, treasures solitude, receives the kindness of strangers with openness and humility, and perseveres despite the minor breakdown she has on the last leg of the trek after a very sad setback. Her long journey proves to be a rite of passage as she discovers what she is really made of.

Curran tickles our fancy with the amount of screen time given to Robyn's four camels -- Dookie, Zelly, Bub, and Goliath. By the end of this questing drama, we are well acquainted with these four-legged co-stars, their endurance, their emotional outbursts, lanky legs, protruding eyes, and gurgling and roaring speeches. The DVD includes a special feature "Tracks: An Extraordinary Odyssey."