Directed by Pete Docter, Ronaldo del Carmen
An animated masterpiece that helps us understand, appreciate, and re-frame our emotions.

Many of us are unable to read our feelings, manage our emotions, or create emotionally rich intimate relationships. We lack emotional intelligence. We can explore the farthest reaches of the universe and split the atom but we still are taken aback when forced to deal with our own or others' emotional storms. We take great pride in monitoring our bodies and keeping fit to increase our physical energy yet when it comes to tapping into the richest energy source of all -- our emotions -- we come up empty.

Help is on the way! But it's not in a bestselling book, an intensive therapy program, or an expensive spiritual retreat. You are invited to understand, appreciate, and reframe your emotions through Pixar's 15th animated feature film!

In the opening scene, this question is asked: "Do you ever look at someone and wonder what is going on inside their head?" That is the kind of question we need to ask ourselves every day, especially those of us on a spiritual path. In recent years, the Buddhists have become known for helping people deal with the positive and negative emotions and tame the mind with meditation and other spiritual practices. Other religious and spiritual traditions have also taken up this challenge. Now it's Hollywood's turn. 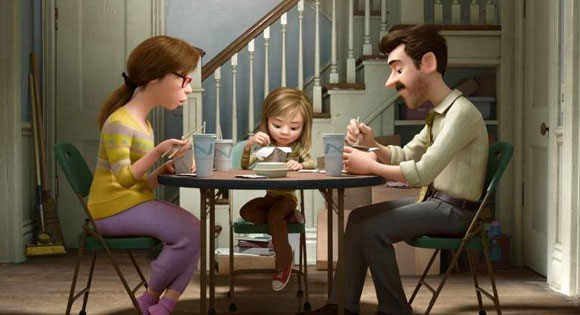 Inside Out revolves around Riley (voiced Kaitlyn Dias), an eleven-year-old girl. In flashbacks, we meet her as an infant and a toddler. She lives with her father and mother (Kyle MacLachlan and Diane Lane) in Minneapolis. Riley loves to play hockey, has a close girlfriend, and is a happy child. She relates well to both parents and loves where they live.

In Riley's mind, called Headquarters, a lot is going on. Joy (Amy Poehler) is the narrator of the story and the leader of four other personified emotions. Colors have been assigned to each of the five: Yellow to Joy; Blue to Sadness (Phyllis Smith); Violet to Fear (Bill Hader); Red to Anger (Lewis Black); and Green to Disgust (Mindy Kaling).

Joy's goal is to do what she can to keep Riley a happy camper, and she's very good at this. Thanks to her, Riley has a group of core memories that support her Inner Islands of Honesty, Family, Hockey, Goofiness, and Friendship. 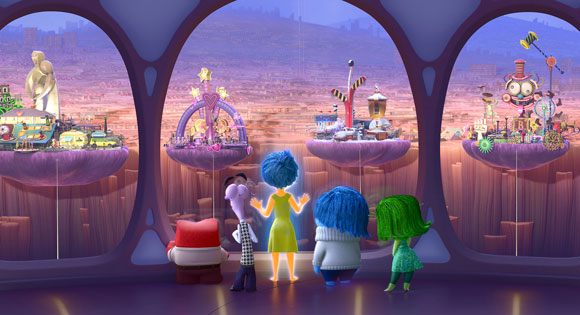 But then without much warning, the family moves to San Francisco. Riley, like any other preteen who is uprooted, tries to adjust but she's not at all happy about this major change in her life. As her hidden and repressed Emotions get more influential, the foundations of her life, and her Inner Islands, start collapsing.

Distressed with these developments, Joy, accompanied by Sadness, goes on a mission to save Riley, leaving Anger, Fear, and Disgust in charge of Headquarters. Along the way, Riley's childhood imaginary friend, a talking elephant named Bing-Bong, joins them.

Inside Out is far and away Pixar's best film since WALL.E and it works so well for the same reason as the earlier film: the script is universal in its humanism and filled with imaginative touches that speak to the hearts of children and adults alike. It's funny (a screening room of critics erupted in laughter during a bit about a recurring jingle in the mind), and it's touching (we guarantee you will tear up with what the characters are willing to do to help each other). Another sign that this film is something very special is that scenes lingered in our consciousness for days after we screened it, and we found ourselves telling people, "It could not have been better." We love the Train of Thought that circles through the Subconscious and the depiction of dreams as productions of a movie studio. 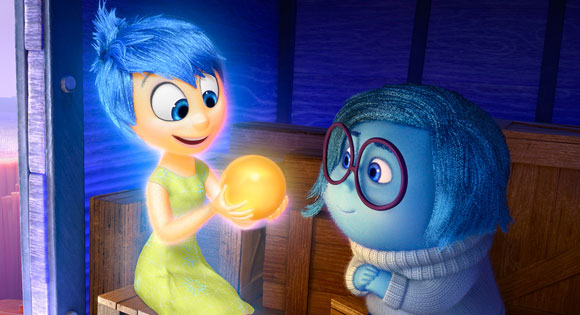 But the most spiritually alluring message of Inside Out is the alliance that is forged between Sadness and Joy. Most of us have been taught to hide, stifle, or camouflage "negative" emotions. Sadness is an emotional state we try to avoid. At first, Joy wants to keep Sadness out of Riley's memories. But then she discovers that some of Riley's happiest memories followed moments of sadness. Joy literally comes from embracing Sadness.

Children's Books: Inside Out Box of Mixed Emotions