Directed by Eran Riklis
A touching and inspiring film by an Israeli director that fosters the spiritual practice of open-mindedness.

We really appreciate the films of director Eran Riklis. Two of them, The Syrian Bride (2004) and Lemon Tree (2009) were on our annual "Most Spiritually Literate Films" lists.The first revolves around a wedding where open-mindedness is needed as the characters navigate through the separations caused by bureaucracy, racial hatred, pride, and prejudice. The second is about a 45-year-old Palestinian who is forced to uproot her lemon trees as a security measure when the Israeli Defense Minister moves into a home just over the wall from her orchard; it demonstrates the role empathy can play in the ongoing Israeli and Palestinian conflict. Another film, Zaytoun (2013), charts the spiritual journeys of a Palestinian teenager from a refugee camp in Beirut in 1982 and an Israeli pilot captured by the PLO.

Now Riklis adds A Borrowed Identity to his astonishing collection of spiritual movies. This gem centers around a Palestinian boy who wins a scholarship to an elite Israeli school in the late 1980s and 1990s. This drama is based on the semi-autobiographical novel of Sayed Kashua who wrote the screenplay.

Similar to about 20 percent of Israel's population, young Eyad (Razi Gabareen) is an Israeli Arab. He wows his community by solving a riddle on a TV show. In addition to his brilliance, he has a stubborn streak that sets him apart from his peers. In the classroom when he is asked what his father does, he answers that he is a terrorist. The teacher raps his hands repeatedly with a ruler ordering him to change his answer. But he refuses. His father (Ali Suliman) did spend some time in an Israeli prison when he was a student but he counsels Eyad not to use the word terrorist to describe him. When his son is accepted into an Israeli boarding school, the whole family rejoices, including the boy's religious grandmother (Marlene Bajali) and adoring mother (Laetitia Eido).

Eyad (Tawfeek Barhom) is the first and only Arab student at the boarding school. There he is challenged to deal with both his Arab identity and his Israeli nationality. Other students make fun of his Arab way of speaking in which Ps become Bs. Naomi (Daniel Kitsis), an incredibly beautiful and gregarious classmate, helps him overcome his Arab accent and they strike up a secret romantic relationship. The love he receives from her provides the balance he needs to sustain him in a place where he is always viewed as an outsider. But this forbidden affair has many strikes against it, thanks to long-standing and deep-seated animosities. 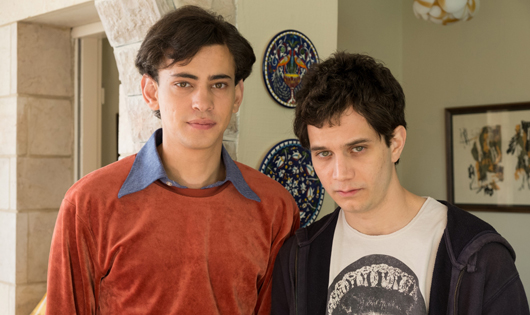 In one of the film's most dramatic scenes, Eyad expresses his disdain for books written by famous Israeli writers in which Arabs are portrayed as sexual animals or examples of "otherness." In order to fulfill a community service requirement of the school, Eyad befriends Jonatan (Michael Moshonov), a Jewish teenager suffering from a muscular dystrophy. They bond over their mutual outsider status and a love of rock music. Jonatan's mother Edna (Yael Abecassis), who takes care of him, is grateful for Eyad's presence and kindness, especially as her son's condition worsens. 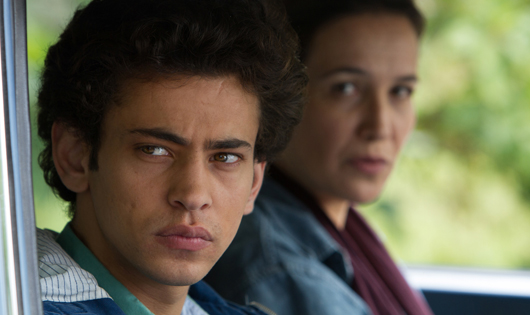 Riklis has many twists and turns left as he follows Eyad's spiritual journey as a young Palestinian who faces difficulties not only from Israelis but also from his own father. Many will have trouble with the ending of this powerful drama, but that is Riklis's intention, to shake us up and to perhaps reframe our views of the long-standing Jewish-Arab crisis. Here open-mindedness, on our part, is all important.