Directed by Paul Weitz
A character-driven comedy about a transition point in an elder's life where she is forced to look at all her relationships.

Elle Reid (Lily Tomlin) is at that transition point in her life when she is taking stock of what is working in her life and what is not. Years ago she made a name for herself as a feminist poet but she hasn't written much since the death of Viola, her long-time lover. Although Elle still teaches and does the occasional seminar, her heart is not in it.

Not long ago Elle decided to pay off her onerous credit card debt. She then snipped up her credit cards and made a mobile out of them to hang on her porch. It feels like she has lifted a great burden off her back.

In the mood for changes, this seventy-something professor decides to end her four-month relationship with Oliva (Judy Greer), a smart but much younger woman. "You're a footnote," Elle tells her, compared to long relationship with Violet. After a shouting match, Olivia leaves her keys on the table and departs. 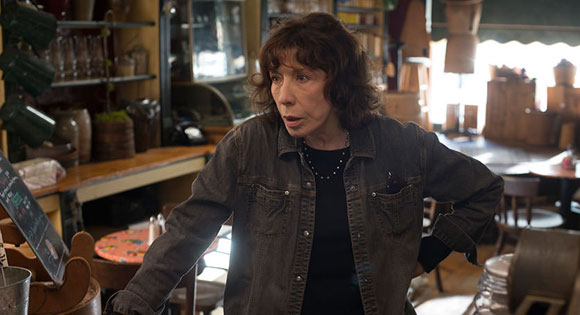 Shortly afterwards, Elle's granddaughter Sage (Julia Garner) appears looking pale and sickly. It turns out that she is pregnant and has already made an appointment to get an abortion. But she has no money and wants her grandmother to give her $600. Elle doesn't have that kind of money, so they visit some of her friends. They do get a contribution from a transgender tattooist (Laverne Cox) but have no luck with a cafe owner (the late Elizabeth Penna) where Elle tries to unload some first editions of her books.

As their quest continues, Sage gets more and more frustrated with her grandmother's anger which erupts first at a coffee shop where the owner asks her to leave for talking so loud about abortion and second, at her boyfriend Cam's (Nat Wolff) home where she pummels him with his own ice hockey stick for being such a deadbeat dad. 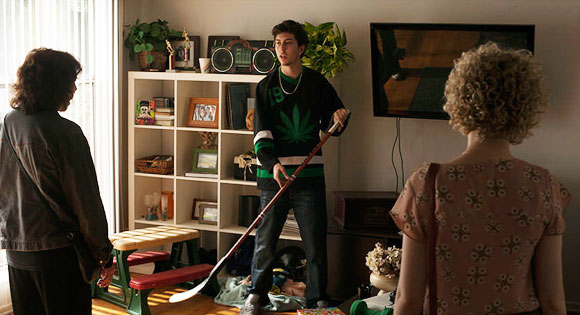 These fireworks are mild in comparison with what happens when Elle and Sage visit the mansion of Karl (Sam Elliott), the man she married and then ditched without a word of explanation 30 years ago. Powerful waves of volatile emotions threaten to swamp them as they dredge up feelings of guilt, disappointment, regret, and betrayal.

All these failed attempts to raise the money for the abortion lead the two women to Judy (Marcia Gay Harden), Elle's daughter and Sage's mother, an immensely successful lawyer. She isn't keen on either of them. She has lost touch with her mother, whom she thinks is a freak, and she unloads a deluge of criticism on Sage for her immaturity and irresponsibility. 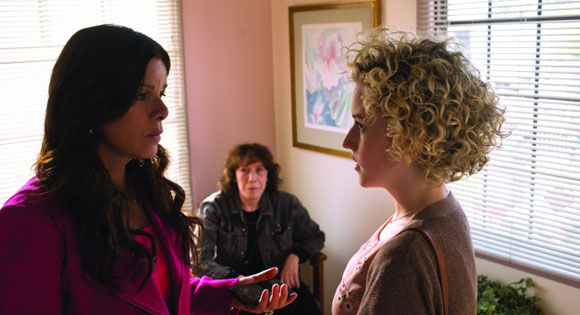 Writer and director Paul Weitz draws out a near-perfect performance from Lily Tomlin whose comic timing and nonconformist ways make this character-driven drama one of the funniest films of 2015. He also coaxes out a sensitive portrait of one of love's walking wounded from Sam Elliott who played a totally different kind of elder in I'll See You in My Dreams.

R – language and some drug use