Directed by Bill Condon
One last case for the elderly detective that convinces him to cherish the mysteries of his existence.

The famous English detective Sherlock Holmes (Ian McKellen) has retired and now at the age of 93 resides in the Sussex countryside where he tends to his bees. The year is 1947, and he has just returned from Japan where he obtained an herb called prickly ash which is said to enhance longevity and prevent senility. His host (Hiroyuki Sanada) finds the herb when they go to a garden in a bombed out region of Hiroshima to witness the havoc wrought by human destructiveness.

The detective, who has always prized his reason and quickness of thought, is bothered and bewildered by memory loss. He must now write down things on the cuff of his shirt so as not to embarrass himself before others. His doctor, who wants to put him in a nursing home so others can look after him, is rebuffed by Holmes. 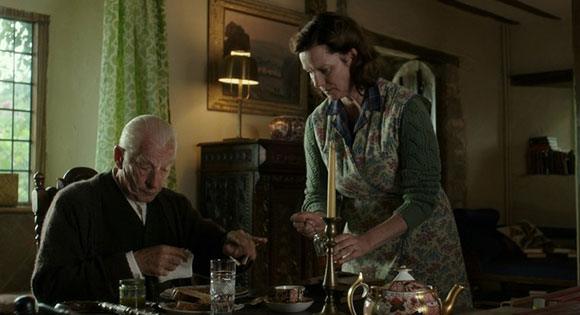 The detective's present housekeeper is Mrs. Munro (Laura Linney), a recent war widow with a young son Roger (Milo Parker). The boy befriends the lonely old man who is happy to be a surrogate father and pass on his knowledge about the art of tending bees. Mrs. Munro, who expects to leave for another position soon, worries about the boy getting too close to the old man. 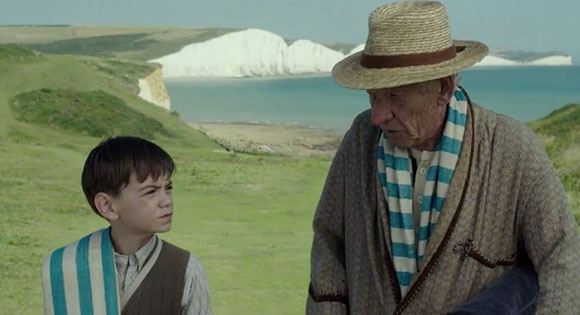 The legendary detective has one last mystery to solve, a case that he never finished to his satisfaction. He is writing it down in order to reconstruct what happened 30 years ago. Roger is fascinated by this story.

Homes is approached by an upset husband named Thomas Kelmot (Patrick Kennedy) whose wife Ann (Hattie Morahan) is depressed after the deaths of two children during pregnancy. She is acting very strangely. After following her around in order to uncover her secrets, Holmes has a close encounter with her that unhinges him. Here his reason proves itself to be an inadequate tool to assess the emotional state of this beautiful young woman. 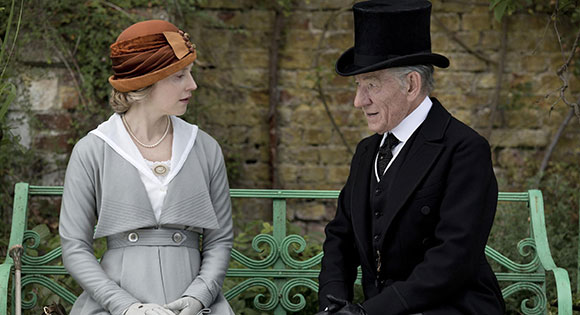 Mr. Holmes is directed by Bill Condon based on a 2005 novel A Slight Trick of Mind by Mitch Cullin. The nuanced screenplay by Jeffrey Hatcher, an American playwright, vividly conveys the emotional inner work which must be done in the last stages of life. Who is the real Sherlock Holmes? Is he the detective slipping into theatres to watch movies made about his amazing skills of detection? Is he somewhere there inside the fictions created by Doctor Watson where he wears a deerskin hat and smokes a long curved pipe? Or is he the old man saddled with a large bag of regrets and unfulfilled yearning?

Annie Dillard has written: "Our life is a faint tracing on the surface of a mystery." Holmes comes to see and accept this perception. He cherishes the baffling, curious, hidden, and inscrutable dimensions of his existence. A mystery, he discovers, lives outside the hallowed precincts of reason and logic. Instead it travels the simple path of humility, vulnerability, and peace. Ian McKellen deserves a standing ovation for his sensitive performance as Holmes and this feat is admirably accompanied by the standout acting of Laura Linney, Milo Parker, and Hattie Morahan.