Directed by Todd Haynes
A mesmerizing and emotionally rich movie set in the 1950s about a shop girl and an older well-to-do woman who fall in love.

The extraordinary opening scene in this mesmerizing movie directed by Todd Haynes is meant to take your breath away – and it does. When Therese (Rooney Mara), a sales girl in a fancy department store, looks up and sees Carol (Cate Blanchett), a tall, elegant beauty in a fur coat, her glance turns into a swooning gaze. The well-to-do older woman is pleased with what is transpiring between them and she begins her own special brand of seduction, which involves purchasing an expensive toy train suggested by Therese as a Christmas present for her daughter (Sadie and Kennedy Heim) and then leaving her gloves on the counter.

In this beguiling scene, we are drawn into the emotions of two women whose love at first sight slowly unfolds into sexual desire and choices that must be made about the importance of their affair of the heart. After meeting in a restaurant, they begin a subtle dance of connection despite their class and financial differences. Standing in the way of further intimacy between them are two desperate men: Carol's soon-to-be-divorced husband Harge (Kyle Chandler) who claims to still be in love with her and Therese's boyfriend Richard (Jake Lacy) who has proposed to her and been rejected. Carol's abusive husband is already jealous of Carol's former lover, Abbey (Sarah Paulson), who is now her best friend. 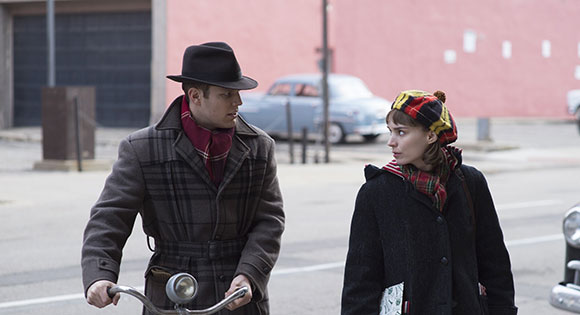 Carol and Therese decide to leave behind the anger and bitterness of these abandoned men and take a road trip to the Midwest for the Christmas holidays. For much of their time together in the car, they do not talk about much. The yearning they have for each other is finally consummated in a poignant scene of sex laced with desire, tenderness, and vulnerability.

Carol is based on The Price of Salt, a 1952 novel by Patricia Highsmith who wrote under a pen name because its lesbian love affair was so shocking at that time. The film conveys the stifling atmosphere of the 1950s but doesn't overly emphasize that aspect of the story. Screenwriter Phyllis Nagy (Mrs. Harris) demonstrates an emotional literacy that is essential to this story's satisfying outcome and its universal appeal up to our own times. 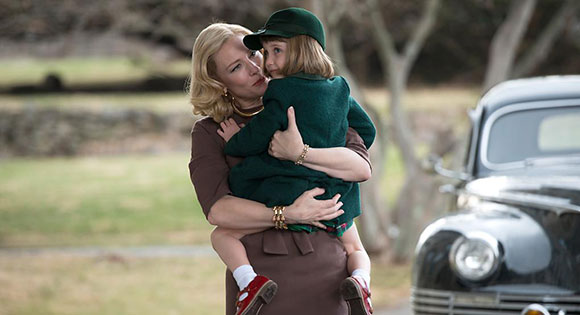 When Carol learns from her lawyer that Harge is trying to get full custody of their daughter based on evidence of Carol's immoral behavior with Therese, she returns to New York City to do battle in law offices. Such is the painful nature of love and loss, always intertwined and almost never far apart.

Therese is left with her life in shambles. She takes up photography and lands a job doing something she likes. But deep in her memory are Carol's words about her: "You are an angel . . . flung out of space." 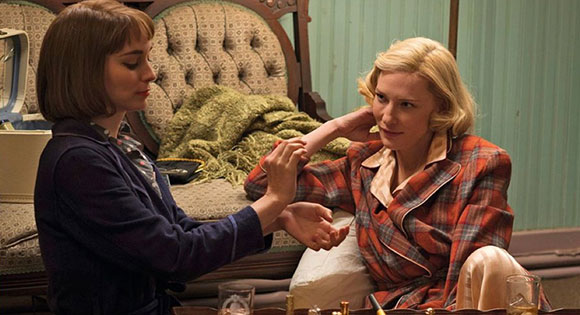 Rooney Mara makes the most of her role as the nineteen year old who has never had a lesbian relationship. She shines in her performance, but Cate Blanchett glows even more brightly as the more experienced woman who is so nurtured and nourished by Therese's love that she is willing to take a step so daring it even stuns her.

Adding graciously to the standout acting of these two women are the beautiful cinematography of Ed Lachman and the emotionally rich musical score by Carter Burwell.

R- a scene of sexuality/nudity and brief language