Directed by Jim McKay
An extraordinary coming-of-age movie about three girls living in a poverty-stricken neighborhood whose daily wanderings and intimate dramas during the last weeks of summer reveal their deep reserves of hope.

Lanisha (Kerry Washington), Joycelyn (Anna Simpson), and Maria (Melissa Martinez) are three teenage friends whose school in Crown Heights, New York, has been closed for asbestos removal. During the last few weeks of the summer, they have to decide where to go next. It turns out to be a time of transition in more ways than one.

In this extraordinary film written and directed by Jim McKay (Girls Town), the daily wanderings and intimate dramas of the three girls are played out against the harsh realities of their poverty-stricken neighborhood. They are members of a famous marching band, the Jackie Robinson Steppers, that is practicing for a Labor Day parade. Scenes of their rehearsals punctuate the story and pump up our emotions as we watch these kids strut their stuff and their pride.

Lanisha and Maria are thrown closer together when Joycelyn takes up with two more popular girls from school. She works in a fancy boutique and has dreams of opening a store of her own, if her singing career doesn't materialize. In one of the many magical moments in the drama, Joycelyn, alone in her bedroom, addresses her fans and then falls back on her bed to recite a poem she's written.

Maria, whose father is in prison, lives with her harassed mother and her younger brother, a budding chauvinist who has already started to order her around. When she learns she is pregnant, she turns to Lanisha, who takes her to the clinic where she had an abortion. Later, when Lanisha has an asthma attack, the two girls end up in the emergency room. For most of the film, however, we follow their more routine activities — walking around the neighborhood, shopping, partying, and practicing with the band.

Lanisha seems to have the strongest support system in place. Her parents are divorced, but she keeps in touch with her father, who works as a doorman in a luxury building; they enjoy talking about music. Her mother is sympathetic and understanding, able to offer comforting words of love and support when they learn that a girl not much older than they are has committed suicide, taking her young son with her.

Although there have been plenty of coming-of-age movies, few have focused on girls, and few have achieved such a ring of authenticity. Our Song stands head-and-shoulders over other films in this genre with its keen and inventive portrait of the challenges facing the three friends. And while the setting is a primarily African-American and Latino neighborhood, these girls could be from anywhere. The lead actors are newcomers to the screen, and they deliver amazingly natural and nuanced performances.

In Jonathan Kozol's Ordinary Resurrections, a mother says to him, "I'm tryin' to sustain," meaning that she's struggling to keep up her spirits during hard times. In this drama Joycelyn shares a bonding moment with her mother while paging through a fashion magazine. Maria decides to keep her baby, even though she knows the father won't be of much help. She just refuses to see the pregnancy as a negative development in her life. And Lanisha travels a long distance to register at a new school, even though it means leaving her friends behind. "There are times in life," Jean Giono has observed, "when a person has to rush off in pursuit of hopefulness." That's exactly what these three girls do, and we wish them well.

The DVD has an audio commentary with director Jim McKay, a “making of” featurette, and the trailer. In a text section, there is an interesting article about the Jackie Robinson Steppers, the actual band from Brooklyn. 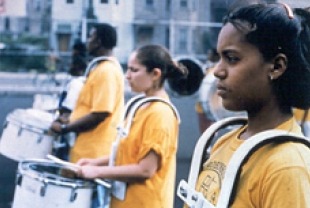 R - language, some teen drug use