The Secret Life of Pets

Directed by Chris Renaud, Yarrow Cheney
A delightful and funny animated family film about the playfulness of animals.

Many of the most entertaining videos posted on YouTube or shared on social media sites show animals at play. We love to watch kittens frolic on the floor, batting paws at each other, jumping up and down, and then running swiftly around the room. We relish seeing what pets discover through their natural curiosity about the world. Particularly popular are videos of animal allies – cats and dogs and birds and wild animals who have somehow managed to bond and have adventures together.

The Secret Life of Pets is an animated family film that celebrates the central place of play, curiosity, and companionship in the lives of a crosscut of urban animals who have a series of adventures while their human companions are away from home. 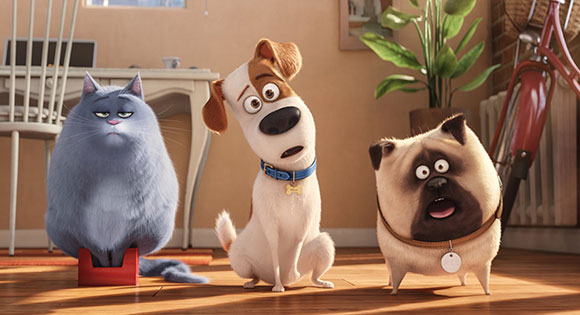 Max (voiced by Louis C.K.) is a cute Irish terrier who enjoys a close and meaningful relationship with his owner Katie (Ellie Kemper). Every day he sits by the door, eagerly awaiting her arrival home after work. But this cozy and exclusive relationship ends when she adopts Duke (Eric Stonestreet), a large and scruffy dog who takes over Max's bed and food.

All the pets in the neighborhood drop their predictable behavior and revert to animalistic antics when their human companions are away. A poodle turns off the classical music and delights in dancing to heavy metal music. Chloe (Lake Bell), a very fat cat, enjoys raiding the refrigerator in her apartment. Gidget (Jenny Slate), a beautiful little white dog who has a crush on Max, tries to get his attention. 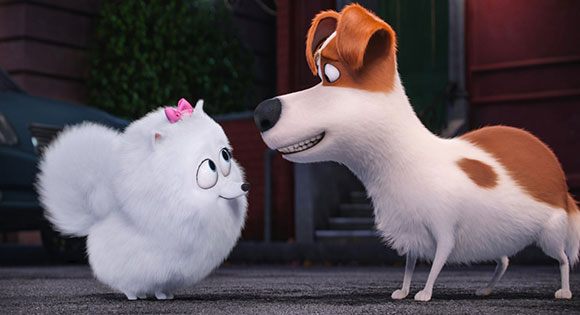 When Max and Duke are accidentally left behind by the dog walker and are picked up by Animal Control, Gidget, the other household pets, plus a trained falcon (Albert Brooks) set out to find them. They run into trouble with a large contingent of "flushed pets" – feral cats, crocodiles, snakes, rats, and other animals led by a fierce bunny named Snowball (Kevin Hart). Meanwhile, as they orchestrate a series of escapes and close calls, Max and Duke learn to rely upon each other and become buddies.

Chris Renaud and Yarrow Cheney serve as directors for this funny and endearing tale which will appeal to children and adults alike, especially animal lovers. Animal psychologist Marc Bekoff describes a behavior of dogs and their canine cousins, wolves and coyotes. They tilt their heads down in a "play bow" to send the message to other animals that "I want to play!" 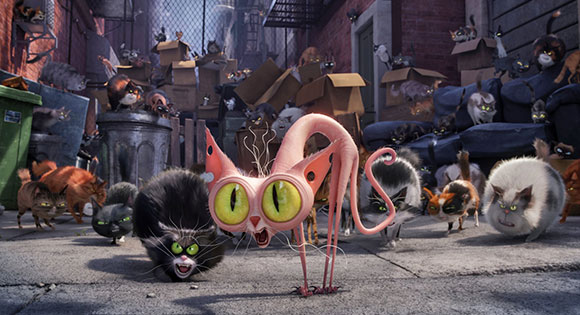 Before you begin watching this family film, play bow and then enjoy witnessing the rambunctious energy of animals as they learn some valuable lessons in the city.

PG – action and some rude humor