Directed by David Lowery
A very special family film with its spiritual depiction of awe and wonder in the face of an astonishing wild creature.

In Last Child in the Woods, Richard Louv points out the dire side effects of "Nature Deficit Disorder" upon children who have little or no contact with the outdoors. They include diminished use of the senses, attention problems, and increased emotional and physical diseases. Today's wired generation are particularly susceptible as the use of technology replaces direct experience. Kids today may able to spout data about the Amazon rain forest but they've logged no time in the nearby woods. Or as one fourth grader said in an interview with Louv: "I like to play indoors 'cause that's where all the outlets are."

We thought of how much people miss when they spend no time in nature when we saw David Lowery's inventive and emotionally touching remake of Disney's 1977 fantasy Pete's Dragon; this version combines live action with a computer-generated dragon. 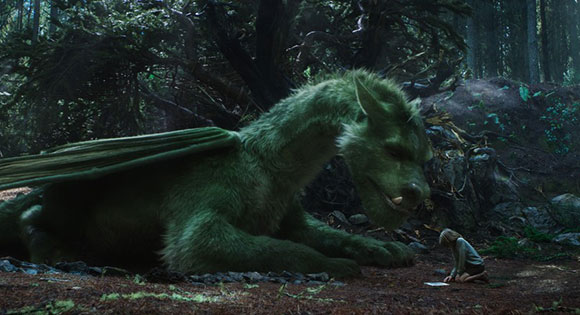 Five-year-old Pete (Levi Alexander) is traveling with his parents in the Pacific Northwest. He's sitting in the back seat of the car reading his favorite book when his father swerves the car in order to avoid hitting a deer. The car spins out of control and down a hill into a dense forest. Although his parents both die in the crash, the little boy survives. As a pack of wolves encircle him, Pete is rescued by a giant green dragon whom he names Elliott.

Six years later the feral youth (Oakes Fegley) has forged an intimate friendship with the nurturing dragon whose loving grunts display a wide variety of emotions. They have created a tree house and a comfortable cave where Pete sleeps nestled in Elliott's fur. The dragon is especially good at playing the game hide-and-seek since he can become invisible at will. This gifted creature can also fly, even though he wobbles a bit. In one incredible scene, Peter leaps off a cliff and Elliott swoops down and catches him before he hits the ground. Not even the boy and E.T. in that movie had so much fun together! 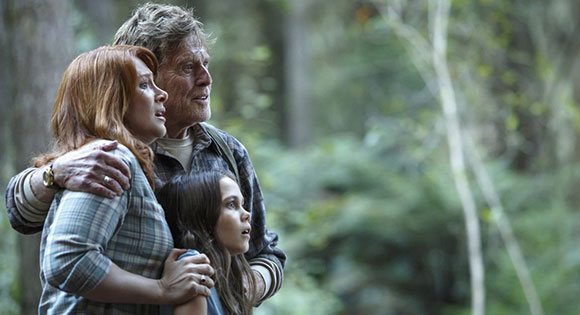 The narrator of this special-effects parable is Mr. Meacham (Robert Redford), the only person in the town who has ever seen the legendary dragon in the woods. Most citizens in Millhaven have heard stories about this monster with great powers but have not seen him. Meacham in a discussion with his daughter Grace (Bryce Dallas Howard), a forest ranger, says "Just because you don't see something doesn't mean it's not there." She responds, "And just because you say it's true doesn't mean it is." Her father then admits that she knows a thing or two, but only if it is staring her in the face. He makes a good observation that could apply to us as well: "If you go through life only looking at what's right in front of you, you will miss out on a whole lot." 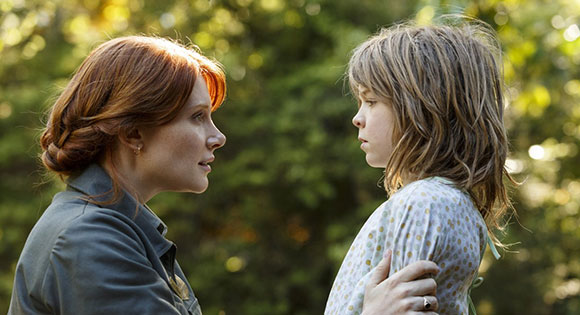 Director David Lowery and co-writer Toby Halbrooks have created many scenes spiked with awe and wonder. Anyone who has experienced goosebumps in an encounter with a wild creature will be reminded of that moment watching Elliott and Pete together. We marvel both at Elliott's size and his closeness to the boy; we totally accept that to Pete this strange being is as familiar and important as any humans he's met. Meacham is in sync with this mystical connection and calls it "magic." What does it mean to him? He tells Grace that "it changes the way I see the world – the trees, the sunshine, you." 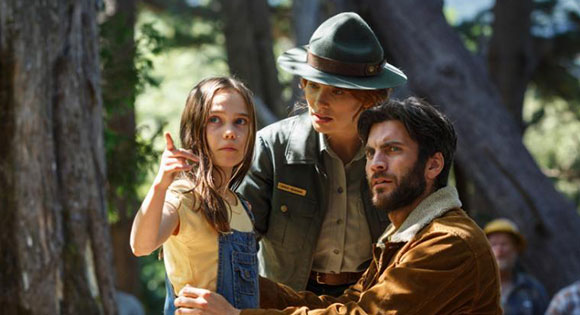 In the last half of Pete's Dragon, ten-year-old Natalie (Oona Laurence) spots Pete in the woods. She is the daughter of Grace's fiancé Jack (Wes Bentley) who runs a logging business. They take Pete to town and try to figure out where he came from and how he survived so long on his own. 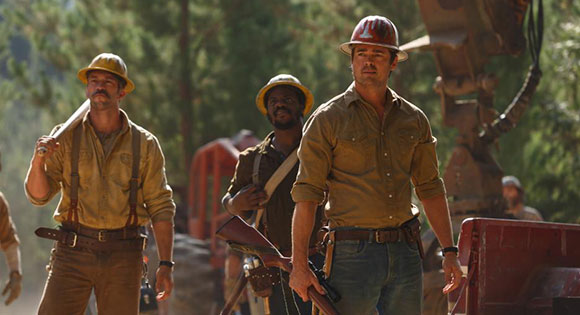 Meanwhile, Jack's brother Gavin (Karl Urban), who has been felling trees near Peter and Elliott's home, discovers that the fabled dragon in the woods is real. He organizes a hunt with the hopes of putting him on display in captivity.

Pete's Dragon is a very special family film with its themes of interspecies friendship, a spiritual depiction of awe and wonder in the presence of an astonishing wild creature, and a subtle environmental critique of aggressive deforestation.