Directed by Mira Nair
A celebration of the manifold accomplishments of a young African chess prodigy.

Not many directors have been able to convey the beauty of a crowded street, or the chaos of a jam-packed market, or the traffic jam of too many people and vehicles in an African slum. Yet this is the setting, effectively recreated, for director Mira Nair's drama about a young girl who begins playing chess and demonstrates her talent and mettle in many competitions. The thematically rich screenplay by William Wheeler is based on a book of the true story by Tim Crothers.

Queen of Katwe is one of the most Spiritually Literate Films of 2016. In a world where young girls are still treated poorly, denied access to education and the traditional realms of business and the marketplace, here is the enthralling drama of a girl who begins an adventuresome journey into the male-dominated sport of chess competitions. She stands alongside the Maori girl in Whale Rider whose ardent and determined struggle is to achieve her destiny and fulfill her dreams. Both young women want to find their rightful places in their communities. 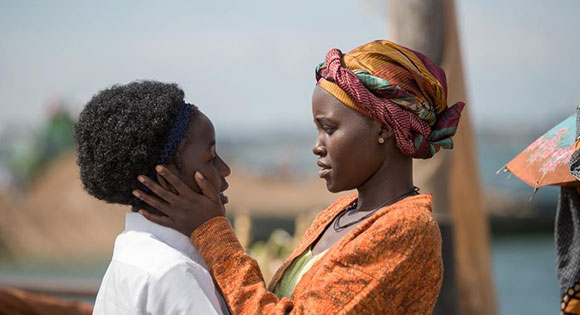 Phiona (Madina Nalwanga) lives in poverty in a shantytown just outside the capital city of Kampala, Uganda. Her mother Nakku Harriet (Lupita Nyong'o) is a feisty single parent who sells food on the streets in order to take care of Night (Taryn "Kay" Kyaze), an independent teenager, Phiona, and two younger sons. It is a hard life where the children do not have time to go to school. Phiona fetches and carries water, sells vegetables to people in cars, and looks after the younger children.

The day she discovers the mysterious and wonderful world of chess is the beginning of a transformed life that lies far beyond her wildest fantasies. Robert Katende (David Oyelowo) is a missionary and former soccer player who runs "The Pioneers," a chess club for youth in an abandoned church. Having been orphaned at an early age, he has chosen to become a sensitive and serious mentor for these kids who are treated like second-class citizens because of their poverty and lack of resources. 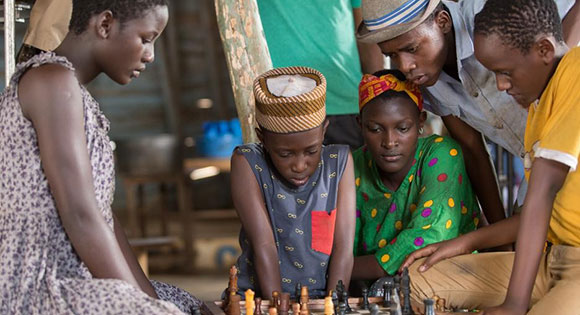 When the boys in the chess club ridicule Phiona because she smells, she attacks one of them. Katende commends her saying "She's a fighter. . . . Welcome, this is a place for fighters." He is endowed with the same capacities of grit and determination, character qualities he seeks to teach to his Pioneers. In a very revealing scene, Katende turns the tables on a bigot who has no respect for poor youth and thinks that they should not be allowed to compete in tournaments held in luxurious private schools for the rich.

Throughout the movie, we identify with Phiona who, even though she quickly establishes herself as a chess prodigy, struggles with feelings of doubt about her abilities, fears about the future, and concerns about her relationship with her dominating mother. Phiona is close to her older sister Night but saddened when she moves away to live with an older man. 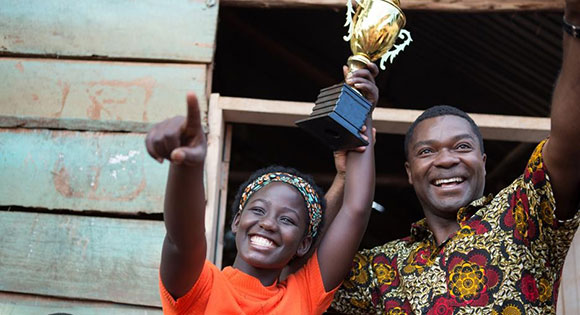 We are captivated watching Phiona's pride in her triumphs on the chessboard, and then distressed when she succumbs to depression after convincing herself that she is not good enough to achieve her highest dream of being an international chess master. Here is wise advice that comes to Phiona from different people and from her inner self:

Mira Nair has always had a keen appreciation of place in the lives of the characters depicted in her thought-provoking dramas. In Salaam Bombay, Monsson Wedding, The Namesake, and Amelia, she has taken a loving and long look at places where human beings can nurture and sprout dreams of passion, bliss, peace, and contentment.

In Queen of Katwe, she presents the city of Katwe as a dynamic and colorful stage. Life swirls through the place as people maneuver through crowds on muddy streets and alleyways strewn with garbage and litter. The film also asks us to ponder the more philosophical meanings of place, such as when Katende says to Phiona:

Hats off to Nair for drawing out superlative performances from the three lead characters in this true biographical drama. In her premier acting role on the large screen, Madina Nalwanga is radiant, authentically displaying the emotional rollercoaster Phiola undergoes in the competitive world of chess. David Oyelowo, who was so fine as Martin Luther King, Jr., in Selma (2014), reveals the loving care of a surrogate father, the wisdom of a gifted mentor, and the earnestness of a chess teacher who humbly accepts that Phiona has talents which reach far beyond his own. And last but not least, Lupita Nyong'o, who won an Oscar for her performance in 12 Years a Slave (2013), pulls out all the stops in her poignant depiction of Phiona's mother — a stubborn, courageous, and traditional mother who wants only the best for her children. When Harriet says to Phiona "You're my spice," our hearts go out to this memorable mother and daughter who repeatedly bring tears of joy and sadness to our eyes during the unfolding evolution of their intertwined lives.