Directed by Steve James
The little-known story of the trial of a Chinatown family-owned bank in the wake of the financial debacle of 2008.

Steve James is an acclaimed documentary filmmaker known for Hoop Dreams, The Interrupters, and Life Itself, which demonstrated creative approaches to basketball, urban violence, and the struggle to square off against death. What those films have in common is the director's empathy. It is on display again in this documentary.

In the wake of the 2008 financial crisis, only one bank, Abacus Federal Savings Bank, faced criminal charges. Although JP Morgan Chase, Citigroup, Wells Fargo, Goldman Sachs, Bank of America, and HBSC all participated in widespread and malevolent mortgage fraud, none of those banks were charged with crimes. Why? Because they were seen as "too-big-to-fail." Even more mind-boggling, these Wall Street giants received multi-billion-dollar bailouts following the financial meltdown. 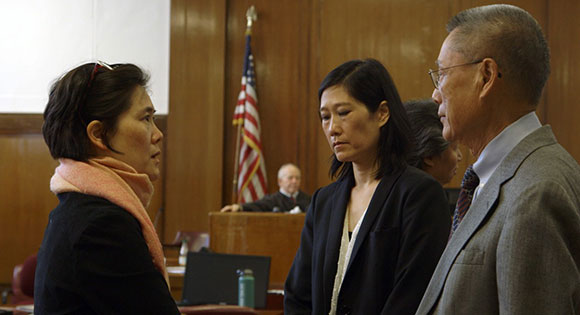 Abacus was treated differently. This family-run bank was located in New York's Chinatown where it catered to first generation Chinese immigrants and immigrant-run small businesses. Its founder, Shanghai-born Thomas Sung, had a hero: George Bailey, the savings-and-loan officer in the movie It's a Wonderful Life who sees it as his duty to serve his community and make it possible for the little people to have homes and be successful. Sung and his small but successful bank seems to be an odd target (given all the available ones in 2008) for Manhattan District Attorney Cyrus R. Vance, who put the full power of his office into investigating mortgage fraud by loan officers at Abacas. The major issue: some of the supporting documents on the loans were falsified, and the loans were sold to the Federal National Mortgage Association (Fannie Mae).

James does a masterful job showing how Sung and his three gifted daughters, who were executives at the bank, first tried to cooperate with investigators after discovering their employees' wrongdoing. But then the bank itself was charged. The family endured a five-year very stressful ordeal until they were finally cleared after months of trial. At one point, Thomas Sung's wife says, "Tom is not easily pushed around and, my girls, they are tough, smart, capable women."

Abacus: Small Enough to Jail has rightly been called a highly dramatic David versus Goliath tale. But it is much more than that. It is another exploration of the dysfunctional state of the American justice system with its inability to deal with rampant white collar crime and the many important ethical issues surrounding our financial institutions. It also reveals the breadth and depth of prosecutorial abuse. An egregious example of this is when Abacus employees are paraded in front of the media in handcuffs and chains.