Making a romantic comedy is one of the biggest challenges for filmmakers. Creating rounded, funny, and vulnerable lovers is the second really big test. And the third task is the most difficult of all —bringing us to tears as we witness moments of intimacy in a love relationship experiencing difficulties.

Kumail Nanjiani works part-time as an Uber driver in Chicago while pursuing a career as a stand-up comedian. He is onstage performing his latest material when Emily (Zoe Kazan), a grad student, yells out a loud "Woo-hoo!" That marks the start of their romantic relationship, although neither one of them is ready for such a commitment. 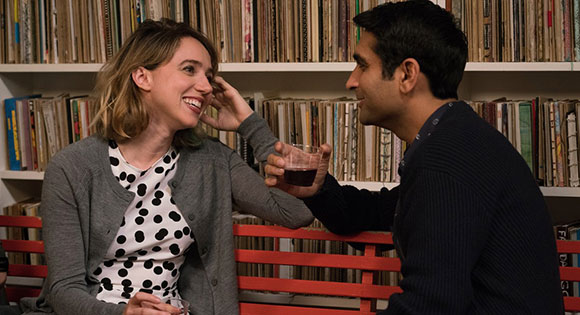 In romantic comedies, it is always the small stuff that opens the gate to fresh encounters.

Kumail's Pakistani parents (Anupam Kher and Zenobia Shroff) come from a culture where the tradition is for marriages to be arranged. Although Kumail has grown up in the United States, they want him to wed a Pakistani woman. His controlling mother invites eligible prospects to their weekly family dinner, but he shows no interest in following up with them. What his parents also don't know is that he is experiencing doubts about his Islamic faith and no longer does the ritual prayer. 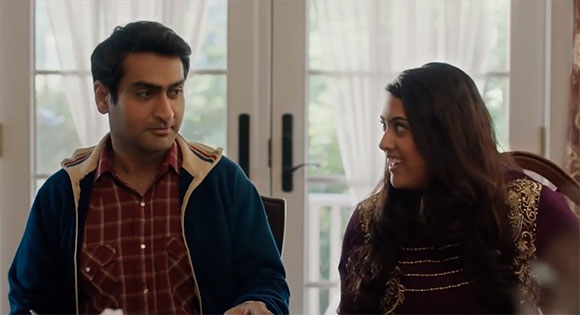 In many immigrant families, young men and women rebel against the traditional religious and cultural paths of their parents and seek to find their own ways.

Kumail and Emily fall in love, but he cannot bring himself to tell his family, knowing they will reject him for choosing a white woman. He decides to end the relationship. She is hurt and disappointed by his decision. Shortly after they separate, she is taken to the hospital with a mysterious ailment. Her roommates call Kumail to visit her, and he ends up giving permission for the doctors to put her in a medically induced coma while they try to diagnose and treat the infection. 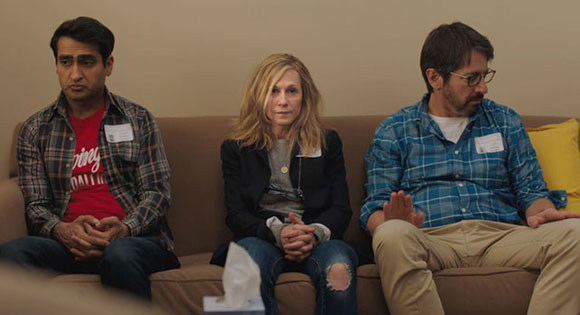 Emily's parents arrive in Chicago and he joins them at the hospital to offer his support. Beth (Holly Hunter) is a feisty wife whose marriage has gone sour after her husband Terry (Ray Romano) confessed a one night-stand at a conference. Although Kumail immediately bonds with Terry, it takes a lot of patience and persistence to win Beth's affection; she, like his own mother is a dominating woman set on taking charge of things. She's aware of the young couple's breakup and can't understand why he is sticking around.

Hospitals are increasingly associated with mysteries – unidentified diseases, infections that seem to come out of nowhere. What happens there – for good and for ill – cannot always be explained.

The Big Sick is directed by Michael Showalter (Hello, My Name Is Doris) based on a hilarious and touching screenplay by Kumail Nanjiani, Emily V. Gordon, and Showalter; Kumail and Emily are married, and the story is autobiographical. The skill set of producer Judd Apatow is manifest in the sweet, rich, and often messy performances by the large and talented cast. This dramedy mixes laughter and tears as Kumail and Emily struggle to work out their love for each other in the midst of familial clashes, religious pressures, health crises, traditional values, and the cultural criticism of young comedians.

This abundance qualifies The Big Sick to be one of the Most Spiritually Literate Films of 2017.