Directed by Emer Reynolds
Top-drawer documentary on the astonishing mission of the Voyager spacecrafts past the outer planets of our solar system and beyond.

The Farthest will premiere on U.S. public broadcasting (PBS) on August 23, 9 – 11 pm ET. Check local listings for the station and time in your area. The program may also be available for streaming from PBS.org and will be rebroadcast in September.

A Wonder-filled Journey
NASA's Voyager mission began 40 years ago. Voyager 1, the farthest human-made object, launched on Sept. 5, 1977, and Voyager 2, the second farthest, launched on Aug. 20, 1977. PBS's two-hour special tells the remarkable story of this mission, with observations from NASA scientists, pictures beamed back from space, and much more. You can't help but love these little space engines that could! 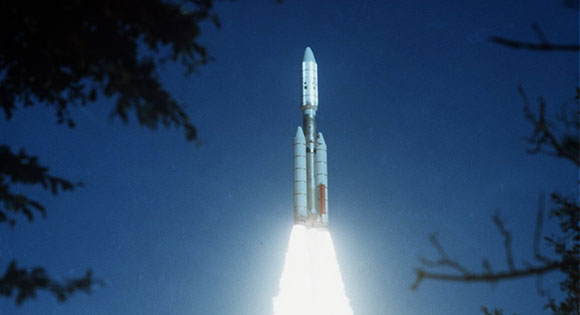 Voyager made so much noise on liftoff from Cape Canaveral that those watching felt their bodies shaking. Since then scientists and observers around the world have been shaking their heads in wonder at what we have seen and learned from them. The twin spacecraft made a grand tour past Jupiter, Saturn, Uranus, and Neptune. And then in 2012 Voyager I left our solar system to journey into interstellar space, to go on perhaps forever.

Modern Day Explorers
The scientists, engineers, and team members who envisioned the Voyager mission are representatives of humanity's yearning to know about the unknown. In the documentary, they recall their reactions to Voyager's pictures of what had never been seen before by human eyes. "Wow," "Ahhh," "Holy Moly," along with their wide-eyed expressions, convey their abundant enthusiasm. We find ourselves, to use Diane Ackerman's phrase, "kneedeep in the cosmic overwhelm." 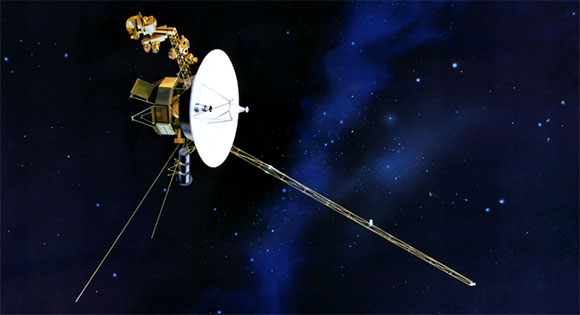 Just think about this: Since its launch in 1977, Voyager 1 has traveled 12 billion miles and counting. It is moving at more than 320 million miles per year. Yet it is equipped with less computing power than a modern mobile phone — which has 240,000 times more memory.

"Out yonder there is a huge world, which exists independent of us human beings and which stands before us like a great, eternal riddle, at least partially accessible to our inspection and thinking. The contemplation of this world beckons like a liberation."

Extending the Mission
Originally NASA's plans had the Voyager mission passing by Saturn and Jupiter. But the spacecraft took advantage of a once-in-a-176-year planetary alignment and slingshot trajectories to extend the mission to harvest the wonders of Uranus and Neptune.

"This is one of the boldest and most spectacular space missions of all time," says EP Sean B. Carroll of HHMI Tangled Bank Studios, "As we approach the 40th anniversary of the mission's launch, with both spacecraft still going strong and farther from Earth than any other object humans have created, we felt it was important to tell the story of how Voyager came to be and what important discoveries it made possible."

The two Voyagers explored all four of the giant outer planets of our solar system, 48 of their moons, and their unusual system of rings and magnetic fields. Among their findings:

The Voyager Golden Record
The Pulitzer Prize winning scientist Carl Sagan was chairman of the NASA Voyager Record Committee and executive producer of the gold-coated phonograph record which is affixed to each Voyager. This time capsule message from Earth to possible extraterrestrial civilizations contains 117 pictures explaining our planet and ourselves, greetings in 54 four different human languages and from the humpback whales, a representative selections of "the sounds of Earth," and almost 90 minutes of some of the world's greatest music. 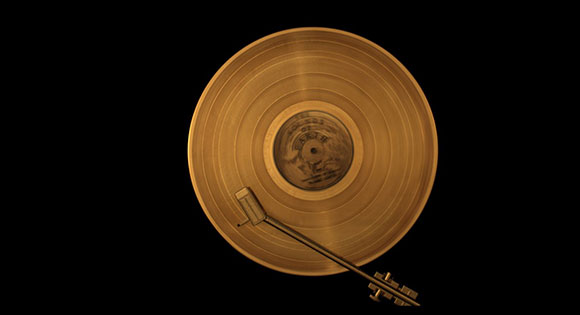 Carl Sagan said of this creative and welcoming project:

"No one sends such as message on such a journey without a positive passion for the future. For all the possible vagaries of the message, any recipient could be sure that we were a species endowed with hope and perseverance, at least a little intelligence, substantial generosity and a palpable zest to make contact with the universe."

Goodwill in a Vast and Awesome Universe

One of the messages sent into the universe was from U.S. President Jimmy Carter, dated June 16, 1977:

"We cast this message into the cosmos ... Of the 200 billion stars in the Milky Way galaxy, some – perhaps many — may have inhabited planets and space faring civilizations. If one such civilization intercepts Voyager and can understand these recorded contents, here is our message: This is a present from a small distant world, a token of our sounds, our science, our images, our music, our thoughts, and our feelings. We are attempting to survive our time so we may live into yours. We hope some day, having solved the problems we face, to join a community of galactic civilizations. This record represents our hope and our determination and our goodwill in a vast and awesome universe."

Don't miss this wonder-filled story of a mission created by science and founded on hope.