The Shape of Water

Directed by Guillermo del Toro
A sensuous film that is both a fairy tale and a socially relevant portrait of the prejudices afoot in our times.

The Shape of Water is a story that only a screenwriter and director with a well-developed and totally idiosyncratic imagination could create. Fortunately for us, that exactly describes Guillermo del Toro.

The time is 1962 when the Cold War is raging between the United States and Russia. Elisa Esposito (Sally Hawkins) is a lonely mute who works the night shift as a janitor at a top-secret research center in Baltimore. Her best friend and co-worker is Zelda (Octavia Spencer). The only other person in Elisa’s life is her neighbor Giles (Richard Jenkins), a closeted homosexual commercial artist whose career has been waylaid by the use of photography in advertising. 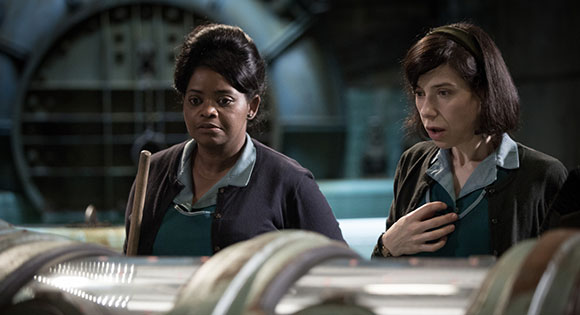 Colonel Richard Strickland (Michael Shannon) is head of security at the research facility. He has just returned from South America with an amphibious humanoid creature (Doug Jones) that they chain up in an algae-filled pool of water. His superior, General Hoyt (Nick Searcy), has plans to study this creature’s body and use that data to improve America’s prospects in space travel. Dr. Robert Hoffstetler (Michael Stuhlbarg), the scientist most involved with the project, has his own plans for Amphibian Man.

This is not an easy movie to categorize. It starts off as an intriguing story about a lonely woman who is attracted to an equally lonely creature. Then it veers into a Cold War conspiracy plot. And it is also a love story. 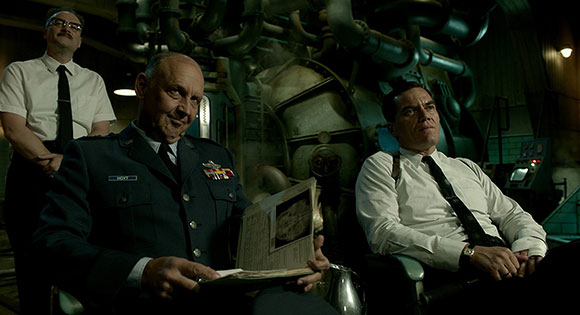 We’ve identified some moments and themes that spoke to us as we found ourselves immersed in the movie. We hope these notations will help you identify themes that resonate with concerns today. This is a very rich film, so we also hope our reflections will lead you to discover more on your own.

Be careful now, the monster may not be who you think it is, and sometimes there are more than one. Monsters set out to destroy whatever progress we make in living lives of compassion, empathy, and love. 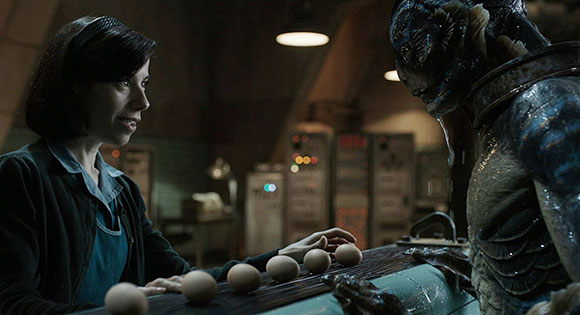 Connecting with the Asset

Elisa has a regular morning routine, which includes preparing boiled eggs. After she sees the “Asset” (the name the researchers have given the creature), she decides to share the eggs with him. It is the first way she connects with the Amphibian Man. She speaks to him in sign language and he catches on quickly. Next she tries playing music. Eventually, she offers him her body. How do you and others in our times connect with those who are different from us?

Back at her apartment, she and her next door neighbor Giles enjoy watching musicals on TV. In a clip from The Little Colonel, Shirley Temple dances on the stairs with Bojangles. Dancing and free movement are very appealing to Elisa. She can’t talk or sing, but she can dance. To the world, Elisa may be a victim – and at one point she is subjected to sexual harassment – but she has self-esteem. 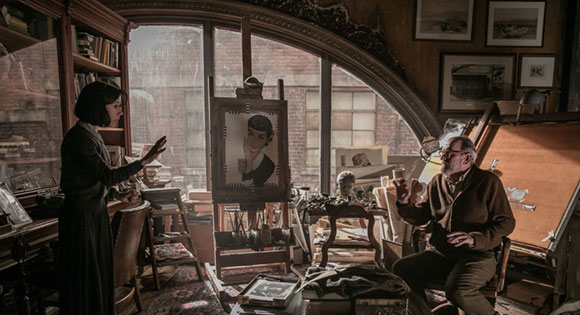 What Elisa sees at work is much uglier. Strickland uses a high-voltage electric shock cattle prod to torture Amphibian Man. You get the sense he’d use the baton on anybody or anything that he considers to be different and hence enemies. The Cold War is also raging in his heart. His character will remind you of voices you hear on the news every day.

The Image of God

Strickland doesn’t know what the creature is. Where he found him, the indigenous people revered him as a God. But the colonel will have none of that. A conversation with Zelda reveals his racism:

Strickland: “You may think that thing looks human — Stands on two legs, but we’re created in the Lord’s image and you don’t think that’s what the Lord looks like, do you?”

Zelda: “I wouldn’t know, Sir. What the Lord looks like.”

Thinking about the image of God is just one of the challenges that The Shape of Water puts before us. 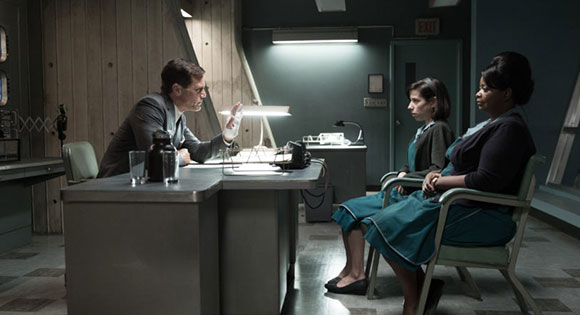 The Future Is Bright

At his home, Strickland puts on a positive front, even when he is injured by the creature. When his son tells him they are burying a time capsule at his school and he wonders about the future, the colonel replies: “The future is bright. You gotta trust in that. This is America.” With all that unfolds in this story, you may want to question that prediction.

The Essence of Love

Elisa tries to explain to Giles why she is so drawn to Amphibian Man and wants to help him. He translates her sign language:

“The way he looks at me. He doesn’t know what I lack… Or how I am incomplete. He just sees me for what I am. As I am. And he is happy to see me, every time, every day.”

Empathy is a bond. And that strong connection gives Elisa the courage to act in surprising ways as the story goes on. 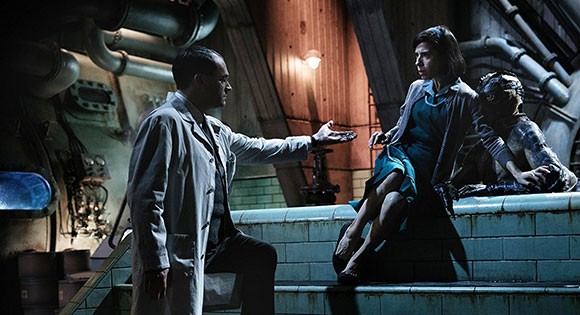 The scientist Hoffstetler meets with a Russian agent named Mihalkov. He argues for saving the creature. “I came to this country- to learn what I could… There is still so much we can learn.” But his contact has a different view: “We don’t need to learn. We need Americans not to learn. They don’t learn, we win.”

The Cold War may be over, but conflict still rages over the control of information. Promoting ignorance and distrust of the facts is a strategy in our national life and international relations.

The Shape of Water

Finally, there is the film’s title. In many spiritual traditions, water is a metaphor for the omnipresence of the divine. In Mathnawi II: 1020-1, Rumi seems to be describing Elisa’s choice:

“Know that the outward form passes away
But the world of reality remains forever.
How long will you play at loving the shape of the jug?
Leave the jug; go, seek the water!”