Directed by Joe Wright
A sturdy biopicture about Winston Churchill's triumphs and struggles as England's Prime Minister in 1940.

"Success is not final; failure is not fatal: it is the courage to continue that counts."

May 8 through June 4, 1940, are critical and fateful days for the survival of England during World War II, and the hero of those days was Winston Churchill. In this sobering biopicture, Gary Oldman plays him as a cantankerous boss to his secretary Elizabeth Layton (Lily James), a strong leader who admits his weaknesses and fears to his loving wife Celementine (Kristin Scott Thomas), a vociferous critic of Neville Chamberlain (Ronald Pickup) and Lord Halifax (Stephen Dillane) who want to negotiate a peace plan with Adolf Hitler, and a savvy negotiator who realizes things are going his way when King George VI (Ben Mendelsohn) decides to go along with side with him at a critical moment. 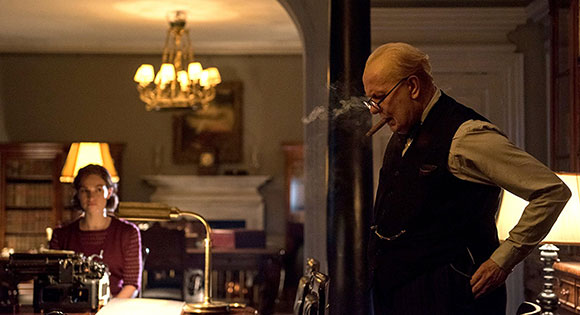 Director Joe Wright accentuates the power and importance of this tense political leader's addresses in the House of Commons after his election as Prime Minister. His rousing "We shall fight them on the beaches" speech brings politicians from both the Labour and Conservative parties together behind his determination to continue the battle against Hitler, even when it looks like defeat is imminent. As one member of Parliament explains, "He just mobilized the English language — and sent it into battle."

Screenplay writer Anthony McCarten shows us a great man saddled with burdens such as the disappointing response of U.S. President Roosevelt to his request for military aid, the widespread view that he botched his leadership of the disastrous World War I military campaign at Gallipoli, and his yearning to come up with a plan to solidify his place in history. 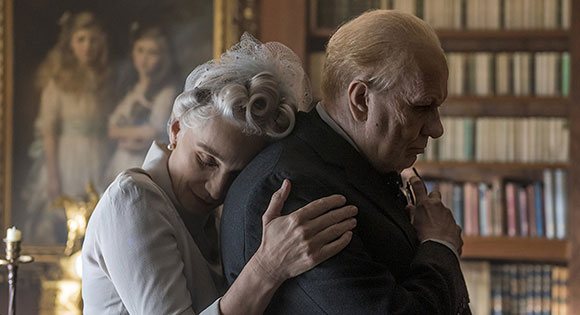 In a surprising populist scene, Churchill humbly takes a ride on the London Underground to listen to the people. He learns of the ordinary man and woman's vibrant patriotism and national unity. It is this experience that gives him the courage to go on — emboldened by the English people's support of his crusade.