A Wrinkle in Time

Directed by Ava DuVernay
A science fiction fantasy about a girl's quest to discover her own power by embracing her faults and expressing her love.

Reviewers often face a dilemma when covering a film based upon a book they love. Should they go into the movie without expectations and let the filmmakers tell the story in their own way? Or should they compare and contrast the film to the book, examining whether the characters seem properly developed, all the necessary elements of the story are included, and the themes and lessons are faithfully conveyed?

That was our challenge when seeing A Wrinkle in Time, the movie based upon Madeleine L'Engle's Newbery Medal-winning science fantasy novel, which was first published in 1962. We have long appreciated this story as a Christian parable about how light can overcome darkness and love can be transformative. These lessons come through an exciting and very imaginative story in which a teenage girl, her little brother, and a school friend crisscross the universe with the help of three celestial beings in search of her missing scientist father. All the incidents in the book lead to a moment when the heroine realizes that she is a conduit of God's love and thereby can free her little brother from the clutches of an evil force.

Director Ava DuVernay's version of A Wrinkle in Time, with a screenplay by Jennifer Lee and Jeff Stockwell, keeps the characters and many of the key events in the storyline, but chooses to emphasize a different message. If you are looking for Christian theology, read the book. If you are open to a movie focused on a girl's empowerment, then this one is for you. Putting aside our regret that L'Engle's focus has been minimized, we are now going to just review the movie.

Meg Murry (Storm Reid) is having a hard time at school. She is bullied by the popular girls and reprimanded by the principal (Andre Holland) for not being the excellent student she once was. Her problems stems from two things. Her father (Chris Pine), a scientist who had been working on interstellar travel, disappeared four years ago, and she misses him terribly. She has very low self-esteem, which puzzles her mother (Gugu Mbatha-Raw), also a scientist. The only person who seems to understand Meg is her little brother Charles Wallace (Deric McCabe), who is an outsider himself due to his high IQ. 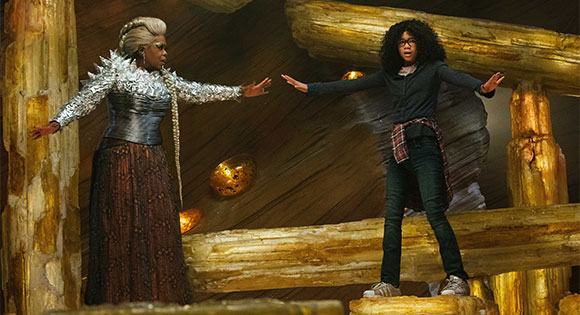 Charles Wallace has met three other-worldly beings who have heard a cry from a distant planet and followed it to the Murry's house; they believe it is from Mr. Murry who is in great danger. Mrs. Whatsit (Reese Witherspoon) is an enthusiastic, though a bit critical, guide chosen for this mission because of her communication skills. Mrs. Who (Mindy Kaling) spouts wisdom through quotes from literary figures like Rumi ("The wound is the place where the light enters you"), Shakespeare, and Hamilton creator Lin-Manuel Miranda. Mrs. Which (Oprah Winfrey) is a larger-than-life (sometimes literally) fount of knowledge who explains to the children what they are up against. A dark force is moving through the universe, instilling and feeding upon people's fears. They must become warriors to go up against "It" in order to find and rescue their father. In doing so, they will bring hope back. 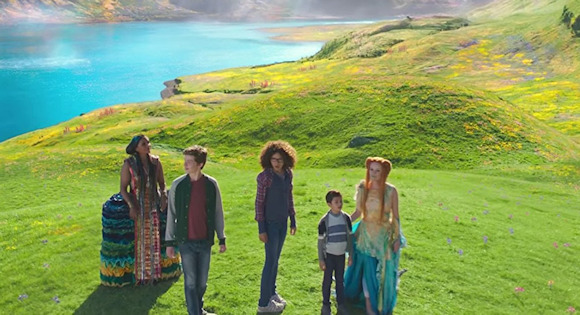 Soon Meg, Charles Wallace, and their school friend Calvin (Levi Miller) are transported to a distant planet by "tessering," taking advantage of a wrinkle in the space/time continuum. On Uriel they enjoy the company of some flowers who speak in color and report having seen Mr. Murry. The special effects during this part of the film are stunningly beautiful, especially when Mrs. Whatsit transforms into a large leaf-shaped being and takes them on an exhilarating ride across the planet and into the sky.

After a particularly painful tesser, the three children land on Camazotz, where the three Mrs. declare they cannot stay to help them. The planet is totally controlled by the dark. In one neighborhood, the children all bounce balls in rhythm, appearing to be little more than robots. At a beach party, Charles Wallace comes under the influence of a red-eyed man (Michael Pena). Before she quite knows what is happening, Meg discovers that her brother is beyond her reach, and although she does find her father, he can be of no help. It will be up to her to get Charles Wallace back from the influence of the "It." 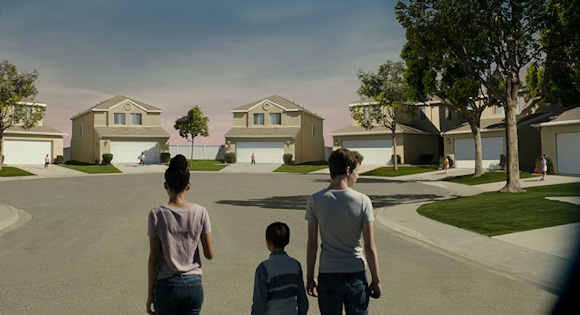 Throughout this adventure, Meg needs constant reminders that she can do what she is being asked to do. She has to take risks, trust others, face her fear, and draw upon the strength she gets from, of all things, her faults. And when she does, she is truly empowered to change her world and even the universe!

The key question in both the book and this film version of A Wrinkle in Time is: What is worth believing in? The two versions come up with different answers. The film's response is best conveyed in the theme song "I Believe" by DJ Khaled and Demi Lovato.

This is the "You go, girl!" message of the film. It feels very timely in this day and age.