Directed by Ol Parker
Prequel and sequel to the musical and movie propelled by the jubilant music of Abba.

Abba was one of the most successful pop bands of the 1970s, and although they disbanded in 1982, they remain popular. The well-tooled harmonies of this Swedish quartet recall the Mamas and Papas; their bouncy tunes remind us of early Beatles ballads. Abba's special magic is a blend of these ingredients and their own musical versatility.

If you are moved by the spunk and sass of their songs, skip to the closest theater and let the music in Mamma Mia! Here We Go Again stir your mind, body, and soul. 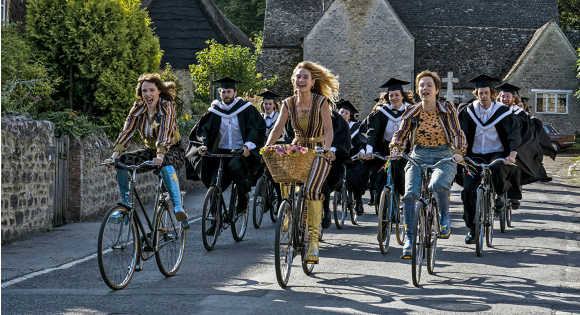 Part of this movie takes place after the events in Mamma Mia!, the 2008 screen version of the Broadway musical. But the best parts are a prequel that fills in the background of the characters. In the opening number, Donna (Lily James) is graduating from Oxford University. Instead of giving the valedictorian speech, she breaks into song and soon the entire class follows suit, dancing down the street. We are immediately caught up in the flow of the story.

Donna tells her two best friends, Rosie (Alexa Davies) and Tanya (Jessica Keenan Wynn), that she wants an adventure and has decided to go to Greece. Before long the beauty and buoyancy of this frisky young woman has attracted three suitors – Harry (Hugh Skinner), Bill (Josh Dylan), and Sam (Jeremy Irvine). After they have all left the island, she discovers she is pregnant; she names the baby Sophie. 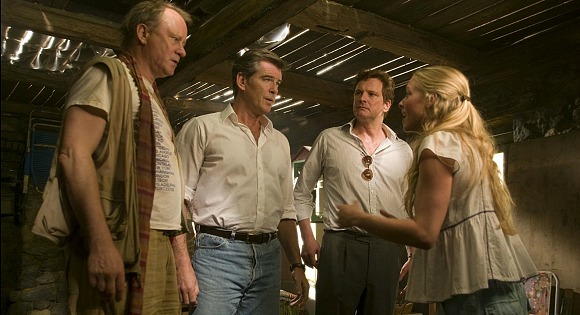 Switch times, and Donna has died. Sophie (Amanda Seyfried) is preparing for the grand re-opening of her mother's hotel. She is encouraged in this endeavor by Sam (Pierce Brosnan), Donna's husband, and her husband Sky (Dominic Cooper). But she feels something is missing. She wants to know which of Donna's suitors is her birth father, so she invites Harry (Colin Firth) and Bill (Stellan Skarsgard) to join Sam at the opening; she's sure she will know which one is her dad when she sees them. It's not so easy.

Rosie (Julie Walters) and Ranya (Christine Baranski) also show up. Soon the whole community joins them in Bollywood-style large song-and-dance numbers. Some of our favorites from the soundtrack are "I Have a Dream," "Andante, Andante," "Angel Eyes," and "Fernando" -- sung by surprise party guest Cher as Sophie's grandmother to Sophie's hotel manager (Andy Garcia). 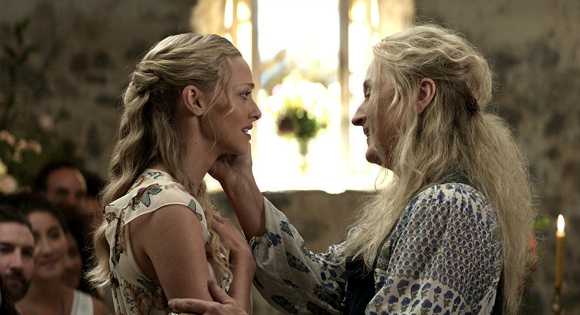 At the heart of this appealing music is the mother-daughter relationship between Donna and Sophie. Fortunately, Meryl Streep as the adult Donna shows up in spirit to support her daughter. Especially touching is the moment when the two sing "My Love, My Life."