Directed by Alexandria Bombach
The inspiring spiritual odyssey of a young Yazidi woman who has brought hope to her people.

"There is a light this world. A healing spirit more powerful than any darkness we may encounter. We sometimes lose sight of this force when there is suffering, and too much pain. Then suddenly, the spirit will emerge through the lives of ordinary people who hear a call and answer in ordinary ways."
— Richard Attenborough

"On Her Shoulders" is one of the Most Spiritually Literate Films of 2018. (Find screenings here.) It provides an emotionally engaging portrait of a Yazidi woman from Iraq who has taken upon herself the daunting task of bearing witness to the genocide perpetrated by the Islamic State (ISIS). She is speaking today for more than her own people. She has become an activist for women victims of rape and the millions of women all over the world who have suffered sexual harassment and abuse. 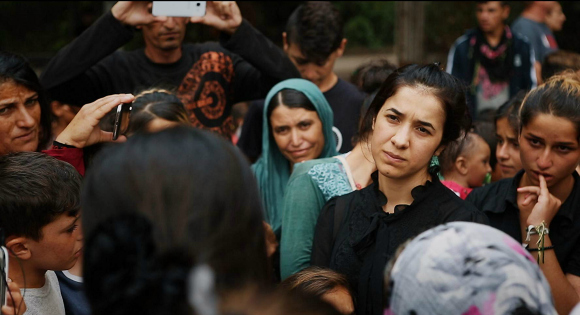 "Always do what you are afraid to do."
— Ralph Waldo Emerson

Nadia Murad was born and raised in Kojo, a small village in Iraq. Calling herself, a "simple woman with simple dreams and hopes," she says as a teenager she planned to open a salon to help women see themselves as special. But in 2014, the Islamic State attacked the town with the intention of ethnic cleansing; they were determined to exterminate the Yazidis, an ethnic minority whose monotheistic religion, Yazidism, ISIS regards as esoteric and non-Islamic.

The invaders killed Murad's mother and six brothers along with 700 people in the village of 2000; only 15 men were left alive. Throughout Iraq, an estimated 5,000 people were killed in the following weeks, and more than 7,000 women and children were captured.

Murad and other younger women were abducted and forced into sexual slavery. She was raped, tortured, and exchanged among the militants. When she was able to escape, she was only 21 years old. Grieving the murders of her family and community members, traumatized by her own terrible violations, she nevertheless made a life-changing decision not to cave into fear but to begin a campaign to honor those who died and those who left Kojo to become homeless refuges. She continually asks, "What must be done so a woman is not a victim of war?” 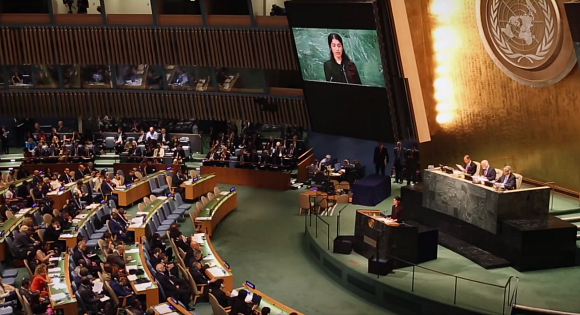 In the opening scene of On Her Shoulders, Murad is seen receiving the admiration of a pressing crowd of men and women who are immensely appreciative of her telling her own and their stories and advocating for justice for the Yazidis. In speeches before the United Nations Security Council, the United States House of Representatives, and the House of Commons, her courage seems to be gathering momentum. Murad's vision is affirmed by Secretary General Ban Ki-moon of the United Nations and by the articulate and charismatic Amal Clooney, a British human rights lawyer.

As vividly portrayed in On Her Shoulders, Nadia Murad has heard a compelling call to share survivor stories and advocate for justice for her people. But her advocacy takes a toll on this remarkable young woman. At times, she admits she would not mind living just a normal life. Fortunately, she has the supporter of her translator and friend, Murad Ismael. He accompanies her to speaking events and gatherings with Yazidi refugees. 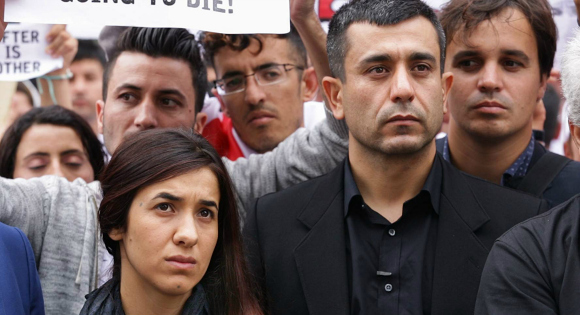 Interviewers keep trying to make her into a celebrity, but she insists that it is not her story alone they should be concerned about but what is happening to the thousands of women and girls still held by ISIS and other terrorists. An estimated 5,000 Yazidi people were kidnapped by the Islamic State in 2014 and about 3,000 remain in captivity. Murad insists they must not be forgotten.

In 2016, Murad was named the first United Nations Goodwill Ambassador for the Dignity of Survivors of Human Trafficking. The same year she was awarded the Vaclav Havel Human Rights Prize. In 2018, she and Congolese Dr. Denis Mukwege were jointly awarded the Nobel Peace Prize for "their efforts to end the use of sexual violence as a weapon of war and armed conflict.” She shared the award "with Yazidis, Iraqis, Kurds, other persecuted minorities, and all the countless victims of sexual violence around the world." 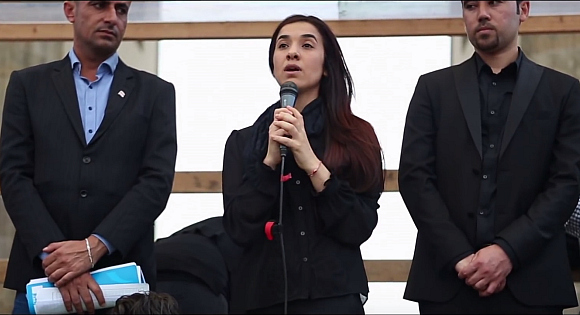 Watching Nadia Murad’s spiritual journey as she bears witness to the killings, violence, and abuses of ISIS, we recognize her very special calling to bring light to those in darkness — those entombed in suffering, depression, and feelings of helplessness. She would probably be the first to humbly say that she is just a young woman speaking the truth. But, oh, what her presence means to the world.

We are reminded of this story by Kent Nerburn in Make Me an Instrument of Your Peace:

"We are not saints, we are not heroes. Our lives are lived in the quiet corners of the ordinary. We build tiny hearth fires, sometimes barely strong enough to give off warmth. But to the person lost in the darkness, our tiny flame may be the road to safety, the path to salvation

"It is not given us to know who is lost in the darkness that surrounds us or even if our light is seen. We can only know that against even the smallest of lights, darkness cannot stand.

"A sailor lost at sea can be guided home by a single candle. A person lost in a wood can be led to safety by a flickering flame. It is not an issue of quality or intensity or purity. It is simply an issue of the presence of light."

Interview with the Director