The Man Who Killed Don Quixote

Directed by Terry Gilliam
A picaresque and quixotic tale about a filmmaker transformed into a dreamer.

There is a point late in this film when a commercials filmmaker named Toby is advised by his client to "try to keep up with the plot." Toby replies, "There's a plot?" We laughed, because we were wondering the same thing.

But there is a story here amidst all the scenes of seeming madness, dreamlike sequences, Holy Week processions to fake castles, and elaborately costumed characters at a ball. It's a tale that the director, Terry Gilliam, has been trying to bring to the screen for 30 years. This is his tenth attempt; one of the earlier efforts was documented in the very entertaining documentary Lost in La Mancha. 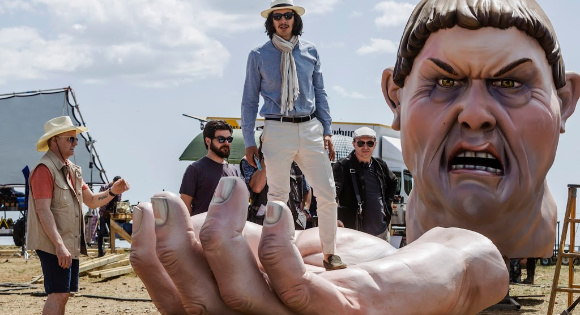 What happens to people when they make a film and take its themes and promises very seriously? Toby (Adam Driver) is about to find out. Years ago, he made a student film in a Spanish village, casting a local shoemaker as Don Quixote (Jonathan Pryce) and the daughter of the tavern-keeper (Hovik Keuchkerian) as Angelica (Joana Ribeiro), the innocent object of the old man's devotion.

Now ten years later, Toby has become a jaded, self-centered director of commercials when he isn't responding to the sexual advances of his boss's (Stellan Skarsgård) wife (Olga Kurylenko). Shooting on location, he realizes he's very close to the village of his earlier film. He decides to go visit and see how everybody is doing.

He is stunned to discover that his little film has had a tremendous effect on its actors. Angelica went off to the city convinced she could become a famous actress, only to end up as a call-girl. And his Quixote has become convinced that he truly is the "Knight of the Mournful Countenance." He mistakes Toby for his loyal squire Sancho and insists they go on an adventure together. 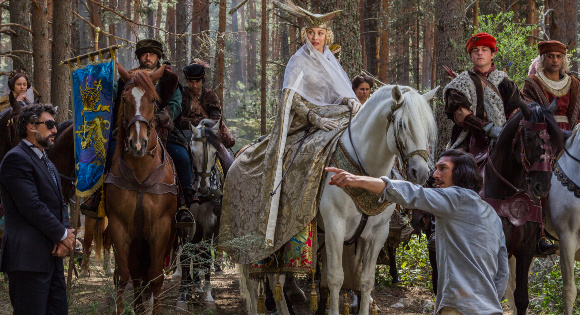 From this point on, the film gets increasingly bizarre and fanciful. Flashbacks show the hopes and dreams of the villagers from Toby's original film, which are contrasted with the cynicism and commercialism of his current employers. There's a big fight with demons in a ruined castle (which could be a dream), and an elaborate costume party during which Don Quixote is blindfolded and told he is journeying to the moon. Toby tries to rescue Angelica from an abusive relationship with a tyrannical Russian businessman, and then to get Don Quixote to realize who he really is. 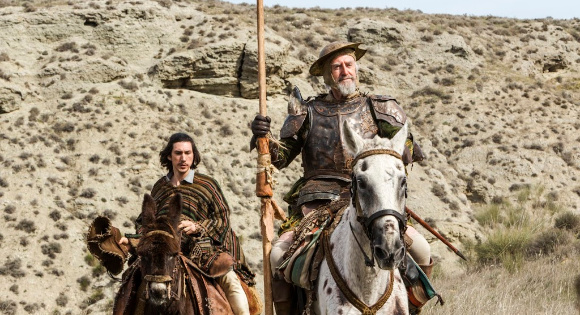 "I think the problem with Quixote is that once you get hooked on that character, and what he stands for, you become Quixote. You march into the madness, determined to make the world the way you imagine it is. But, of course, it isn't."
-- Director Terry Gilliam

The classic story of Don Quixote, created in the novel by Miguel de Cervantes, is one of an idealistic dreamer who is convinced that he is a knight-errant and that through chivalrous acts he can save the world – or at least his beloved. Even when challenged to accept what others claim is "reality," he perseveres on the side of the right and the good against all obstacles. Gillian's film covers these same themes through the eyes of both the old man and the young filmmaker. Jonathan Pryce is convincingly mad and committed as Don Quixote. And Adam Driver conveys how transformation often occurs just by being in a special person's presence.