Directed by Gabriela Cowperthwaite
A deeply spiritual drama about the beauties and bounties of friendship.

"There is nothing on this earth more to be prized than true friendship."
— Thomas Aquinas

America is suffering from an epidemic of loneliness. Cigna, a health care provider, conducted a large-scale survey and the findings reveal that nearly half of Americans report sometimes or always feeling alone, 27% say they rarely or never feel as though there are people who really understand them, and 20% say they rarely or never feel close to people or have anyone to talk with. The combined bane of loneliness and lack of friends diminishes lives and causes much heartbreak.

Our Friend is a warm, wise, and emotionally rich drama covering the close relationship between three adults as they struggle to keep alive the bonds of friendship they have forged over the years. They model what it takes to banish loneliness and have meaningful connections through good and bad times.

Gabriela Cowperthwaite directs the film, which is based on a true Esquire magazine article written by Matthew Teague and adapted for the screen by Brad Ingelsby. In order to catch the unpredictable and improvisatory nature of lives, the screenwriter jumps and skips back and forward over a 13 year-period. Our commentary follows a traditional narrative line. 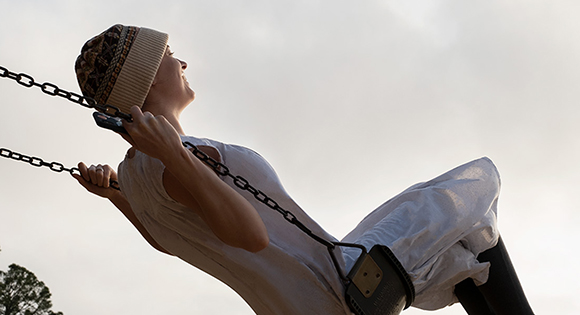 Dane (Jason Segel in a smashing performance) is a quiet, laid-back, individualist who, unlike his peers, refuses to be animated by ambition or the need for financial success and fame. While working at a New Orleans theatre, he meets an actress, Nicole (Dakota Johnson), and asks her out on a date. She is married, however, so they become friends.

Later Dane meets her husband Matt (Casey Affleck), a journalist who has big dreams of becoming a globe-hopping correspondent. The two men couldn't be more different, but they become good friends too. Matt and Nicole have two daughters (Isabella Kai and Violet McGraw), and Dane relates well to them since he has a playful and humorous side.

"When we honestly ask ourselves which person in our lives mean the most to us, we often find that it is those who, instead of giving advice, solutions, or cures, have chosen rather to share our pain and touch our wounds with a warm and tender hand. The friend who can be silent with us in a moment of despair or confusion, who can stay with us in an hour of grief and bereavement, who can tolerate not knowing, not curing and face with us the reality of our powerlessness, that is a friend who cares."
-— Henri J. M. Nouwen

When Nicole begins a hard-fought battle with cancer, Dane offers to move in with them and help out in any way that he can. This ethical choice means leaving his job and his girlfriend for an indefinite stay. He and Matt juggle caregiving responsibilities, both for Nicole and the two children.

"I have learned that friendship isn't about who you've known the longest, it's about who came and never left your side."
— Yolanda Hadid

Lest anyone think that The Friend is just another melodrama about dying and death, let us bring to the fore that this film is filled with many authentic moments. The characters share moments of pain, abandonment, confusion, and eventually sadness and grief. The two men cope as best they can, proving that their friendship is strong enough to endure what might cause others to crumble into a thousand pieces.

Our Friend does not slight the role of loneliness in Matt and Nicole's marriage and in Dane's life. It doesn't sugarcoat the difficulty of maintaining a friendship through incredibly hard times. We were relieved when Matt is finally able to release enough control to call in a hospice nurse (Cherry Jones) to guide them through Nicole's final days.

This kind of illness and death will not happen to all of us. This kind of caregiving will not be required by all of us. But the movie isn't titled "Nicole's Dying." It's called Our Friend because the need for friendship is universal.