Directed by Rebecca Sugar
A delightful and moving animated fable about change and community.

The Cartoon Network was invaded by aliens six years ago, and ever since, the Crystal Gems — exiles from their planet Homeworld and now living on Earth, along with a little half-human/half-alien boy named Steven — have been spreading a unique brand of bite-sized animated empathy explosions to an increasingly dedicated fanbase. With every episode, creator Rebecca Sugar’s Steven Universe has expanded its universe, growing from an adorable study of one boy and his wacky, out-of-this-world adopted aunts to a complex allegory complete with intersecting mythologies and indelible characterizations. There are even songs, and anyone who hasn’t heard the show’s soundtrack already should stop reading now and immediately look up some of these disarmingly sincere and deceptively simple showtunes. They get stuck in the head and heart in beautiful ways, just like everything about Steven Universe.

Now, after five seasons of mostly merely 11-minute episodes, Steven, the Crystal Gems, and their entire galaxy of friends are hitting the big time, an 82-minute full-fledged musical extravaganza, and characteristically, the result is stunning. The film basically takes all of the elements of the show’s shorter format, throws in longer, more intricate songs, and presents a storyline that feels simultaneously right in line with the show’s themes and far larger and expansive. 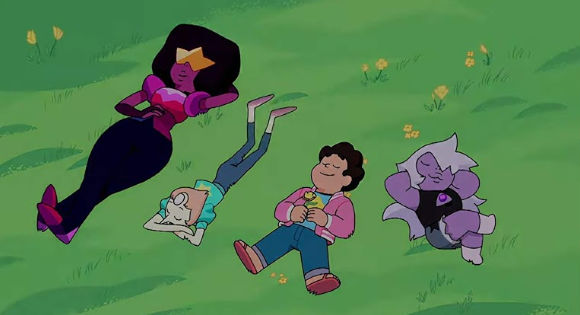 The fully-developed plot and characters of Steven Universe’s past five seasons are too complicated and deep to attempt any kind of outline here, but that’s no matter. This perfectly composed follow-up to the climactic events of the show’s last short-form episode lays just enough foundation to welcome newcomers to leap right in, while that foundation is also so briskly laid that diehard fans won’t mind the reminders of just how far these characters have come.

Basically, Steven (voiced by Zach Callison) and The Crystal Gems, Pearl (Deedee Magno), Garnet (Estelle), and Amethyst (Michaela Dietz), have fought a battle with Homeworld and are now enjoying a happily-ever-after existence. It’s been two years since they saved the world and themselves, bringing a sort of interplanetary peace, and it’s time to celebrate a bright future. But a new threat to this serene space emerges in the form of a nuisance from their past. They must band together to remember who they’ve been, reexamine who they are, and recreate who they think they want to be. 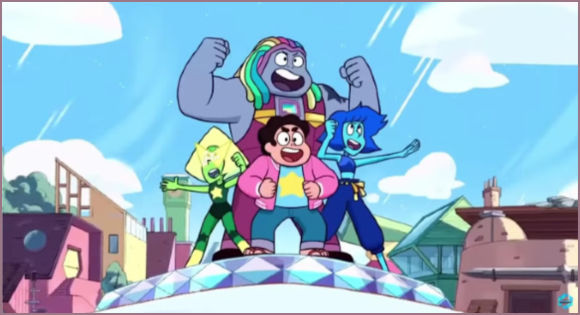 The proceedings that follow will feel familiar to anyone who has seen even just one episode of the series, but that’s a very good thing. The show is regularly pitch-perfect and the film perfectly follows suit. Sugar and her collaborators have skillfully honed an art of queering what animated television can be, filling every minute of Steven Universe with gender nonconformity, sweet surprises and disruptions of cultural norms, warmhearted callback character quirks and generous jokes, and most of all, an authentic commitment to continuously showing how a storyline focusing on empathy, love, compassion, and deep humanism can be just as entertaining as it is enlightening.

The visuals pop and sizzle with glittery goodness, but more than anything, Steven Universe, the show and film, is simply a sophisticated exploration of personal and communal growth. It froths with insights on the importance of tending relationships, and it lifts up the metanoic power of a community calling individuals not only to live into their own best selves, but, while they are doing so, to also seek the best in everyone else. Even if these themes sound too familiar and cliché to hold the attention of been-there-done-that-seen-it-all adults, all can rest assured that there has never been a film that has explored these issues quite like Steven Universe does.

In the end, the entirety of Steven Universe’s trajectory has focused most on growing up, both literally and spiritually, and never stopping. In this film, familiar characters are older and wiser, but even with more years and experience under their asteroid belts, these vibrant personalities are at their best when they are modeling a continuing commitment to self-reflection and self-growth. The Steven Universe team continues to find ways to keep the show’s subtle depths fun enough to hold the attention of youngsters, and witty enough to attract folks no longer considered animation’s target audience but still open to transformation. It also slyly continues to actively queer society’s assumptions and educate all audiences about the power of empathy. That is an astonishing feat. 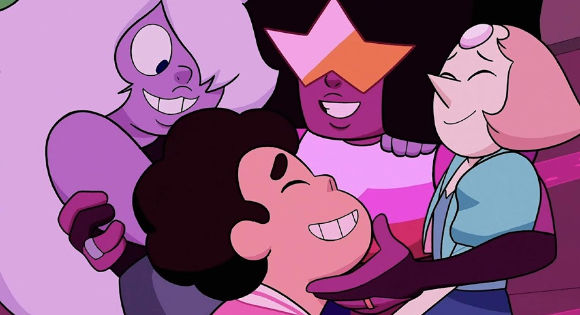 Steven Universe: The Movie is an openhearted invitation for all to join the eternal quest to be a better human being. The fact that this lesson is embodied by a bunch of animated aliens and one little human-alien hybrid should deter no viewer from accepting the invitation. This is mythology on par with the greatest epics of our canon; it’s just a bit more fresh than most of those musty stories. But take note: There’s a growing audience of kids and kids at heart who are treating Steven Universe’s adventures like sacred scripture, and the world might just be a more humane place if we all looked to its starry brightness for guidance.