Directed by Celine Sciamma
A sensitive and exhilarating period piece about forbidden love.

The island world of Céline Sciamma’s Portrait of a Lady on Fire contains no men in physical form, but the stench of patriarchy still wafts through its constantly windy environment. In the film’s loosely corseted 1760s French setting, women support and love one another, in ways subtle and dangerous, but the demands of a male-dominated society still threatens from the outside, and Sciamma paints a heartbreaking picture of fleeting freedom that still can’t fully combat the concretized masculine rules that govern and shackle even the fiercest of women. Nonetheless, the passion on display burns with a brilliant, soft rage that speaks to our current political moment (and women’s place within it) with a breathtaking specificity and sensitivity. 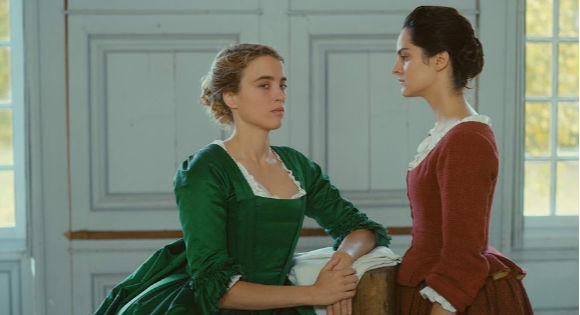 When artist Marianne (Noémie Merlant) arrives at the remote home of La Comtesse (Valeria Golino), she knows her assignment and the secret she must keep. La Comtesse has hired her to paint a portrait of her rebellious daughter Héloïse (Adèle Haenel), who has just returned from a convent and refuses to have her likeness recorded. But this is not just any portrait; La Comtesse has promised Héloïse to an unseen Milanese suitor, the likeness a requirement for him to make his final judgment, and it’s therefore an extremely important element of La Comtesse’s well-laid plans for herself and her daughter.

Over all of this hangs a pall of grief, as Héloïse’s sister has just met a grisly end, having fallen off a cliff, and the house’s young servant girl Sophie (Luana Bajrami) believes it to be a suicide. It’s expressly because of this untimely death that Héloïse has been called back from the convent, as it’s now her who must marry and create good connections for the shrinking family. Héloïse, a defiant spirit, is obviously nonplussed to now be burdened with such expectations, and her refusal to sit for the portrait endangers La Comtesse’s future. This push and pull between the strict, confining frames of society and the wily brushstrokes of those who would dare to paint outside those lines permeate the film’s every scene.

So sneakiness and clandestine creativity are Marianne’s orders. She is to snatch snapshots of Héloïse’s likeness as she spends time with her and paint these memories in private. Héloïse has been told that Marianne is a companion for walks and it is over the course of these blustery afternoons, that Marianne begins to feel something more for Héloïse, a curiosity that soon feels more like obsession. And when Héloïse begins to return Marianne’s glances and interest, the film takes a turn into romantic territory that might grate in the hands of a less deft filmmaker, but here ignites in ways that are never exploitative and almost always exhilarating. 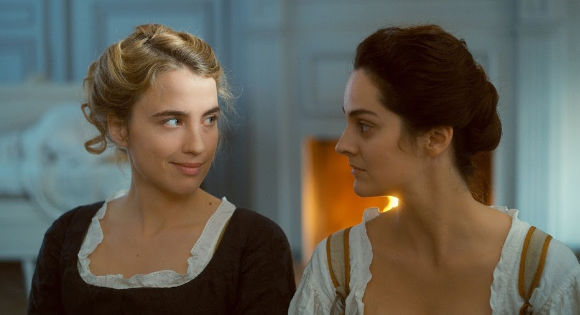 All of this develops beside an impatiently ticking clock. La Comtesse becomes more and more eager to have the portrait finished and shipped as Marianne and Héloïse become more and more eager to make their time together last. This tension is most gorgeously apparent in the journey of Marianne’s painting itself. While her early renderings of Héloïse capture a stern, uncooperative subject, the likeness transforms as the women transform, and the final version of Marianne’s creation is both heart-rending and heart-stopping, a portrait of a lady in love, beautifully bewitched, bothered, and bewildered.

While this budding romance between these two remains the centerpiece, Sciamma fills the margins with moments that are less explicitly romantic, but that round out rich stories for all four women. From a quietly affecting scene in which the ill-fated myth of Orpheus and Eurydice is read to a subplot in which Sophie discovers she is pregnant, Sciamma constructs flashes of connection that always speak to a larger context while also rooted in character, never contrived simply for sermonic purposes. The ways in which Marianne and Héloïse take care of Sophie in her time of need display a layer of feminine communal care that cannot help but make pointed commentary on the current state of women’s reproductive freedom, but it's also intensely true to who these women are. 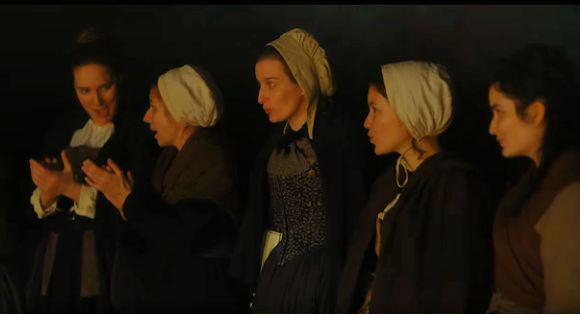 Along the way to helping Sophie on her decision, the trio also encounters a large group of a capella singing village women who are participating in some sort of feminist community ritual and singing the Latin lyrics, “fugere non possum,” which translate to “I cannot escape.” The simple phrase, sung in unison by a growing chorus of voices is a moving musical moment that underlines remarkable feminist connections without clearly definining whether these connections are as intimate as the one between Marianne and Héloïse. It’s in these various permutations of female companionship that Portrait of a Lady on Fire finds its most powerful spiritual sustenance, always steering away from the more exploitative nature of some lesbian films made for the male gaze and instead building bridges of intimacy that feel wholly authentic and even authentically holy. 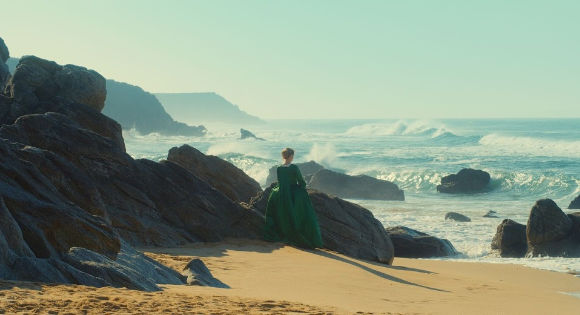 Of course, all of these loving connections blossom amidst the rocky ground of a society that does not have any patience for or interest in their continuing growth, and this outside reality inevitably breaks in, a phallic reminder of the harshness of patriarchy. But Sciamma is less interested in overt messages about the insidious ubiquitousness of masculinity than she is in creating an ode to the exquisite melancholy of love attained and never abandoned, even as time moves on and distance expands. As the Latin lyrics sung by those village women attest, none of the characters in Portrait of a Lady on Fire can escape from the boxes built around them, no matter how hard they struggle, but even inside these boxes, Marianne and Héloïse build a blaze from which they never want to escape. Their story is as timeless as the most enduring myths.