Directed by Kelly Reichardt
A gentle portrait of budding friendship in an alienating landscape.

Kelly Reichardt has patience, for her complex characters, for the slow unspooling of stories, for the surprisingly moving rhythms of normal life, and she subtly demands nothing less than thoughtful attention from her audience. In First Cow, Reichardt’s latest slow-burning foray into the historical landscape of the Pacific Northwest, this deliberate director has once again found ways to mine powerful meaning from the everyday, the small and quiet, the almost imperceptible. She’s a master at always showing and never telling, and First Cow, like every Reichardt creation, is less a film than it is a full immersion into its inhabitants’ humble dreams, a deep dive into suffocated desires that might go unnoticed if her generous eye weren’t taking the time to magnify them. 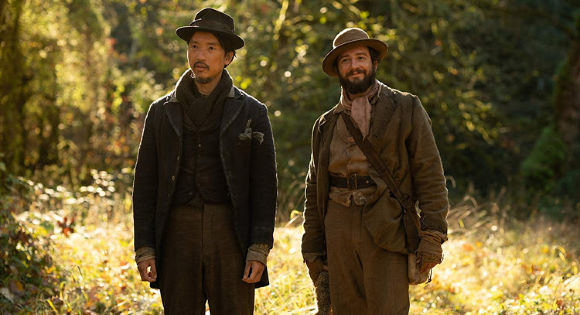 At the film’s start, a short epigraph appears on the screen, a quotation from poet William Blake: “The bird a nest, the spider a web, man friendship.” And First Cow is first and foremost a tale of how friendship acts as both a comforting nest and a tricky web for its main characters, Cookie (John Magaro) and King-Lu (Orion Lee). These 19th century migrants are searching for what it means to be American, discovering what it takes to survive in a harsh environment that has almost none of the comforts of home, but true to Reichardt’s usual style, they are also tentatively figuring out what it means to simply trust another human being in a world full of suspicion.

Cookie, whose real name is Otis Figowitz, has been traveling through the wilds of Oregon, serving as an underappreciated cook for a ragtag team of trappers who regularly take out their disappointed aggression on him. One night, while Cookie is searching for viable meal options, he happens upon a naked man hiding in the bushes. King-Lu claims to have left his native China long ago and to currently be outrunning a group of vengeance-fixated Russians. Cookie hides King-Lu until he can get him to safety, an act of selfless altruism that seems to come naturally to him, and the story jumps a bit forward in time. 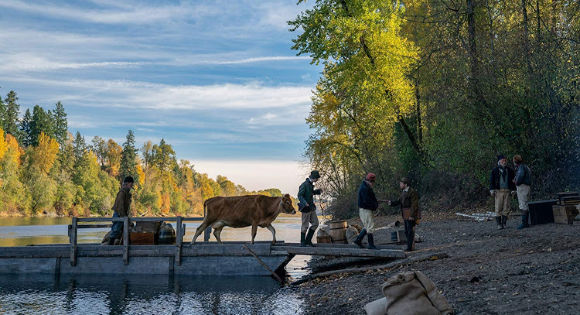 Soon after, Cookie and King-lu find one another again, this time inside a scrappy bar at the Royal West Pacific Trading Post. As they commiserate over their current sorry states, they witness the arrival of a dairy cow, the first to be brought to the Pacific Northwest. It doesn’t take long for them to work up a scheme to secretly milk the cow late at night and use the milk for Cookie to craft delicious little honey-covered delicacies, which they begin selling in the market as “oily cakes,” quickly capturing the taste buds and admiration of all of the settlement’s occupants.

But their success is somewhat short-lived, as the pair becomes acquainted with a wealthy English trader known as Chief Factor (Toby Jones), the actual owner of the cow. Chief Factor acts as a stand-in for the classic wealthy settler elitist, nice enough on the surface, but also open about his beliefs that severe punishment is the only way to maintain cooperation from those of lower social status. Deigning to visit the marketplace one day, Chief Factor takes a liking to the oily cakes, and he implores Cookie to bake a special English dessert, one that definitely needs milk. Soon after Cookie bakes it for him, the jig is up, the nightly clandestine trips to secure the secret ingredient discovered. And Cookie and King-Lu are on the run again, this time together. 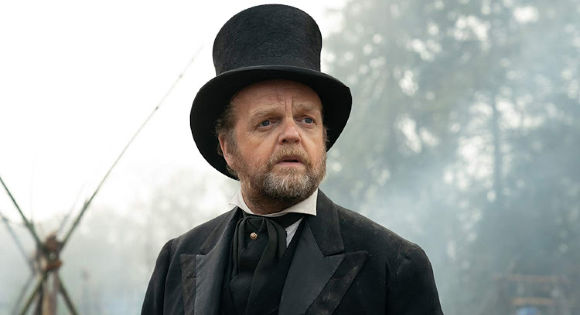 Based on Jon Raymond’s 2004 novel Half-Life, Reichardt’s film has a small tease of a modern-day scene at its start: A young woman (Alia Shawkat) and her dog dig up two human skeletons, lying side-by-side, before the story hurtles back in time. With this intriguing foundation, Cookie and King-Lu’s escape from Chief Factor’s henchmen takes on a level of suspense that slightly raises the pulse of the film, as the audience is left to wonder how these two friends end up lying together and, ostensibly, dying together.

Reichardt is less interested in the suspense than she is in unhurriedly showing us just how close two outsiders can become when they attempt to achieve the American dream and find that it was never meant for them in the first place. Cookie and King-Lu might be small-time thieves, but they’re merely trying to manifest the entrepreneurial spirit that the West demands. They might be cheating the game, but it’s a game they quickly realize has been rigged against them from the start. The only spiritual antidote to the alienation of such a system is honest connection, small kindnesses, and quiet revolution, and in the nurturing nest and sticky web of their friendship, Cookie and King-Lu embody the simple power of moving carefully together when you fear you’re alone and going nowhere.