Directed by Barry Levinson
An involving story about baseball as myth and growing ground for heroes.

“Whoever wants to know about the heart and mind of America had better learn baseball.”
-- Jacques Barzun

The Natural is a mythic and mesmerizing movie about America’s national pastime and the heroism of a lonely individualist. The value-laden story tells of pride, love, suffering, initiation, and resurrection. It is based on Pulitizer Prize-winning Bernard Malamud’s first novel (1952) and has been adapted for the screen by Roger Towne and Phil Dusenberry.

As Roy Hobbs, the farm boy whose dream is to become the best baseball player ever in the major leagues, Robert Redford gives one of his finest screen portraits. A unique blend of firm inner resolve, vulnerability, and individuality emanates from him like a visible aura. The movie’s magic moments of charm, comedy, and drama are delivered by a prestigious cast that includes Robert Duvall, Glenn Close, Kim Basinger, Wilford Brimley, Barbara Hershey, Robert Prosky, and Richard Farnsworth.

Barry Levinson directs The Natural by keeping his eye on the ball; he evidences an appreciation for the story’s fairy-tale elements and the idiosyncrasies of its characters. The combined talents of cinematographer Caleb Deschanel and composer Randy Newman give the movie ample richness of sight and sound.

“Tell me what you desire and I will tell you what you are.”
-- Henri Frederic Amiel In what is almost an American ritual, the playing of baseball is passed from father to son. And so it is in 1918 on the Hobbs farm where young Roy’s father (Alan Fudge) teaches him the essentials of the game. Aware of the boy’s talent, he warns him, “Rely too much on your own gift and you’ll fail.” The night of his father’s death, lightning strikes a giant oak on the farm, splitting it in two. Young Roy (Paul Sullivan, Jr.) fashions a baseball bat out of a piece of the wood and dubs it “Wonderboy.”

Later, twenty-year-old Roy Hobbs (Robert Redford) tells his sweetheart Iris (Glenn Close) that he is going to Chicago to try out for the Chicago Cubs. They make love, and he promises to send for her once he makes the team. On the train to the Windy City, Roy meets Whammer Wambold (Joe Don Baker), a baseball star; Max Mercy (Robert Duvall), a sports writer; and Harriet Bird (Barbara Hershey), a bewitching temptress. He impresses them all during a train stop by striking out “The Whammer” before a crowd at a local fair. In Chicago, Harriet invites Roy to her hotel room and shoots him with a silver bullet.

“None of us can help the things life has done to us. They’re done before you realize it, and once they’re done, they make you do other things until at last everything comes between you and what you’d like to be, and you have lost your true self forever.”
-- Eugene O'Neill 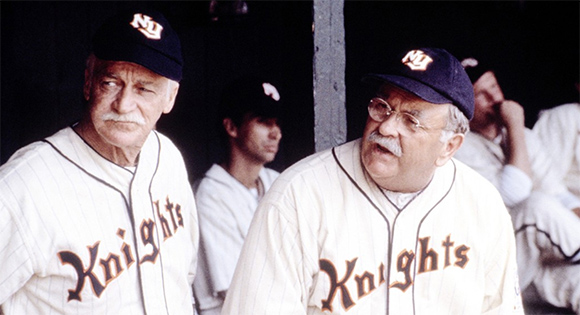 After 16 years in limbo, Roy Hobbs is signed to play for the ailing New York Knights. The manager, Pop (Wilford Brimley), keeps the middle-aged rookie on the bench. When the newcomer is at last given a chance at bat, he hits a home run with such force that he knocks the ball’s cover off. Believing that Hobbs brings good luck, the Knights adopt the lightning symbol carved on his Wonderboy bat as the insignia for their uniforms. Following the untimely death of right fielder Bump Bailey, Roy takes over the position and leads the squad to victory after victory with his powerful hitting ability.

“Of all sports, baseball, with its graceful intermittencies of action, its immense and tranquil field sparsely settled with poised men in white, its dispassionate mathematics, seems to me best suited to accommodate, and be ornamented by, a loner. It is essentially a lonely game.”
-- John Updike 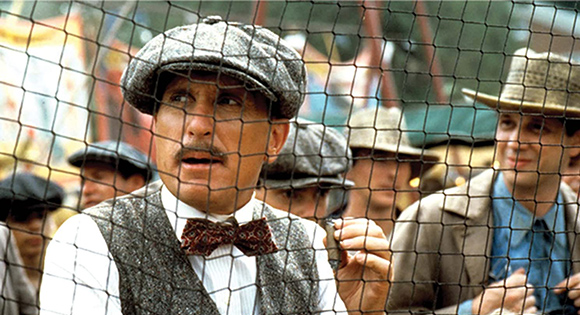 As Roy Hobbs enters the crazy zone of fame, Max Mercy can’t get over the feeling that he knows him from the past. While he tracks down the details, the slugger is seduced by Pop’s niece, Memo Paris (Kim Basinger), a blond bombshell with a lust for money. Roy’s affair with her puts him into a slump until Iris shows up at a game in Chicago and inspires him to hit a homer – this time shattering the field clock. The two renew their relationship, and Roy admits, “My life didn’t turn out the way I expected.” To the fans, however, Roy is a hero who has given the Knights a shot at the pennant.

Returning to New York, Roy collapse at a pre-playoff game celebration. The doctor at the hospital removes a piece of a silver bullet from the inner lining of his stomach and advises him not to play ball anymore. Max, who’s discovered the secret of Roy’s past, threatens to make or break him by withholding or printing the story of his having been shot as a young man. The Judge (Robert Prosky), who plans to take over the Knights if they lose, gives Roy $20,000 in cash not to play in the next game. And Memo lets him know the price he must pay if he wants to marry her. But it is what Iris tells him at his bedside that most affects him. She says: “I think we have two lives – the one we learn with and the one we live.” 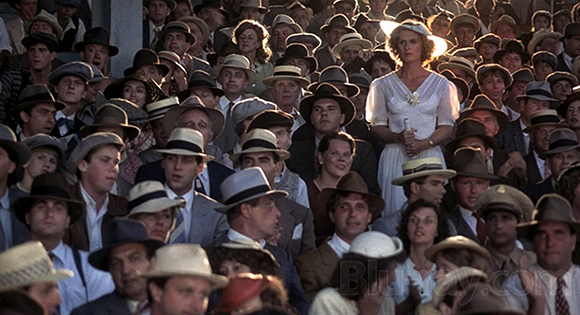 “Initiation lies at the core of any genuine human life. . . . Any genuine human life implies profound death and resurrection. . . . Whatever degree of fulfillment it may have brought him, at a certain moment every man feels he has betrayed the best that was in him. In such moments of total crisis, only one hope seems to offer any issue – the hope of beginning life over again. This means, in short, that the man undergoing such a crisis dreams of new, regenerated life, fully realized and significant.”
-- Mircea Eliade

Roy, buoyed by a note from Iris, steps to the plate, aware that the whole season on After his Wonderboy is broken on a foul ball, the adoring bat boy gives Roy one he has personally made. With a final swing, the slugger -- bleeding from his stomach --hits a homer that blows out the stadium lights.

“Not a victory is gained, not a deed of faithfulness or courage done except upon a maybe. And it is only by risking our persons from one hour to another that we live at all.”
-- William James

“Every man is haunted until his humanity awakens is what Blake said. And it would be hard to disagree with him because one of the best ways to nourish yourself is to nourish others, and many people have walked across that bridge and found themselves home at last.”