Directed by Nicole Newnham, Jim LeBrecht
An uplifting story of disability rights advocates and their ongoing fight for justice.

As the United States celebrates the 30th anniversary of the passing of the ADA (Americans with Disabilities Act), the fight for disability justice continues. Now, to fuel the continuing fires of activism, Crip Camp, an energetic and empowering documentary co-directed by Nicole Newnham and Jim LeBrecht, offers a fascinating and intimate glimpse into the loving community that birthed such necessary legislation as the ADA, presenting a playbook for ongoing organizing. Telling the little-known story of the near-utopian camp where many of these activists first found the connection that grew into a world-changing revolution, Crip Camp is essential viewing. 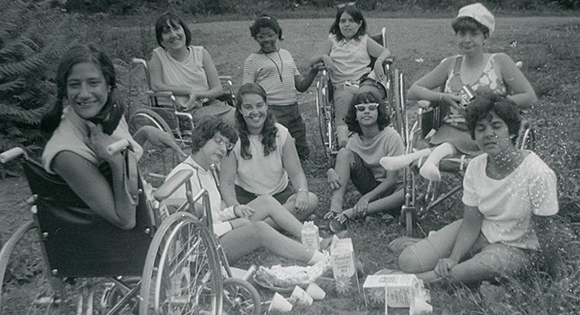 LeBrecht’s own story bookends the film, first delving into his childhood diagnosis of spina bifida and his discovery of Camp Jened. The teenaged LeBrecht leapt at the chance to experience this “summer camp run by hippies” in the Catskill mountains, especially after hearing that it was a place where he might even get to “smoke dope with the counselors.” Thankfully, a collective called the People’s Video Theater was filming at the time, so Crip Camp is filled with lively footage of 1970s-era Camp Jened, a haven where disabled folks of all stripes, accustomed to feeling at least different from their peers, if not completely ostracized from society, could be together, share stories, and feel embraced and understood in ways the outer world just couldn’t provide.

Through interviews with a colorful handful of campers both then and now, Crip Camp deftly moves from showcasing surprisingly intimate and even hilarious goings on at the camp (including a moment when quarantine became essential due to an outbreak of crabs among the frisky bunch) to the radical justice movement that sprang up among their number. Along the way, the film connects three major dots, showing the brewing independence and coalition between friends at Camp Jened, then the 1971 founding of the Center for Independent Living, and finally the 1973 sit-in that resulted in the signing of Section 504, the United States legislation that guarantees a public education to children with disabilities. 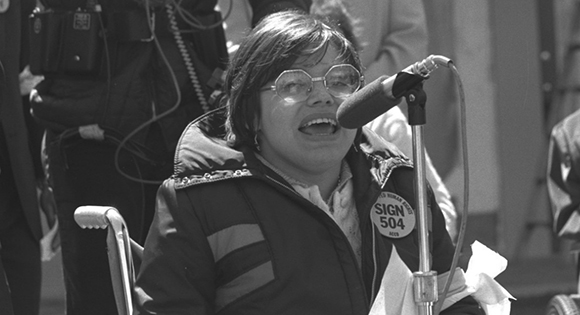 Taking center stage as these beats unfold is Judy Heumann, confined to a wheelchair since a childhood bout with polio and determined to see her fellow burgeoning activists’ demands met. She is a quiet force, leading through no-nonsense warmth and inclusion, and her transformation from camper to leader is breathtaking to behold. Other important voices include married couple Denise Sherer Jacobson and Neil Jacobson, both living with cerebral palsy and providing comic relief and profound insight through their uncommonly intimate interviews, and Corbett O’Toole and Dennis Billups, both of whom recall how intersectional the movement was; the 1973 sit-in was supported by diverse allies, including gay rights activists and the Black Panthers. Other campers offer moments of deep meaning and moving revelation in ways that keep Crip Camp surprising, even when viewers might think they know exactly where its main plot is heading.

The urgency of the disability rights movement has often taken a back seat to other fights for justice, and Crip Camp is an important reminder of just how dismissive and exclusionary society has been and remains, even decades after the signing of Section 504 and the ADA. As Sherer Jacobson observes, “You can pass a law, but until you change society’s attitudes, the law won’t mean much.” The fight for full inclusion and respect continues, and though Crip Camp stops just short of enumerating the concrete ways that viewers might participate in the ongoing work, the film is a perfect launchpad to ignite further exploration. It brims over with the propulsive passion of a people whose communal cry was first birthed on the grounds of a beloved camp, a place that dared to convince them that they had the collective power to push the outside world toward rousingly prophetic and completely achievable horizons.

R - some language including sexual references