Bruce Springsteen's Letter to You

Directed by Thom Zimny
A rousing and rockin' documentary in which Bruce Springsteen and the E Street Band record a new album and the Boss offers spiritual commentary on the songs.

After Bruce Springsteen wrote an album's worth of new songs, he gathered the members of the E Street Band into his New Jersey studio to record them. The result is the first album with the band since 2014, and it is a welcome addition to their catalog. To show us why it is so special, Springsteen invited cameras and director Thom Zimny to film their rehearsals and recording. Zimny previously filmed Springsteen on Broadway and a documentary about the themes of his solo record, Western Skies.

The camaraderie of the band is immediately apparent. Their serious attention to the music is also evident. And their talent -- well, to these viewers, there really is nothing like Springsteen on guitar, harmonica, and vocals; Max Weinberg on drums and vocals; Gary Tallent on bass and vocals; Stevie Van Zandt on guitar and vocals; Nils Lofgren on guitars and vocals; Roy Bittan on piano and vocals; Charlie Giordana on organ and vocals; Patti Scialfia on vocals; and Jake Clemons on saxophone. The sound is propulsive when it needs to be, meditative at times, always passionate. As Springsteen reminds us, most members of this band have been playing together for 45 years, and it shows. 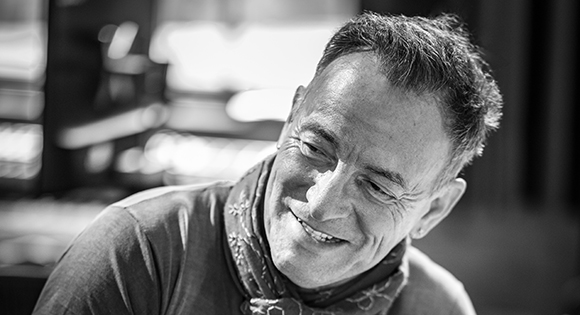 The documentary opens with Springsteen's admission that he has always had a deep need to have a conversation with his audience. The title song captures elements of that:

"I took all the sunshine and rain
all my happiness and all my pain
the dark evening stars and the morning sky so blue
And I send it in my letter to you."

The conversation continues as Springsteen explores living in the moment, dealing with grief, the immanence of death, and the joys of musical solidarity.

Springsteen is 71 now, and his band is getting up there in age too. So not surprisingly, when they aren't playing music, they do a good bit of reminiscing and storytelling. Springsteen describes finding some songs that he wrote in the early 70s -- "Song for Orphans" and "If I Were a Priest" -- and how he was advised that perhaps he was using too many words!

His life review also includes acknowledging those who are missing.
"Last Man Standing" was prompted by the death of a member of the band Springsteen played with from 1965 - 1968, the Castiles. Another song is dedicated to Danny Federici, a member of the band who died of lymphoma. And the presence of Jake Clemons reminds us all of his uncle, the "Big Man" Clarence Clemons.

We attended a concert during Leonard Cohen's last tour and noticed how often and with grace he introduced and thanked the musicians playing with him. Springsteen does the same throughout this film. He commends the E Streeters for being able to "float like a butterfly and sting like a bee." He refers to them as an efficient car. After playing together for so many years, they have developed a shorthand for creating music together, and as a result, they recorded the 12 tracks on Letter to You in only 4 days. During their celebration at the end of the session, Springsteen expresses his gratitude for what they've done and especially for who they are together. 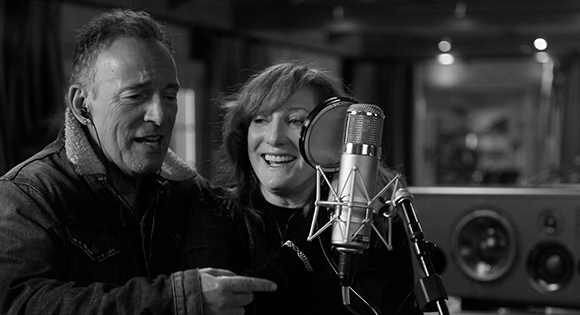 We've long written that Springsteen is spiritually literate, able to see signs of Spirit in the everyday world around him. So we were pleased to read his description of his songwriting in an interview with David Brooks in The Atlantic:

"I reference my Catholic upbringing very regularly in my songs. I have a lot of biblical imagery, and at the end of the day, if somebody asked me what kind of a songwriter I was, I wouldn’t say I was a political songwriter. I would probably say a spiritual songwriter. I really believe that if you look at my body of work, that is the subject that I’m addressing. I’ve addressed social issues. I’ve addressed real-life issues here on Earth. I always say my verses are the blues and my choruses are the gospel. And I lean a little heavier on the gospel than the blues. So I would categorize myself as ultimately a spiritual songwriter."

Introducing "The Power of Prayer," Springsteen notes that "we all have our own ways of praying. I restricted mine to 3 minutes and a 45 rpm record." The song is a tribute to the transformative power of pop music, and the stories the band tells throughout the film affirm this truth.

Springsteen's spiritual focus is most evident in his songs about loss and death. In "Ghosts" he acknowledges loss but proclaims "I'm alive" but "I need you by my side." "I'll See You in My Dreams," one of the most melodic and moving on the whole album, concludes that "death is not the end."

Springsteen ended his Broadway show with a reverential reading of "The Lord's Prayer" and a blessing for his audience. This album is filled with other blessings as he offers redemptive commentary on his rock 'n' roll songs. Springsteen sees giving people meaningful songs as his vocation. You can sense that he wishes for everyone what he feels:

"How you conduct yourself and do your work matters -- how you treat your friends, your family, your lover. On good days, a blessing falls over you. It wraps itself around you, and you're free and deeply in and of this world. That's your reward. Being here. That's what gets you up the next morning: a new chance to receive that benediction. While you are buttering your toast, getting dressed, or driving home from work, you stumble into those moments when you can feel the hand of God gently rest upon your shoulder. And you realize how lucky you are, lucky to be alive, lucky to be breathing in this world of beauty, horror, and hope. Because this is what there is -- a chance, a world where it's lucky to love, lucky to be loved, so you go until it fills you, until the sweat, blood, and hard tears make sense. You go until the light from the distant fading stars fall at your feet. Go and may God bless you."