Directed by Thom Zimny
A breathtaking personal tribute by the songwriter/storyteller to the spirituality of place, relationships, and service.

If one thing is clear from Bruce Springsteen's Broadway show, it's that he has lived a spiritually literate life. He incarnates the understanding that life is a sacred adventure, and as we wrote in our book, "Every day we encounter signs that point to the active presence of Spirit in the world around us. Spiritual literacy is the ability to read the signs written in the texts of our own experience."

Bruce, as his fans (including us) call him, may not describe his life that way, but he gives us plenty of signs in his solo show as he tells stories and sings the songs that express his soul. After 236 sold-out performances at Broadway's intimate Walter Kerr Theatre, that remarkable two-and-one-half hours — long for Broadway, shorter than a Springsteen concert — has been filmed for Netflix. 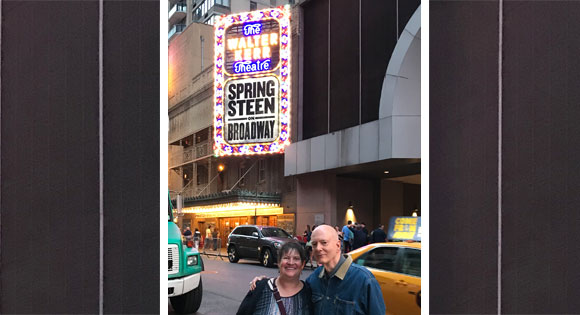 We saw Springsteen on Broadway on August 31, 2018. After nine months of being on the verified buyers list, we received a text with a "purchase code" allowing us to buy tickets. The first available date was Frederic's birthday. We happily flew across country from Claremont, California. It was definitely worth the trip. So was watching it again in our home when it debuted on Netflix.

Bruce Springsteen is one of our spiritual teachers. Through his music, he's been a prophet and preacher of yearning, love, beauty, compassion, justice, faith, transformation, and other spiritual practices. By sharing his life stories in this show, he fills out the picture of his worldview, and we'd add, his spirituality. As he says at the opening of the show, he's there to "provide proof of life to that ever elusive, never completely believable, particularly in these days, us." That us is influenced by the three types of spirituality: the spirituality of place, the spirituality of relationships, and the spirituality of service.

The Spirituality of Place

Bruce's lyrics have always featured remarkable details. And, not surprisingly, so does his storytelling. Introducing "Growing Up" and "My Hometown," he describes his neighborhood of Irish Catholics in Freehold, New Jersey, where his house was just a stone's throw away from the Catholic church and school. "I literally grew up surrounded by God," he notes. 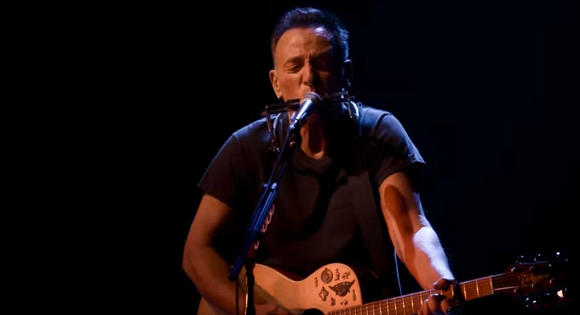 He and his many relatives in the neighborhood watched weddings and funerals and visited the local cemetery. That small town was "a place; you could hear it and smell it" and people made lives there. You can almost hear their footsteps (a sign of a spiritual place), and you may find yourselves (as we did) recalling your childhood neighborhood and details about it you thought you had forgotten. He describes a Copper Beech tree that he sat under with his friends and climbed to feel the wind; we knew trees like that.

Later in the show, he recites a passage from his autobiography, Born to Run, about driving across the United States. His patented attention to detail puts you right in the car thrilling to the beauty and the majesty of the American west. Between the lines, we hear that the place where we are standing — and driving — is holy.

The Spirituality of Relationships

Relationships form the spiritual web of our lives with family, marriage, and work colleagues being crucial strands. Bruce teases out the meanings in the "mystical world of men" — the bar where he was sometimes sent to fetch his father; his details this time capture a young boy's emotions, as does the accompanying melancholy song "My Father's House."

He switches gears when talking about his mother, describing how proud he was to walk on the street with her and her love of dancing. In "The Wish," he must be talking to her when he sings, "If you’re looking for a sad song, well I ain’t gonna play it.”

In another section, he pays tribute to rock 'n' rollers who inspired him when he was young, including two who later were killed in Vietnam. Some self-deprecating and funny stories about his early career are punctuated by two of his well-known songs, "Thunder Road" and "The Promised Land." Since Bruce, a guitar, and a piano are the only things on the stage, these songs are given a new intimacy. "Born on the 4th of July" becomes part-blues and part-dirge.

Of course, a key relationship in his life is with the E Street Band, and introducing "Tenth Avenue Freeze-Out," Bruce ruminates on what happens when a band forms and the whole becomes greater than the sum of their parts. He describes the members as a "communion of souls" on a quest in search of meaning, visited by visions; in a band "the world around you brings down the Spirit and you feel blessed to be alive." A band, in other words, illustrates the spiritual practices of questing, meaning, vision, and gratitude.

To further illustrate his point, Bruce offers a heartfelt description of how important the late Clarence Clemons, the saxophonist for the E Street Band, was to him. In "Tenth Avenue Freeze-Out," he remembers: "When the change was made uptown and the Big Man joined the band /
From the coastline to the city, all the little pretties raise their hands /
I'm gonna sit back right easy and laugh / When Scooter and the Big Man bust this city in half." 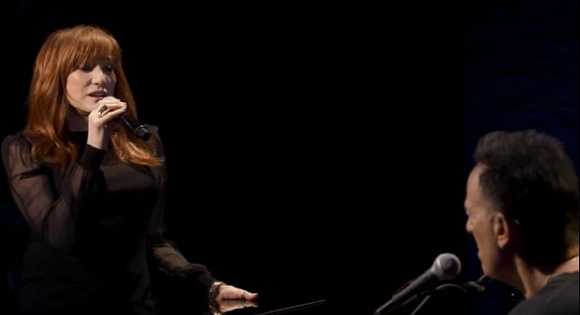 When Bruce is joined on stage by his wife Patti Scialfa, the focus shifts to love relationships. They have been singing together for years, so the duets on "Tougher Than the Rest" and "Brilliant Disguise" are masterful. But what struck us again is this duo's ability to convey through sound and gesture the challenges and the ambiguity in relationships. Trust, another spiritual quality, is essential, as is being in touch with who you really are. The second song ends with this poignant lyric: "God have mercy on the man / Who doubts what he's sure of."

Before "Long Time Comin' " Bruce reflects on what it means to be a parent, telling another story about his father. "We are ghosts or we are ancestors in our children's eyes," he concludes. "We either lay our mistakes and our burdens upon them and we haunt them, or we assist them in laying those old burdens down and we free them from the chain of our own flawed behavior and as ancestors we walk alongside them and we assist them in finding their own way and some transcendence."

The Spirituality of Service

Early in the show, we hear a brief sermon from "The Promised Land": "Blow away the dreams that tear you apart. Blow away the dreams that break your heart. Blow away the lies that leave you nothing but lost and broken-hearted. . . . I believe in a promised land." This kind of hope, determination in the face of despair and ugliness, resilience and resistance appears in many of Bruce's songs (our personal favorite being "Badlands"). The last part of Springsteen on Broadway gives us several angles on this spiritual theme. 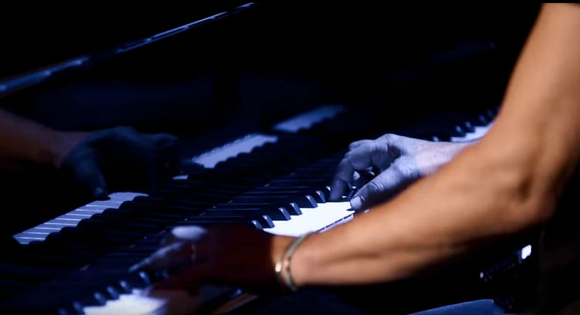 He recalls how the young people leading the March for Our Lives reminded us of the sacredness in America's democracy. And he contrasts their faith with those who speak to our "darkest angels" and want to divide the country. Quoting Dr. Martin Luther King's "The arc of the moral universe is long but it bends toward justice," he urges us to work for justice, to act with compassion, and to believe that what we are seeing is just another chapter in the "ongoing battle for the soul of America." How appropriate then that he calls up "The Ghost of Tom Joad" with the promise that sacrifices will not go unnoticed and support will ever be available.

Then from a dark stage, Bruce begins "The Rising," and the lights come up to evoke the shapes of the Twin Towers, a lasting tribute to the First Responders on 9/11. He continues by stating his lifelong intention — to know the American story, his story, and his audience's story. Where are we going as a people? And what does it mean to be an American?

If you are a Springsteen fan, you may have your own ideas on what song he will answer that question with, calling it his "long and noisy prayer." (Hint: there is some incredible guitar work on this one.)

If you are an American, you will appreciate the next choice too. When the Practicing Democracy Project put out a call for an "Alternative National Anthem," this was our suggestion: "The Land of Hope and Dreams."

Reflect on these lyrics as you consider what is happening in the country today, in our cities, in the countryside, and along our borders: 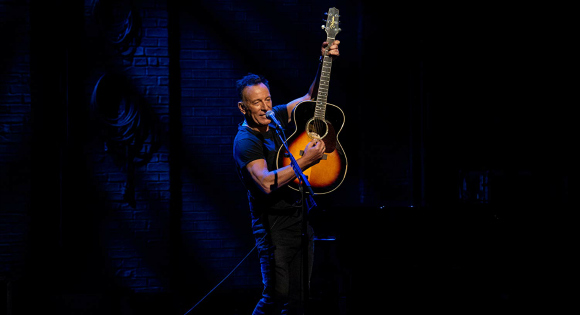 There's one more surprise in this show — that ties together the spirituality of place, relationship, and service. We hope we've convinced you to watch Springsteen on Broadway as part of your spiritual journey, so we will let you discover its final blessing for yourself.

At the end of our second of what we're sure will be many evenings with Bruce and his collection of stories and songs, looking at him standing alone at the center of the stage, we were reminded of the story of a man who stood before God, his heart breaking from the pain and injustice in the world.

"Dear God," the man cried out, "look at all the suffering, the anguish and distress in the world. Why don't you send help?"

God responded, "I did send help. I sent you."