Directed by Florian Zeller
A drama with a mix of sunshine and shadows about a man facing dementia and his daughter struggling to provide him the care he refuses.

Anthony (Anthony Hopkins) is a very ornery and opinionated 80-year-old who loves living alone in his comfortable book-lined flat. His older daughter Anne (Olivia Colman) has tried to provide her father with competent caregivers but he has driven them all away. She tells him that it has become imperative that he accept someone to look after him because she is moving to Paris with the man she has been living with, Paul (Rufus Sewell). He accuses her of abandoning him. 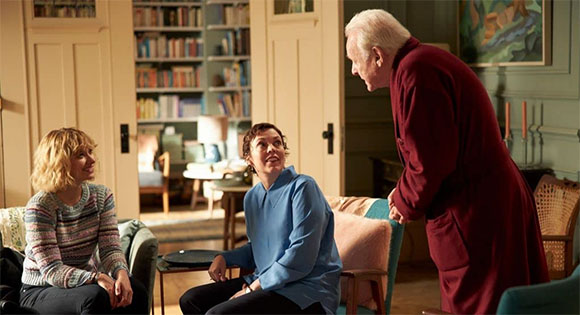 Although Anthony knows that his mental acuity is waning, he still feels that he can be in charge. He decides to please Anne when she brings in a new caregiver, Laura (Imogen Poots), who is both young and pretty. He flirts with her, pours them some whiskeys, and then claims that he was once a tap dancer.

All of this good behavior and his high spirits are because Laura reminds him of Lucy, his favorite daughter. Perhaps the cruelest comments in the drama are when Anthony compares Anne, whom he calls not bright or artistic, to Lucy. 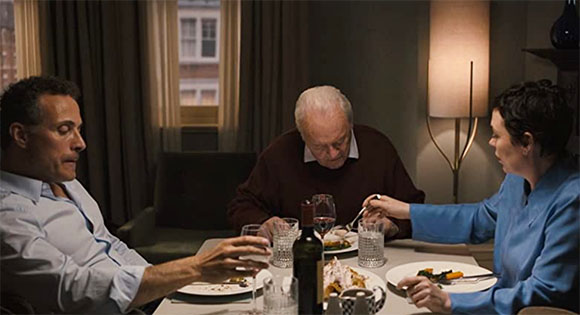 Tensions mount as Anthony becomes more confused. He keeps losing his watch. Who is the man in the living room of his flat (Mark Gatiss) who claims it is his home? Who is the woman bringing dinner as if she were Anne (Olivia Williams)? As the film goes on, we are not sure whose eyes we are seeing through, giving us our own taste of the impact of dementia. As the tension mounts between father and elder daughter, there is a breathtaking scene of spiritual breakdown.

The Father is am emotionally explosive drama written by the director Florian Zeller. It has been called a tragi-comedy and that mix of emotions comes across in the paradoxical lead characters who are both selfless and selfish, loving and egocentric.

Anthony Hopkins and Olivia Coleman each give Academy-Award caliber performances but what really makes The Father shine is its admirable blend of sunshine and shadows.