Directed by Sara Colangelo
A substantial film about the 9/11 Victim Compensation Fund that addresses whether it is possible to put a price tag on a life.

Following the horrific and confusing aftermath of the Sept. 11 attacks, the U.S. Congress decided to set up a fund to provide financial compensation for the 7,000 victims and the family members of those who died in the worst peacetime disaster in American history. The motive was largely financial; the lawmakers were worried that the airlines involved would be sued with the effect of tanking the economy. Those signing up with the fund had to agree not to sue.

Worth is based on the true story of Kenneth J. Feinberg (Michael Keaton), a skilled Washington lawyer and a specialist in dispute mediation. Saddened by the loss of so many lives and challenged by his own high standards of justice and fairness, he volunteers to be the head of the hastily set up September 11th Victim Compensation Fund. Much to the surprise of many, he takes the job of administering the fund pro bono. In a phone call, President George W. Bush tells him he wouldn't wish this job on his worst enemy. 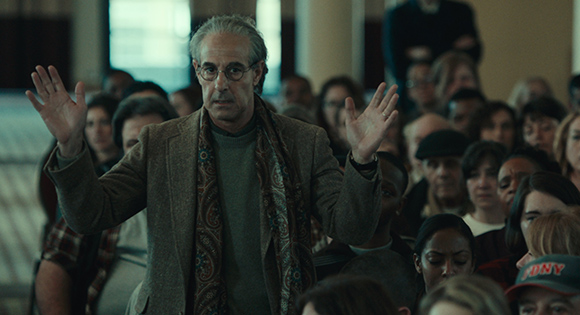 In his first town hall meeting with the victims and the families, Feinberg learns that they are angry with the formula being proposed to calculate compensation. Since it is based on salaries, it reproduces the income inequality of the society at large. Yet can the fund administrators really insist that one life is worth more than another?

The Congress gives the fund administrators two years to sign up 80% of the victims or the whole enterprise will be subject to review and could be shut down. Feinberg tries to justify his rational perspective but finds it leaking holes along the way. What about same-sex partners from states that do not recognize civil unions? What if someone really needs the money now for an emergency? 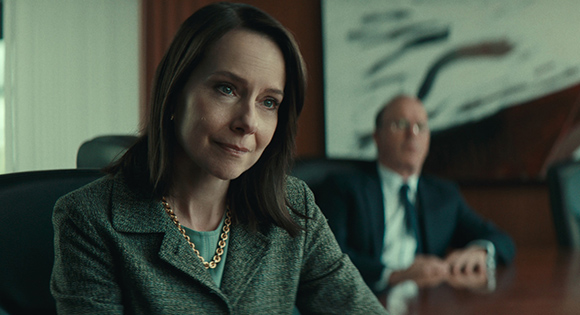 The fund's staff, including Camille Biros (Amy Ryan), the business manager of his firm, and an eager associate Priya (Shunori Ramanathan), are heartbroken as they listen to stories about those who died and witness the emotional distress of the survivors.

Hearing about those overwhelmed by grief, Feinberg tells his wife (Talia Balsam), "I don't know what to say," and she responds, "Sometimes there isn't anything." But the one person who seems to be most critical of the fund master's rationalism and refusal to set aside his formulas is Charles Wolf (Stanley Tucci); his wife died on 9/11 and he has set up a website, "FixtheFund.org," to point out flaws in how the fund is being handled. Another critic is Lee Quinn (Tate Donovan), who is determined to get more money for his rich clients.

Sara Colangelo directs this singular and substantial film with such emotional authenticity that viewers will find themselves in tears again and again. The tour de force performances by Michael Keaton and Stanley Tucci are sobering.

Worth is the kind of film that refuses to sugarcoat the spiritual complexities and ethical conundrums at the core of any assessment of blame and due compensation. The screenplay by Max Borenstein makes the most of the pivotal question, "Can you put a price tag on life?" The questions raised by the September 11 fund have been raised again after other tragedies, proving that there are no easy answers. In this film, Feinberg's soul-searching models how someone can reframe rationalism and learn how to emphasize the spiritual practices of listening, empathy, and compassion.

The Capacity to Really Listen

" 'Perhaps the most important skill that should be taught to all persons,' says Wilson Van Dusen, 'is the capacity to really see, hear, and understand others. Such a skill is useful in dealing with everyone -- friends, relatives, strangers.' The capacity to really listen, to put aside our own concerns for the moment, to feel or imagine ourselves in the world of another person and then to communicate our empathetic understanding to that person in such a way that he or she feels heard and understood is the foundation for all genuine relationship and solidarity between human beings."
-- John Neafsey in A Sacred Voice Is Calling

Empathy as a Transformer

"Empathy is an ideal that has the power to transform our own lives and to bring about fundamental social change. Empathy can create a revolution of human relationships."
-- Roman Krznaric in Empathy

"Empathy is risky business . . . because when we extend ourselves to a person who is in pain we're allowing their condition to remind us of our own, remind us that what we are bearing is the human condition."
-- Eric Kobell in What Jesus Meant

The Cost of Compassion

"Compassion has a price. It does not come without a cost, the least of which is the pain that pierces our own hearts as we accompany one who is suffering. . . . Compassion urges us to move out of our comfortable niches of security. Compassion stretches us and asks us to let go of apathy and indifference. Compassion refuses to accept excuses of busyness, ignorance, or helplessness. Compassion invites us to reach out to those who suffer, 'to live,' as Sharon Salzberg notes, 'with sympathy for all living beings without exception.' "
--Joyce Rupp in The Cup of Our Life

Practices and Resources for the Anniversary of 9/11