Directed by David Lowery
An epic reimagining of a poetic classic.

The Green Knight’s title is a bit misleading, as that titular templar is not the story’s hero but an antagonist who gets far less screen time than the actual, not-quite-yet-knighted main character, Gawain (Dev Patel). Of course, anyone who has read “Sir Gawain and the Green Knight,” the epic chivalric romance that serves as the film’s foundation, will already know this, but the fact that the menacing adversary takes over the title of David Lowery’s hallucinatory adaptation is significant. In this deconstruction of the classic hero’s quest, Gawain might be the character the audience is meant to follow and root for, but even when the Green Knight is out of sight, his troubling presence looms large over the film’s episodic structure and inside Gawain’s haunted mind, nudging audiences to question their own allegiances and dig deeper for the subversive seeds buried throughout.

While Lowery keeps many of the basics of the 14th-century source material intact, his decision to reposition Gawain in his pre-knighthood days proves to be a bold departure. In the original story, Gawain is an already-knighted supporter of King Arthur (Sean Harris), but in Lowery’s version, Gawain’s not-yet-ascended youthfulness adds an element of eager yearning to his personality. And eager he is. When the towering Green Knight (Ralph Ineson) visits the King’s castle one Christmas Day and dares anyone to strike a blow to him as long as he can do the same to the striker a year and a day later, Gawain jumps at the chance to impress the crowded court. After Gawain lops off the intruder’s head, the Green Knight picks it up and exits with a mirthful laugh, starting the countdown to Gawain’s mandated repayment. 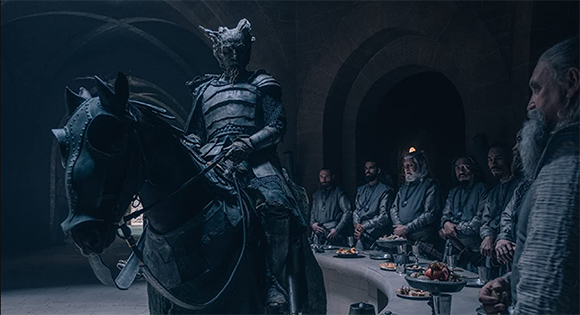 This early scene suggests that The Green Knight might simply end up a nifty, if antiquated, riff on age-old tales of honor lost and gained, but as its scope widens and tracks Gawain through the ensuing year and then through his reluctant journey to reunite with his adversary, the film takes on darker and richer layers that problematize and reimagine what true heroes actually can, should, and need to be.

It’s not always easy going, for Gawain or for the audience. The plot meanders and scenes connect with dreamlike non-logic, but this wandering is a large part of the point. Along the way, archetypal characters offer further complexity, representing familiar types and tropes, but skewed just enough to keep ratcheting up the sense that Gawain’s accepted reality is in dire need of skewering. This quest prompts questions Gawain never thought he would need to ask and soon these questions become more important than any answers a more straightforward adaptation might present. 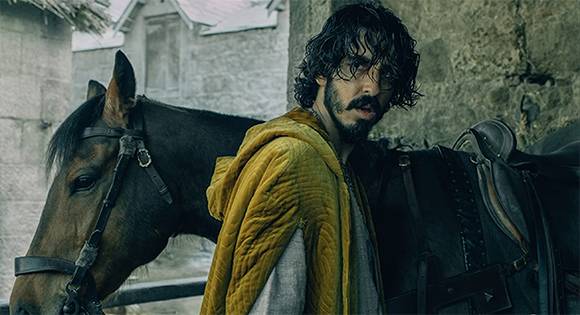 Less patient viewers might feel their attention flagging, but the need for patience is also essential to the message. While the visuals thrill often enough and there is ample familiar fantasy fun in this cursed hero’s tale to entertain through the sloggier stretches, The Green Knight rewards those willing to open their minds to a subtler, cerebral experience. Careful viewing and listening reveal creative critiques of warmongering patriarchy, extractivism, toxic masculinity, and many other very real, very current, very relevant collective curses, even if they are never loudly named.

In fact, the most affecting thread throughout all of Gawain’s interactions on his path to payback is the exploration of the divide between the selfless awe invited by the natural world and the anthropocentric self-centeredness promoted by the world of Arthur’s court. Though Lowery rarely connects any dots for the audience and instead leaves the film’s impressionistic events to needle themselves into the mind and heart, there is a clear and constant juxtaposition between the ugly grey world within which Gawain is fighting to find his appointed place and the gorgeous green world whose blossoms and tendrils are being decimated by human exploits and exploitation. As Gawain delves further into the mysterious possibilities that lie beyond the achievement-addicted law and order of the world he knows, a particularly fecund maturation develops and he encounters a kind of bravery he never could have imagined behind the kingdom’s walls.

The Hero’s Quest is an ageless font from which countless yarns have stemmed, but The Green Knight, as obscure and measured as it sometimes is, powerfully turns the accepted idea of heroism on its head, upending the assumptions about honor that our society has celebrated for centuries. It dismantles the dangerous ways humans continue to view success. It lays bare the poisonous lies at the root of the dogmatic belief systems that kill our curiosity about the myriad mysteries around us. It shows how violently the shadow sides of our heroic aims often block out the very color and light that could transform us into something far more alive than our creaky, outmoded, old stories would have us believe. It’s a beautifully shot bildungsroman for a far-from-beautiful world, a world that regularly refuses to commit to shedding its childish obsessions in order to grow up. It’s a fairy tale that feels just familiar enough to plainly and painfully show us the paths we’ve classically trod while providing directions just disorienting enough to lead us where we need to go.