Directed by Michael Sarnoski
A touching meditation on grief and a critique of the high-end restaurant scene.

Loss leaves a gaping hole in our hearts. We try to bring back the happy days when we were together with a loved one, but no matter how far we stretch our memories, we cannot control the present moment by pretending that what's gone is still here.

Rob (Nicolas Cage) is a reclusive man who lives in a shack in the Oregon wilderness. His best friend is a gifted pig who helps him find truffles buried in the ground. Although his greatest fear is being attacked by hungry wolves, the worst thing that can happen does one night. Intruders break into his house, knock him out, and steal his beloved pig. 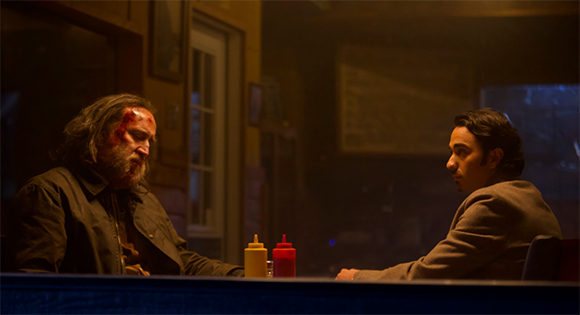 Rob is used to doing everything himself but now he must rely on Amir (Alex Wolff), a young entrepreneur who stops by weekly to pick up truffles to resell to Portland's high-end restaurants. Disheveled and covered in blood, Rob now insists that Amir drive him into the city to find his pig. At a fight club in the seamy side of the city that caters to restaurant employees, Rob allows himself to be beaten up in hopes that someone there knows where he can find the pig.

His quest forces him to admit to Amir that he was once a major player in Portland's culinary business. Visiting old acquaintances and a popular restaurant, he surprises everyone with his disdain for the "foodie scene" and its chefs who put profit over the art of cooking. He connects this prophetic message with a lament for the destruction of the environment and what he sees as the end of the world. Both trends and the general rottenness of society are personified in Darius (Adam Arkin), a rich, powerful, and malevolent wheeler dealer, who appears to be the best lead to the pig. 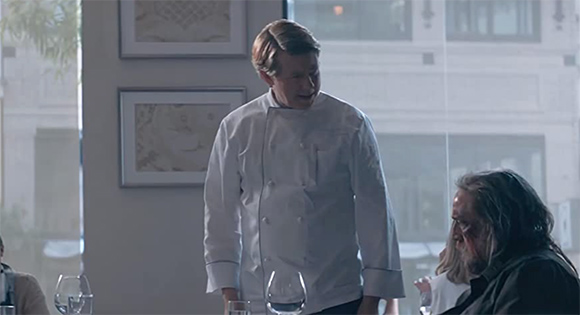 There are plenty of "bad guys" in this story, but in his first feature film, writer and director Michael Sarnoski refuses to serve up another tale of revenge and violence. He is much more interested in Rob's motivation for his quest. "We don't get a lot of things to really care about," the old man says. Does he want to find his pig so that he can continue to profit off the truffles he finds? Is he like Amir and Darius focused on wealth? Asked why he is going to all this trouble when he could simply buy a new pig, he replies. "I love her."

Sarnoski offers a stinging critique of the restaurant scene and its appeal to the elite and disregard of the workers. But it is the meditation on loss and grief that comes through Rob's story that is most touching.