Directed by Aaron Sorkin
Behind-the-scenes of the popular sit-com with its accomplished and controlling stars.

Popular culture during the 1950s was conflicted, but one of the sure things was the popularity of the TV sitcom "I Love Lucy" starring Lucille Ball and her husband, Cuban-American band leader Desi Arnaz. In a time when there were only a few TV channels, this weekly program reigned at the top of the ratings, attracting as many as 60 million viewers. The story focused on Lucy and Ricky, a couple living in a Manhattan brownstone, who had good and often silly times. Their neighbors, Fred and Ethel, joined in the fun with food fights, sing-alongs, and loud quarrels. For six seasons, Lucy and Ricky's home was home to those who spent every week with these friends whose foibles and follies seemed to match their own.

In this biopicture, writer and director Aaron Sorkin takes us behind-the-scenes for one week as Lucille (Nichole Kidman) and Desi (Javier Bardem) are rehearsing a show about a fight between their neighbors Fred (J. K. Simmons) and Ethel (Nina Arianda). Lucille is not happy with either the staging nor the script and insists upon changes. We get a glimpse into the star's involvement which we sense was largely responsible for the show's incredible success. 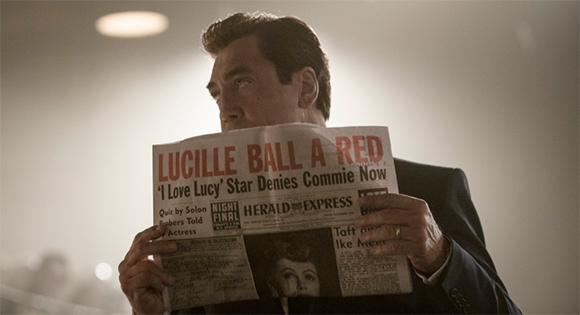 During this week, however, three events have upset the mood on the set (all true, but not necessarily at the same time.) First, the gossip columnist Walter Winchell has claimed that Lucille is a card-carrying Communist, forcing her to appear before the House Committee on Un-American Activities. Second, a tabloid has insinuated that Desi has been having affairs and does not really "love Lucy." And third, Lucille announces that she is pregnant and wants the pregnancy written into the series storylines, despite the objections of the network.

Sorkin gives us glimpses of the genius behind the comedy, including the famous sequence when Lucy stomps on wine grapes in France. We see how the business came first for Lucille and Desi, and we are not surprised when we read in the end credits of their divorce. 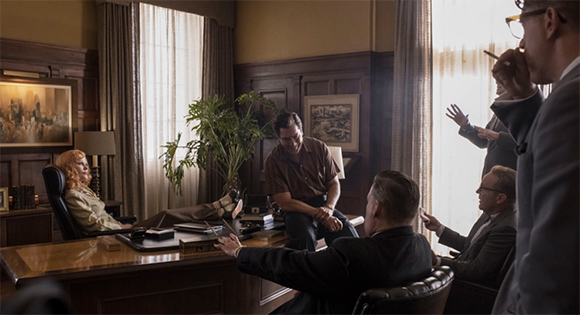 Why visit this couple's story 70 years after their show was the talk of the nation? There is not a lot new here, especially for fans of the show, but there is enough to keep our interest, especially when we realize that Lucille Ball went on to head Desilu Productions and become the first woman to be in charge of a major Hollywood studio.