It’s a commonly held belief that art has the power to heal. Procession puts this assertion to the test. Robert Greene’s experiment in the transformative potential of documentary filmmaking follows six survivors of childhood sexual abuse at the hands of priests as they support one another through a radical form of creative therapy. The men fight demons and form bonds by revisiting the places they were betrayed, reliving their horrifying experiences through reenactments for which they serve as writers, directors, and consultants, and taking part in the retelling of one another’s stories. It’s a difficult viewing experience, asking the audience to bear witness to still searing pain, but there is also ample hope to be found in the uncommonly intimate light it sheds on truths that are aching to be told.

With the help of attorney Rebecca Randles, trained drama therapist Monica Phinney, and child actor Terrick Trobough, Greene’s team listens closely to each man and works with him to convey the memories of each life-altering moment using a variety of genres and disparate storytelling techniques. Each exploration is built to the specifications of the survivor at the helm. The scenes vary from the extremely realistic to the abstract to the fantastical, including one in which a priest’s eyes glow green.

These men not only tell their own tales; they also portray the victimizers and other characters in one another’s recountings. The point is not only to tap into the trauma but to give individual and collective voice to those who were victimized and offer them agency again in the very places where theirs was once taken away.

Procession obviously walks a very fine line. Asking its protagonists to not only talk about their trauma but to actually dive deeply into it has the potential to end in disastrous results. What Procession does best is stay constantly aware of the delicate balance it is striking and show how each survivor’s experience is simultaneously common and unique to the others. 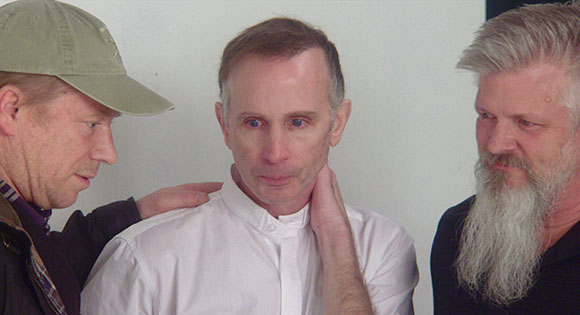 The men — Joe Eldred, Mike Foreman, Ed Gavagan, Dan Laurine, Michael Sandridge and Tom Viviano — of course share analogous details between their stories, but each approaches his pain, his anger, and his grief in his own way. The fact that the film focuses on one main moment for each of these men and leaves viewers to wish we knew more about all of them serves to make the film’s point. Decades after these appalling incidents occurred, the shadow of abuse looms large over every other part of their lives, always present, even beneath smiles and inside laughter.

To its core, Procession is clearly an angry indictment of the priests and the Catholic institution that covers up their sins, but through its esoteric approach, the film becomes something far more powerful than a mere takedown. It’s actually more affecting and effective as an honest lifting up of a group of survivors who desperately want to reclaim what has been taken from them and take small steps toward doing just that. Over the course of its running time, skepticism gives way to trust, fear gives way to connection, and resignation gives way to a kind of cautious resurrection.

These men are too smart and their wounds are too deep to suggest that complete healing has occurred, but as they sensitively dress and artfully address one another’s injuries while cradled in the co-creative care of community, tentative strides toward transformation become plainly visible, even if the next steps remain maddeningly unclear.

Film: Mea Maxima Culpa: Silence in the House of God

A Prayer for the Victims of Sexual Abuse