Directed by Tom McCarthy
A convincing affirmation of investigative journalism and a ringing condemnation of sexual abuse by Catholic priests.

The 2003 Pulitzer Prize for Public Service was awarded to The Boston Globe for its courageous, comprehensive coverage of sexual abuse by priests, an effort that pierced secrecy, stirred local, national and international reaction and produced changes in the Roman Catholic Church.

The Catholic Church has always been an influential institution in Boston, the only metropolitan area in the U.S. where Catholics make up more than half the population. Although cases of sexual abuse of children perpetrated by Catholic priests had become public in the early 1990s, many prosecutors, judges, and politicians remained loyal to the faith of their ancestors and turned their eyes away from the growing body of evidence. By doing so, the system made it possible for priests to continue their sexual assaults with the knowledge that they were outside of the law. After all, who would dare "sue the church"?

The Catholic Church was also complicit in keeping the abuse under wraps. The Archdiocese either ignored or paid off victims, settling cases through private mediations to avoid the court system. Instead of dismissing predator priests, they reassigned them to other parishes or gave them "sick leave" and a stay at a treatment center. 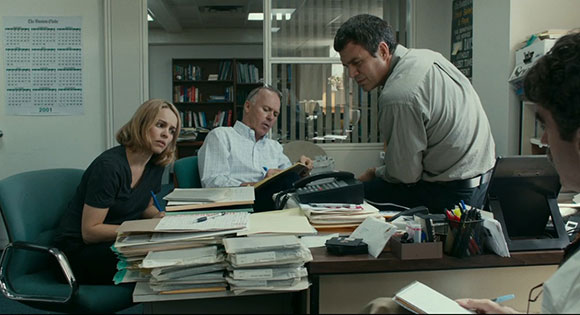 Spotlight is a chilling and ethically cogent film about the Boston Globe's Pulitzer Prize-winning expose of sexual abuse by Catholic clergy that revealed the breadth and depth of these horrific crimes against society's most vulnerable members — children. One of the many reasons why this sobering film is so emotionally riveting is that its director, Tom McCarthy, has the special gift for creating memorable character-driven films such as The Station Agent and The Visitor. He and co-writer Josh Singer introduce us to a stirring circle of colorful journalists who are animated by a zealous pursuit of justice and truth. They also manage in a crosscut of scenes to reveal the pain and the suffering of abuse victims. 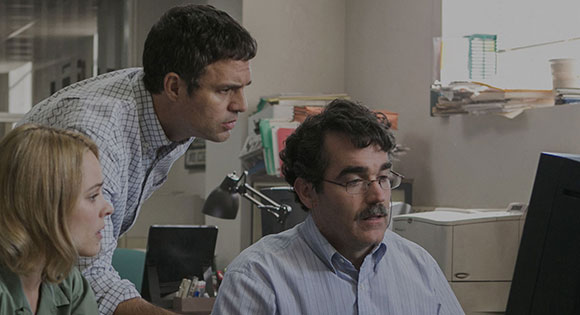 Among the journalists who stretch themselves to reveal the complicated ethical dimensions of this story are the four-person investigative "Spotlight" team: Walter "Robby" Robinson (Michael Keaton), Mike Rezendes (Mark Ruffalo), Sacha Pfeiffer (Rachel McAdams), and Matt Carrol (Brian D'arcy James). They are asked to pursue the story vigorously by Marty Baron (Liev Schreiber), the new editor of the paper who wants to make an impact upon the Boston community, even though their immediate superior, Bed Bradlee Jr. (John Slattery), is not so sure they can successfully challenge the church. 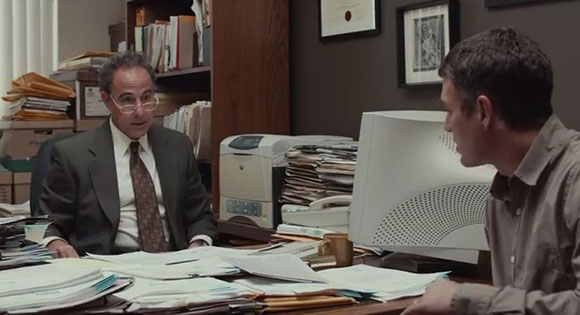 These intrepid reporters track down witnesses, interview a diverse group of victims, and discover a way to identify priests who may be abusers, thus breaking through the walls of secrecy that have been erected to protect the Catholic church from culpability. Even when they are have proof that they can accuse as many as 70 priests, Baron urges them to go further and show that the church itself has engaged in a massive cover-up. 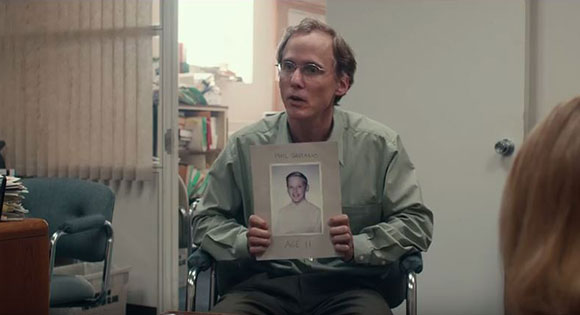 Other top-notch performances include Stanley Tucci as Mitchell Garabedian, an attorney representing 86 victims in the case against Father John Geoghan; Jamey Sheridan as a church-connected friend of Robinson's; and Billy Crudup as a slick lawyer defending Catholic institutional power. After hearing their explanations of how confidentiality rules and other pressures make it nearly impossible for outsiders to get to the truth, we understand Garabedian's comment that "If it takes a village to raise a child, it takes a village to abuse one." 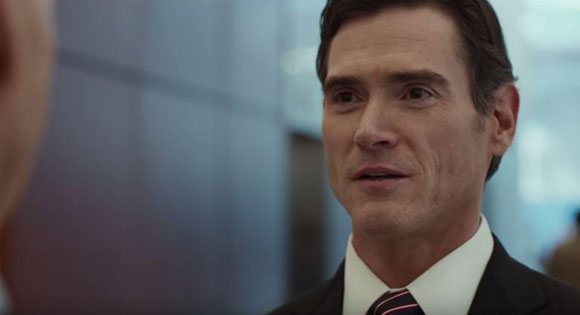 Spotlight hits the mark with its searing depiction of the Catholic Church's efforts to shield priests and do whatever necessary to maintain its power and wealth. The film also shows the shocking lack of human feeling for the victims. As Phil Slaviano (Neal Huff), the leader of a victims' support group explains, rape is not just physical abuse; it is also spiritual abuse, taking away a child's trust and faith.

At the end of the film, we learn that eventually 249 Boston area priests were identified as sexual predators, with over 1000 victims. And that is only a small piece of the overall picture. A long scroll of city names identifies other places around the globe where child abuse by priests has been documented. Leaving the theatre we found our hearts heavy with sadness for the Catholic Chuch and compassion for its victims.

In a UN Rights Committee report issued in February, 2014, a panel criticized the Catholic Church for still protecting predator priests. They called for the Vatican to remove all suspects from their posts and to open up its confidential archives in order "to hold abusers accountable."

In its most scathing section, this report stated: "The committee is gravely concerned that the Holy See has not acknowledged the extent of the crimes committed, has not taken the necessary measures to address cases of child sexual abuse and to protect children, and has adopted policies and practices which have led to the continuation of the abuse by and the impunity of the perpetrators." (LATimes.com, February 5, 2014).

R - some language including sexual references