Directed by Chinonye Chukwu
Inspiring and touching story of a Black mother whose bearing witness catalyzed the civil rights movement.

“We are each absolutely essential, each totally irreplaceable. Each of us is the swing voter in the bitter election battle now being waged between our best and worst possibilities.”
─ John-Paul Flintoff in How to Change the World

The murder of Emmett Till (Jalyh Hall), a 14-year-old African-American boy on August 28, 1955, catalyzed the civil rights movement in the United States. His grieving mother became a major force in convincing the public to look closely at the brutal effects of racism.

Mamie Till (Danielle Deadwyler) is a working class widow whose husband died overseas during the war. She is very protective of her son Emmett. When he begs to be allowed to visit his cousins in rural Mississippi, she warns him that attitudes toward Blacks there are very different from what he knows from living in Chicago; he should steer clear of white folks and be careful how he acts in their presence. But she finally agrees to let him go. 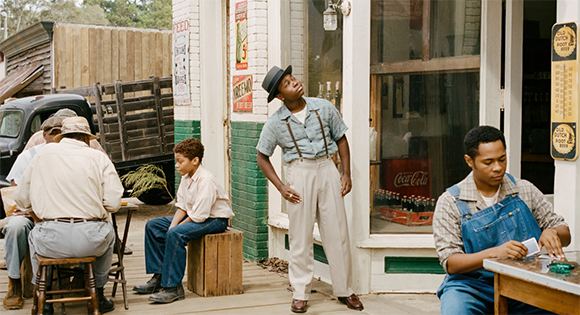 Emmett enjoys staying with this uncle Moses (John douglas Thompson), a sharecropper, but he doesn’t warm to working in the fields picking cotton. On a trip to town with his cousins, his casual and friendly personality comes to the fore when he allegedly flirts with a white woman in a store. A few days later, her husband and some other white men arrive at Moses’s house with guns drawn and demand that he turn over the Chicago boy. A few days later, Emmett’s body is found in the local river, bloated and swollen, his face almost unrecognizable.

“Bearing witness involves a sense of interconnectedness, a direct realization of the wholeness of life.”
─ Jules Shuzen Harris in How To Practice Bearing Witness

Many films about the civil rights movement focus on the male leaders. But director Chukwa puts the emphasis on Mamie’s spiritual journey and the many ethical choices she must make along the way. Among them are holding an open-casket funeral for Emmett and allowing the media to publish photos of his mutilated face. In a NPR Interview, the director states:

“Without Mamie Till-Mobley, the world wouldn’t know who Emmett Till was. She wanted the world to witness what happened to her child. . . . I knew that the physical violence that was inflicted upon Emmett was not a necessary or important part of the story I wanted to tell, which was that of Mamie’s journey and her becoming an activist ─ and also the love and humanity that existed between her and her child.”

“So she wanted the world to witness what happened to her child so then this can stop happening to other Black children, Black people. And so it was out of care and love that she has for Black people and Black lives and Black humanity.” 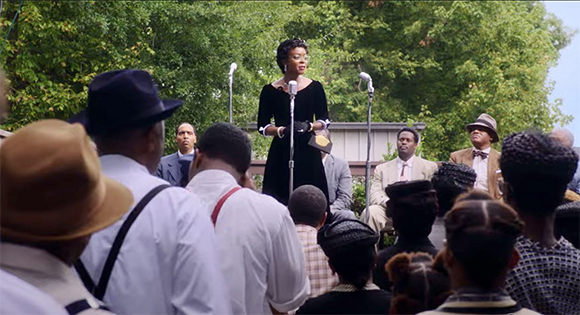 It was Mamie’s courage, her willingness to speak out by taking a dangerous trip to Mississippi to testify at the trial of Emmett’s murderers, her insistence that the public face what was being done to Blacks that woke up many white Americans.

“It’s a myth that spiritual people are not attached, that they’re somehow above the trials and tribulations of ordinary life. Not only are they affected by things, they’re tremendously affected by them. For rather than living in the realm of ideas and feelings about suffering, they live in the realm of action.”

”When we bear witness, when we become the situation — homelessness, poverty, illness, violence, death — the right action arises by itself. We don’t have to worry about what to do. We don’t have to figure out solutions ahead of time. Peacemaking is the functioning of bearing witness. Once we listen with our entire body and mind, loving action arises.

“Loving action is right action. It’s as simple as giving a hand to someone who stumbles or picking up a child who has fallen on the floor. We take such direct, natural actions every day of our lives without considering them special. And they’re not special. Each is simply the best possible response to that situation in that moment.”

With its urgent portrait of loving action and bearing witness, Till is one of most spiritually literate films of the year. And at the heart of this Black freedom struggle is an Academy Award caliber performance by Danielle Deadwyler.