Directed by Jim Sheridan
A stirring and triumphant biodrama about Christy Brown, who overcame being severely handicapped by cerebral palsy.

This stirring and triumphant biodrama is about Christy Brown, who overcame being severely handicapped by cerebral palsy and became an artist, writer, and husband. In the opening scene, Christy (Daniel Day-Lewis) is taken to a charity event where he is to read from his autobiography. While he waits for his slot on the program, a nurse (Ruth McCabe) is assigned to watch over him. She reads his story, and we flashback to Christy's childhood.

Mrs. Brown (Brenda Fricker) and her husband (Ray McAnally), a bricklayer, live in Dublin with their large family. Although Christy has cerebral palsy, his brothers cart him around in a wheelbarrow. At the age of seven, he makes a mark with chalk grasped between the toes of his left foot, the only functional limb on his body. At nine, Christy wins the respect of his stern father by writing "mother" across the floor. However, not even his artistic talents expressed in paintings can make him acceptable to a girl he fancies.

Similar to Gaby: A True Story (1987), My Left Foot, directed by Jim Sheridan, is an unflinchingly honest portrait of a fiercely determined individual struggling to fulfill his dreams. In the most poignant performance of his career, Daniel Day-Lewis conveys Christy Brown's intensity, ardent willpower, and desperate yearning to find a woman who will love him. He mistakes Dr. Ellen Coe's (Fiona Shaw) professional interest in him for affection. She helps him improve his speech by reading selections from Shakespeare and arranges for an exhibit of his paintings. Christy, distraught when he learns of her engagement to someone else, attempts suicide.

The warmth of his family envelops him, however. Following the death of his father, Christy's autobiography is published. He gives the money to his mother. The film ends with Christy going out on his own with his nurse, the woman he eventually married.

Special features include the real Christy Brown, An Inspirational Journey: The Making of My Left Foot, a still gallery, and reviews of the movie. 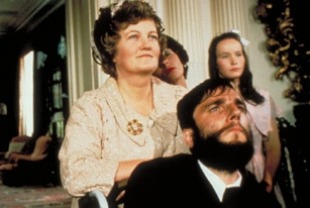