Born on the Fourth of July

Directed by Oliver Stone
Reveals the heart-affecting story of some individuals whose traditional patriotism was ambushed by the Vietnam War and reborn in political protest.

Ron Kovic grows up in Massapequa, Long Island, as the eldest son of an A&P manager and his very religious Catholic wife. A natural athlete, he excels in high school sports. A proud patriot, Kovic tells his parents that he is willing to lay down his life for his country.

All his dreams of the romance and glory of war are obliterated, however, when he is sent to Vietnam. There he accidentally kills innocent children and a Marine from his own unit. Wounded in battle, he returns home in a wheelchair, paralyzed from the chest down. For a while he lives with his family and feeds off his America love-it-or-leave-it philosophy. But soon Kovic sinks into an alcoholic depression. He travels to Mexico where he comes face-to-face with his own bitterness and self-destructiveness in the person of another disabled vet. Kovic decides to turn his life around.

The journey to self-renewal and political radicalization begins with a visit to Georgia where he confesses his guilt to the family of the Marine he shot. He then links up with the organization Vietnam Veterans Against the War and leads a demonstration at the 1972 Republican National Convention in Miami. The film closes just before Kovic is to give a speech at the 1976 Democratic Convention in New York City.

Born on the Fourth of July, based on Ron Kovic's 1976 autobiography, is an explosive, episodic, and emotionally riveting film directed by Oliver Stone, who won an Oscar for Best Director. Tom Cruise gives a near-perfect performance in the lead role, capturing all the changes in this all-American boy who proudly went off to fight in Vietnam as a Marine and returned, in the character's own words, as "Memorial Day on wheels." Stone and Kovic, who wrote the screenplay, see the experiences of this young man as emblematic of the violated lives, bodies, and souls of other men who served in Vietnam. Born on the Fourth of July is about individuals whose traditional patriotism was ambushed by this terrible war and reborn in political protest. 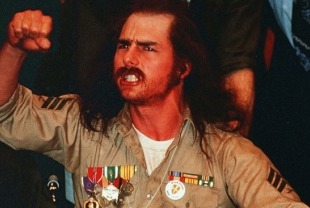