Directed by Stephen Frears
Centers on an eight-year-old boy in Liverpool whose openheartedness is dashed by the hellfire and brimstone theology of the Catholic church and his father's hatred of foreigners.

In the buoyant opening scenes of this earnest drama set in Liverpool during the 1930s, eight-year-old Liam (Anthony Borrows) and his older sister Teresa (Megan Burns) are peering through the window of a pub watching their father (Ian Hart), mother (Claire Hackett), and brother Con (David Hart) celebrating the start of a New Year. But sooner than you can snap your fingers, the Sullivan family is plunged into the poverty and the hard times of the Depression.

Dad is laid off at the shipyard and can't even find temporary work. His oldest son becomes the main family breadwinner. Teresa helps out with the money she earns cleaning the house of a wealthy Jewish family. Depressed and very angry over his helplessness, Dad joins a local Fascist Party that blames England's difficulties on outsiders — Jews and the Irish.

Stephen Frears (High Fidelity) directs this intimate working-class drama with the same intensity and reverence for small details he revealed in two of his earlier films: My Beautiful Laundrette and The Snapper. The screenplay by Jimmy McGovern (The Priest) savages the Catholic church for terrorizing youngsters with its hellfire and brimstone dogma and authoritarianism.

Most of the drama is presented through the experiences of Liam, a very impressionable and eager youngster who stutters. In a surprising moment at home, he catches a glimpse of his naked mother. The boy is troubled by the fact that her body doesn't match the pictures of nude women painted by the Old Masters.

Meanwhile at his Catholic school, the teacher (Anne Reid) tries to induce guilt in her students by telling them that their souls are filthy. A scary priest (Russell Dixon) looms over the boys and warns that each time they sin they "drive the nails deeper into the hands of Christ."

Anger about all the money his wife gives to the church and further enraged when they have to buy Liam a new suit for his first communion, Dad stands up on Sunday morning and lashes out at Jesus Christ for having gotten everybody in the poor community "skint." Caught in a crossfire of conflicting emotions, Liam begins seeing images of hellfire everywhere he looks.

The open-heartedness of this eight-year-old boy is dashed by the world-hating dogma of the church and the stranger-hating prejudice of his father. Thomas Moore has written: "Xenophobia is an infection of the soul particularly virulent in our times, but it is not a fear only of foreign people. It's a deeply disturbing anxiety that affects everything we do." This convincing drama presents the shadow side of the spiritual practice of openness and the dire effects such a toxic view of reality can have on the soul of a young boy. 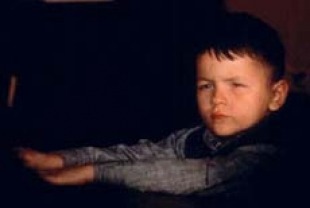