Directed by Christine Lahti
The charming story of an unusual couple which reveals the transforming power of friendship.

Jennifer (Leelee Sobieski) is a seventeen-year-old Los Angeles high school graduate with multiple piercings, tattoos, a goth/punk wardrobe, and a cat named Black. She loves Sylvia Plath, writes poetry, and composes draft eulogies for herself. Jennifer can't abide her dysfunctional family, which includes an overly cheery mother (Carol Kane), who doesn't know how to relate to her, and a stepfather (Michael McKean), who doesn't like her. She doesn't see much of her father (John Goodman), an aging hippie wrapped up in his own small world. Self-mutilation is one way Jennifer expresses her anger at herself and her plight.

While looking for a way to earn some money, this rebel meets Randall (Albert Brooks), manager of a men's clothing store in an upscale mall. Much to her surprise, he agrees to give her a job in the stockroom provided she becomes more presentable.

Despite their many external differences, Jennifer and Randall discover they have a lot in common. As their friendship slowly unfolds, they share secrets and call each other by their initials, J and R. This 49-year-old man is divorced and frightened about almost everything. The only one on earth who seems interested in him is Patty (Mary Kay Place), a nurse, who sees him once in a while. J, of course, is just as lonely and estranged as he is.

A step at a time, they begin to help each other. R helps J get a new wardrobe so she can move into sales in the front of the store. He also helps her find an apartment. She does her best to loosen him up a bit on several adventures. In one of the most poignant scenes in the film, J takes R to a favorite place, her grandmother's grave. They both lie on the ground and R feels the energy from the other world.

Actress Christine Lahti won an Oscar for her short film Lieberman in Love. This is her debut as a feature film director. She hits the bull's eye by drawing out top-drawer performances from Sobieski and Brooks. The creative screenplay by Jill Franklyn convincingly reveals the transformation these two friends bring about in each other. Relationships are holy. They can release us from the prison of fear, expand our hearts, and open us to the redemptive power of love.

When a major crisis overtakes R, J is there to provide him with all he needs to go through it with dignity and hope. In the process, J learns to trust in what she calls "the F words — friends, family, faith, forgiveness, and forever." By the end of the story, she has found fresh reasons for affirming life. Her last words are: "I think it's time I got out of the eulogy business." 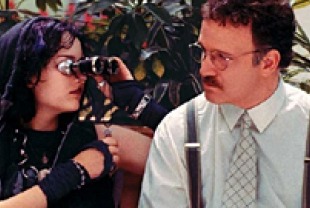