Directed by Richard Eyre
An intimate and poignant portrait of the unconventional marriage of philosopher and novelist Iris Murdoch and her literary critic husband John Bayley from their first encounter in the 1950s until her death of Alzheimer's disease in 1999.

While she is working on her 26th novel, Jackson's Dilemma, novelist Iris Murdoch (Judi Dench) complains to her husband John Bayley (Jim Broadbent), a literary critic, that her mind is playing tricks on her. "I feel like I'm sailing into darkness." It turns out she has Alzheimer's disease, an irreversible brain disorder with no known cause or cure. While Iris's memory begins to fade, her husband's mind is flooded with scenes from their past.

In a flashback, we see the ebullient and youthful Iris (Kate Winslet) roaring down a hill on a bicycle with John (Hugh Bonneville) trying desperately to follow her. "I can't catch up to you," he says. "Speed up," she responds. It is a telling moment in their relationship. Iris would always outdistance her shy and socially awkward husband.

Another time early in their relationship, Iris slips and falls down the stairs. Instead of being embarrassed, she explodes with laughter from the depths of her soul. John realizes that the woman he loves not only has the clearest mind of anyone he's ever met, she also marches to the beat of her own inner drummer.

When John complains about not being at the center of her life, Iris responds, "You know more about me than anyone else. You are my world." He responds with a heartfelt "thank you."

Their literary marriage bears no children but does yield plenty of written offspring. Murdoch prizes the freedom of her mind above all else, seeing it as a seedbed of imagination and the perfect milieu for any happiness that comes her way. When words start to fail her, she is bereft. Her husband can only weep as he watches her loss of memory and language. Gradually even the simplest skills are forgotten, and John is forced to handle everything for the two of them. In a moment of deep anguish, he unleashes the anger that has been accumulating over the years, screaming at Iris: "Now that I have you to myself, I loathe you." But the rage passes, and he tenderly returns to his caretaking acts of love.

Richard Eyre (The Ploughman's Lunch) directs this bittersweet drama of an unconventional love that lasted over 40 years. The screenplay, written by Eyre and Charles Wood, enables us to see and to feel the enduring spiritual connection that keeps Iris and John together. Their bond reminded us of some lines of dialogue from a long-gone U.S. TV series called United States about a married couple. At one point, he declares: "I love you. I will always love you. Even if there were no more 'you' to love, I would love your very absence." Iris records the astonishing breadth and resiliency of such love.

For his performance as the older John, Jim Broadbent received the Oscar for Best Actor in a Supporting Role, and Judi Dench and Kate Winslet were both nominated for their roles as Iris. The DVD edition includes a brief message from actor David Hyde Pierce, who has been active in fundraising for Alzheimer's, and film of the Alzheimer's Association giving an award to Jim Broadbent. It also includes a "making of" Iris featurette. 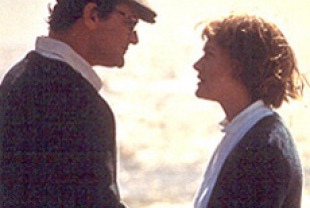 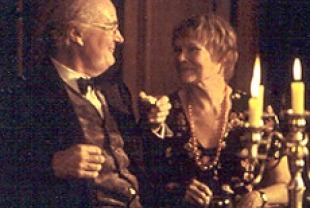