Directed by Peter Bogdanovich
Sparkles with its deft portrait of amorality amongst some Hollywood movers and shakers.

"There is no stronger test of a person's character than power and authority, exciting as they do every passion, and discovering every latent vice," Plutarch wrote centuries ago. The Cat's Meow probes this moral ground in a clever and entertaining drama set in Hollywood during the 1920s. Peter Bogdanovich (The Mask) is at the helm, directing from a screenplay by Steven Peros based on his play.

The narrator, Elinor Glyn (Joanna Lumley), is an English novelist who has been invited to attend the birthday celebration of Thomas Ince (Cary Elwes), a film director who pioneered cowboy pictures. The festivities are to be held aboard the luxurious yacht of media mogul William Randolph Hearst (Edward Herrmann), who is hosting the event with Marion Davies (Kirsten Dunst), a silent film star who is also his mistress. The other major celebrity on hand is Charlie Chaplin (Eddie Izzard) whose last film Woman in Paris was not successful. The actor and director is prepping The Gold Rush and fending off gossip about the pregnancy of his 16-year-old mistress.

Chaplin is infatuated with Davies and convinced that she should be doing comedy rather than serious drama. Hearst, who is insanely jealous and prone to spying on Marion, enlists Ince to keep an eye on her over the weekend. This filmmaker wants to merge his operation with Hearst's Cosmopolitan Pictures. Also aboard the yacht is Louella Parsons (Jennifer Tilly), a New York based film critic for one of Hearst's papers. Although she comes across to everyone as socially awkward, this young lady proves herself to be a power player when the moment arrives for her to be assertive.

The Cat's Meow sparkles in its deft portrait of these members of Tinseltown, all seasoned veterans of gossip, wealth, paranoia, and celebrityhood. The linchpin of the drama is the murder of Ince and the cover-up that follows. It is based on a true incident and provides us with another glimpse into Hollywood where, as one of the characters sadly concludes, "morality vanishes without a trace."

The DVD release includes a nice package of extras considering the film's characters and theme. Peter Bogdanovich provides an audio commentary. There are also two featurettes: "It Ain't as Easy as It Looks" covers the making of the film in rehearsals and on location; "Anatomy of a Scene" comes from the Sundance Channel's series and focuses on the dinner party for Thomas's birthday. There is also a old Charlie Chaplin short film, "Behind the Screen" and a vintage newsreel. 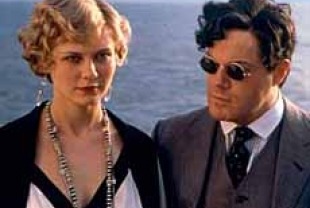 Pg-13 - sexuality, a scene of violence, brief drug use