Directed by Abbas Kiarostami
A heart-wrenching documentary about efforts being made in Uganda to look after 1.6 million orphans whose parents died of AIDS.

In this heart-wrenching documentary, Abbas Kiarostami (The Wind Will Carry Us), one of Iran’s premier filmmakers, spends 10 days in Uganda at the request of the UN’s International Fund for Agricultural Development. One of their special projects is Uganda’s Women’s Effort To Save Orphans (UWESO). This African nation has a population of 22 million with 2 million infected with HIV, 2 million already dead, and 1.6 million orphans.

In each village he visits, Kiarostami films eager children crowding around him, their faces beaming with excitement. They are really happy when he shows them their pictures on the digital camera’s screen. Most of these kids are invisible in this country torn apart by civil war. Everyone is so consumed by the struggle to stay alive, they have no time for the orphans — except for some elderly women who have volunteered to care for the children through a program started in 1986. Similar to all the grandmothers providing child care in America’s inner cities, they are the presence of God in these poverty-stricken communities.

Kiarostami visits an AIDS treatment center where the staff is overwhelmed with patients. One unsettling scene shows a nurse wrapping the dead body of a child who is carted away in a cardboard coffin on the back of a bicycle. One lucky Ugandan child found on the streets by a nun is adopted by an Austrian couple.

Perhaps the most poignant scene occurs during an electrical blackout at the filmmarkers’ hotel late one evening. Kiarostami and his crew stumble around in the dark trying to find their way back to their rooms. This serves as a fitting metaphor for the helplessness the director feels in the face of the staggering orphan program in Uganda. 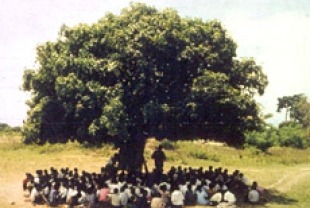