Directed by Martha Coolidge
An impressive movie about the scars from the Vietnam war left on the minds, bodies and souls of soldiers and citizens.

Coming Home is an impressionistic meditation on the Vietnam war and the scars it has left on the bodies, minds, and souls of many soldiers and civilians. It is the fourth in a series of recent movies on this difficult subject — Heroes, The Boys in Company C, and Rolling Thunder. The script by Nancy David (Slapstick) was reworked by Waldo Salt and Robert C. Jones. It carries well until midpoint in the story and then spins off course with anti-war rhetoric replacing convincing character development. Nevertheless, Coming Home stands as the best attempt so far to deal with the Vietnam war on the American public.

The time is 1968. The setting, a marine base outside Los Angeles. Captain Bob Hyde (Bruce Dern), a career officer, is about to leave for a stint in Vietnam. He's a disciplined man who believes that he will return from overseas with proof of his ability to command. Sally (Jane Fonda) is his loyal and subservient wife, a woman who a few hours after he has left tears up over the playing of "The Star-Spangled Banner" on TV.

Jolted by the shock of Bob's departure, she becomes friends with Vi Munson (Penelope Milford), a peppy nutritionist at the Veteran's Hospital. Sally volunteers to work at the hospital rather than stay at home unoccupied. In the course of her duties, she runs across Luke Martin (Jon Voight), a high school classmate and former football star. He's now a paraplegic veteran who can't get the stink of war out of his system. Sally's care for him as a person turns into affection and then love. She helps transport him back into the land of the living. Vi's brother Bill (Robert Carradine) is not so fortunate — neither Luke's friendship nor his sister's love can bring him back to reality.

Director Hal Ashby (Bound for Glory) draws out Jon Voight's best performance since Conrack. His rage contains an authenticity beyond all the sound and the fury. And his graceful glide into tenderness is, at moments, quite touching. There is a magic in the bond between Sally and Luke which gives the first half of Coming Home a special texture. Part of the credit goes to Jane Fonda who convincingly portrays Sally's transformation from a traditional officer's wife to an individual with her own strong nurturing values.

Bruce Dern's depiction of Bob is not entirely persuasive. His character also undergoes some drastic changes. His warrior myth is shattered and his self-esteem badly marred while overseas. In the end, he just can't except the degrading Vietnam scene and his own failure to handle it with dignity.

One of the most unique features of Coming Home is Ashby's creative use of popular music as both a mood maker and a reflection of the times. Snatches of songs by the Rolling Stones, Bob Dylan, Janis Joplin, Richie Havens, The Jefferson Airplane, The Buffalo Springfield, Simon and Garfunkel, and others accentuate scenes of love, confusion, anger, visionary protest, dread, and human community. Certainly in this regard, Coming Home. sets a high standard for other films which may follow in the troubling moral issues of the Sixties. 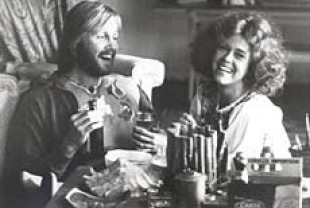