Directed by Knut Erik Jensen
A beguiling documentary about a 30-man choir in a tiny Norwegian fishing village that salutes the cathartic effect of singing.

In the opening scene of this thoroughly enjoyable documentary directed by Knut Erik Jensen, a 30-member male choir from Berlevåg, Norway, stand in the frigid weather singing as a gale force wind whips up the Barent Sea behind them. These stalwart souls love to make music and specialize in folk tunes. In another scene, they sing in the snow while children toboggan down a hill beside them.

Although the small village has lost many jobs in the fishing industry, these men, who range in age from 30 to 96, don't seem to be bothered. They have discovered the cathartic effect of singing — it is their way of being joyful.

The filmmaker introduces us to some of the choir members. A sprightly gentleman who views himself as a lady's man shows off his fast-paced walk. A proud grandfather displays a photograph of triplets born to one of his children. A former amphetamine addict expresses gratitude for his first home. A fisherman reveals his contentment with his fulfilling work. A pastor recalls the death of his brother in a World War II air attack on the town. A musician admits to being a multi-instrumentalist who has an irresistible urge to play.

On a trip to perform in Murmansk in a neighboring region of Russia, the choir members are distressed by the dire effects of pollution and the nuclear power plants on the area. The only defender of the large city of 20,000 is a socialist who weeps at a war memorial. At the concert, the choir director, who leads from his wheelchair, is at first worried that the men have a bad case of stage fright. But they win over the audience with their jubilant singing. The former addict, happy with all the attention, says, "Some day we are going to be very famous." This unusual and very entertaining documentary already has won awards at various festivals and was a surprise hit in Norway. Don't miss this video! 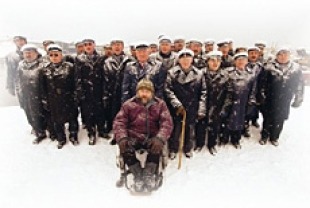