Thirteen Conversations About One Thing

Directed by Jill Sprecher
A graceful film which explores the obstacles to happiness faced by five contemporary individuals in New York City.

Our quiet daily life is penetrated with meaning and mystery. When we take the time to really look and listen, we are often surprised by the simple and the concrete. In Clockwatchers (1977), screenwriters Jill and Karen Sprecher explored the humble experiences of some temp workers and spun out a memorable comedy about time, friendship, and morality on the job. In this substantive and thought-provoking drama, they examine the interconnected lives of five New Yorkers and the obstacles they face in the pursuit of happiness. The clever use of intertitles — such as "18 inches of personal space" or "Once I knew a happy man. His happiness was a curse" — adds spice to these glimpses into the magic, the madness, the serendipity, and the transience of modern urban living.

Walker (John Turturro) is a university physics professor who is having an affair with a colleague, Helen (Barbara Sukowa). When asked what he really wants out of life by his wife, Patricia (Amy Irving), he answers: "What everyone wants: to wake up enthused, to experience life, to be happy." But these ideals are shattered on a daily basis by Walker's boredom and his lack of connection with those around him. He regards contentment as a form of resignation and involvement in the lives of his students as a burden. No wonder Walker is oblivious to the suffering of his wife and the psychic pain of a student who commits suicide.

Troy (Matthew McConaughey) is a successful young attorney who derives great satisfaction from his work of sending criminals to prison for their crimes; he wants to show them there is "order in the world." But he is completely undone when he accidentally hits a young woman with his car on a side street and leaves the scene without helping her. In a moment, the happiness of his carefree existence vanishes. Over the next days, Troy finds himself consumed by guilt.

Gene (Alan Arkin) is the middle-aged head of an office of insurance claims adjusters. He has dutifully played the corporate game for many years in order to get where he is. Overall, he is an unhappy man, divorced and ashamed of his son who is a drug addict. Gene takes out all of his frustrations and boiling anger on Wade Bowman (William Wise), an employee who always has a smile on his face. He wants to burst his bubble and see how "Smiley" reacts when his whole existence is in jeopardy. So when the time is ripe, he fires Bowman. But instead of blowing up or falling into despair, Smiley calmly accepts the news and even puts a positive spin on it. Realizing later that envy has turned him into a bitter and cruel man, Gene secretly arranges for Bowman to be employed elsewhere.

Beatrice (Clea DuVall) is an optimistic and hopeful young woman who works as a housecleaner for an agency, along with Dorrie (Tia Texada). She sings in a church choir and remembers with gratitude having survived a near drowning incident as a girl. But her ardent faith in miracles is tested when she is hit by a car and one of her clients accuses her of stealing his watch. While recovering from the accident, Beatrice dips into a deep depression. Dorrie finds this change in her friend hard to take since she relied so much on her positive outlook on life.

Jill Sprecher directs Thirteen Conversations About One Thing with a graceful fluidity and a deep respect for the individual struggles of the five main characters as they try to discern the meaning of their experiences. The top-drawer screenplay by the director and her sister Karen Sprecher is filled with many moments of subtlety and keen insights into human nature.

Kent Nerburn, one of our favorite spiritual writers, has observed: "We must remind ourselves that, though our lives are small and our acts seem insignificant, we are generative elements of this universe, and we create meaning with each act that we perform or fail to perform." In this context, even a smile can be a saving grace for a person who is drowning in a sea of troubles. The last scene in this very special film will lift your spirits and stir your heart with its beauty and simplicity. 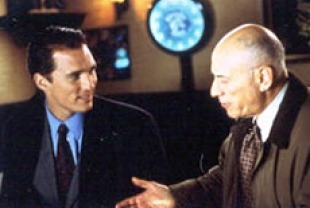 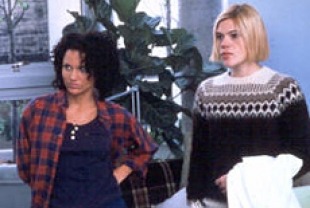