Directed by Herbert Ross
A sensitive depiction of the legendary ballet dancer and choreographer.

Nijinsky was a comet blazing across the sky for a brief period (1906-1917) before disappearing abruptly into the night with only fame to mark his course. His ballet performances were not filmed and he never gave an interview. Only a few extant photographs give us a glimpse of his work. In this highly theatrical film directed by Herbert Ross (The Turning Point) and scripted by Hugh Wheeler, we meet Nijinsky the Polish youth from St. Petersburg who was the toy of Sergei Diaghilev, his mentor and possessive lover. We see Nijinsky's art flourish under the Russian impresario's care — first as a premier dancer and then as a choreographer. And we witness the crackup of his career following his marriage to Romola de Plusky, a plunge which led to schizophrenia — and after 30 years of seclusion — death in 1950.

George de le Pena, a dancer from The American Ballet Theatre, plays Vaslav Nijinsky as a naïve and awkward boy offstage and as a wonderfully mysterious creature on stage in "La Spectre de la Rose," "Petrouchka," "Afternoon of a Faun" "Jeux," and "Le Sacre du Printemps." In these intricately performed numbers, he acts out the sexual tensions and ambiguities, which tormented Nijinsky's soul. Stravinsky, who created the music for the ballet which shocked Paris in 1913, said of the man who choreographed it: "Nijinsky was a weak man, as weak as his muscles were strong…of course he made love only to the nymph's scarf at the climax of 'Afternoon of a Faun.' What more could Diaghilev have allowed?" Mr. Pena captures and conveys this struggle of the protégée and pseudo-son rebelling against the domination and restrictions of his protector.

"I am firstly, a charlatan, though rather a brilliant one; secondly, a great charmer; thirdly, frightened of nobody; fourthly, a man with plenty of logic and no scruples; fifthly, I seem to have no real talent," wrote Sergei Diaghilev to his stepmother in 1895. These sides of this complex figure are impressively brought across on the screen by Alan Bates in one of the best roles of his distinguished career. Diaghilev is at once autocratic, jealous, snobbish, vindictive, and ruthless as a manager of the Ballets Russes and as Nijinsky's lover. His guidance of the Polish youth and his discovery of Stravinsky are evidence of the man's gift for spotting talent.

Herbert Ross has made an eye inveigling movie — it's a phantasmagorical tour through the realm of the rich and the privileged during an era when eccentricity was rampant and art was — as Diaghilev noted — "the most expensive mistress in the world." The cinematography of Douglas Slocombe makes the most of lush environments and the stylish clothing of the period.

Although the strong performance of Alan Bates is what holds the film together, there are other skilled characters delineations as well. Leslie Browne is good as Romola de Pulsky, the predatory young woman who wins Nijinsky's heart and then turns out to be as possessive as Diaghilev. Alan Badel's Baron de Bunzberg, the patron of the ballet Russe who arranges the company's trip to South America, is a convincing aristocrat with a shrewd wit and jaded sophistication. Ronald Pickup's Stravinsky and Jeremy Iron's choreographer Fokine are expert studies of finicky artists.

In an interview following the success of The Turning Point and The Goodbye Girl, Herbert Ross said: "To me, plot is subservient to developing human qualities in a character. It is the humanity in a film that makes it live." Nijinsky brings life to a spectacular period of vitality in the arts — Paris during the first 15 years of the twentieth century. Yet the most fascinating dimension of the movie is its sensitive depiction of the three main characters as they grapple with dominance, submission, independence, dependence, anger, and love in terms of their sexuality. The questions raised here are worth pondering — especially in a time when battlelines are being drawn and blinders are making it impossible for straights and gays to see their common human flaws. 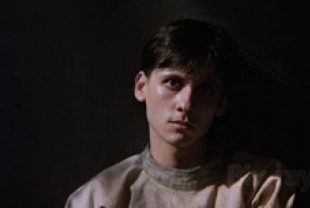