Directed by John Sayles
A compelling film about two women whose spiritual transformation is precipitated by illness.

John Sayles's new film seems like the perfect answer to Virginia Woolf's observation: "Considering how common illness is, how tremendous the spiritual change it brings . . . it becomes strange indeed that illness has not taken its place with love and battle and jealousy among the prime themes of literature." This compelling film presents a multileveled portrait of two women whose spiritual transformation is precipitated by illness.

May-Alice (Mary McDonnell) has achieved success in New York as a soap opera star on daytime television. All that is taken away when she is hit by a taxicab and sustains a spinal cord injury. Paralyzed from the waist down, May-Alice is plunged into a bottomless pit of resentment and regret. She flees to the home of her deceased parents in Louisiana.

There she soon earns a reputation as a "bitch on wheels" through her petulant and nasty treatment of a series of nurse-caretakers. Then Chantelle (Alfre Woodard) arrives from Chicago. She's a strong-willed and tight-lipped woman who is able to put some brakes on May-Alice's self-pitying behavior and self-destructive drinking.

May-Alice, who has always had trouble trying to live up to other people's expectations, has her sense of isolation reinforced by visitors. Two acquaintances from boarding school days make her feel uncomfortable with accounts of the past which confirm her memory of being an outsider. When three actresses from the soap opera come for a visit, she gets a fresh picture of what has been taken away from her.

Meanwhile, she and Chantelle struggle with their roles of dependent and caregiver, waging a daily battle for control. Only when May-Alice learns that her companion has just gotten out of a detox program for drug addicts is she able to start her own journey toward recovery. She quits drinking and starts doing her physical therapy exercises.

The women also begin to bloom a little in the presence of two appreciative men — Sugar (Vondie Curtis-Hall), a blacksmith, and Rennie (David Strathairn), a Cajun handyman. In a reflective moment, May-Alice wonders to Rennie, "How did I get to be like this?" Chantelle knows the answer to that question in her case, a fact that is brought painfully home when her father comes to visit. But gradually, she, too, begins to see the possibility of another future.

Writer and director John Sayles describes Passion Fish as a probe of "what people do when they think they're on one life path and then it gets blown in another direction." That theme will resonate with many people who have had their lives and careers uprooted by circumstances beyond their control. Both May-Alice and Chantelle find themselves starting all over again in a place they never expected to be midway through their lives. With their wings clipped, they reach out to each other as they inch their way back into life.

Sayles draws out brilliant and authentic performances from Mary McDonnell and Alfre Woodard. It is refreshing to see a film totally focused on the spiritual renewal of two women. One of the marvels of Passion Fish is that it shows how imperceptible genuine change can be. In the give-and-take of their relationship, May-Alice and Chantelle slowly share their secrets and realize how much they need each other. By the end of the film, these two burnt-out souls have renewed their zest for life. And, as is so often case, the catalyst for their spiritual change is right there in the same room. 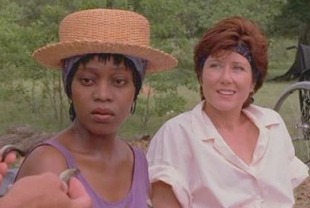 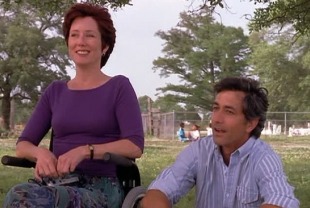