Directed by Miguel Arteta
A well-constructed black comedy about what happens to an unhappy woman whose yearning for something completely different takes her to a place she really doesn't want to be.

Justine (Jennifer Aniston) is a very unhappy 34-year-old woman with a constant hangdog expression on her face. She feels guilty over not being able to get pregnant even though her seven-year marriage to Phil (John C. Reilly), a house painter, is dead in the water. He's stoned most of the time with his bosom buddy Bubba (Tim Blake Nelson).

Justine's work at "Retail Rodeo" is a mind-numbing bore. She can barely tolerate the good cheer of Gwen (Deborah Rush), the religious enthusiasm of a Bible-quoting security guard Corny (Mike White), the wackiness of Cheryl (Zooey Deschanel), or the patronizing attitude of Jack Field (John Carroll Lynch), the store manager. Justine yearns for someone to take her away from the prison cell of her unhappy marriage and her terrible dead-end job.

Then she meets Holden (Jake Gyllenhaal), the cute 22-year-old clerk who's just been hired. She is attracted to his antisocial attitude. Making small talk with him, Justince learns that his name has been taken from a character in J. D. Salinger's novel Catcher in the Rye. Holden identifies with this put-upon youth who wants nothing to do with the phony world of suburbia. Justine and her new friend discover they have something in common: his parents don't get him, and her husband doesn't get her. Their relationship slowly unspools and eventually leads to sex at a local motel. However, Holden's fondest moments with Justine are when he gives her some stories he has written. She desperately wants to like them but finds them just too weird. Justine is stunned to realize that she's hooked up with someone who hates his life even more than she does hers.

The Good Girl is a funny and well-contructed black comedy directed by Miguel Arteta (Star Maps) and written by Mike White, who plays the Christian security guard. In the voice-over narration by Justine, we sense her fear of coming to the end of a life she's never really lived. But there is a strong self-destructive streak in this young woman whose yearnings to escape finally come to fruition — only they're not what she expected. Quite a few members of the community learn about Justine's affair before her husband does, including Bubba who extracts a payment for secrecy. In the end, her clumsy attempts to extricate herself from her sexual relationship with Holden set in motion a series of messes that make things even worse for everyone in her life. The old adage "be careful what you wish for" is given a full workout in The Good Girl. 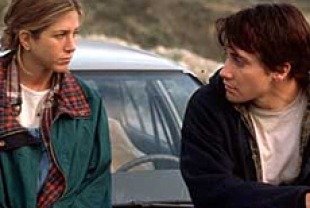